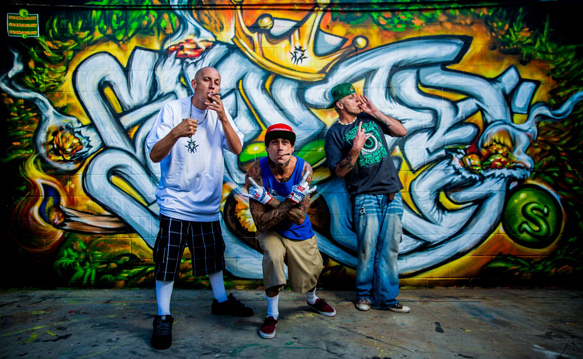 Psychedelic Hip Hop Punk Rockers, Kottonmouth Kings (KMK), from Placentia, Orange County, California, got started in 1994 with Saint, D-Loc, Richter, X, and Pakelika adamant about staying independent at all costs in their combined love of weed, free thinking, bass bumping, and being Hip Hop junkies. The year 1998 saw Kottonmouth Kings release their debut album after honing their skills with Royal Highness for Capitol Records followed by 1999’s Hidden Stash, after which, Saint Dog left the group to have Johnny Richter step into his place.  Then, 2000’s High Society started to get them noticed with the single “Peace Not Greed” topping 37th on Hot Modern Rock Tracks chart as well as video play on MTV and PS game.  2001’s Hidden Stash II: The Kream of the Krop alludes to the track set of B-sides, rarities, and remixes that did not make previous albums.  The musically diverse Rollin’ Stoned dropped in 2002, landing 51 of the Billboard 200.  By 2010, after ten albums, Kottonmouth Kings saw The Dirtball join the group and Pakelika leave.

Three additional albums and a few more lineup changes later, and 2015 has Kottonmouth Kings with the lineup of Daddy X; the singer of Humble Gods, X Pistols, and former singer of Doggy Style, Lou Dog; the drummer of Humble Gods and former drummer of Doggy Style, D-Loc, DJ Bobby B; who has since left the group, and The Dirtball are primed too released their thirteenth studio album, Krown Power, produced by Mike Kumagai, Jim Perkins, and Steve Dang as the first release for United Family Music Records along with Capitol Records set for release on August 28th, 2015.

Krown Power is an 18-track (whopping 37-track in deluxe version) album of good vibrations, love of bass and weed, and attitude set to hardcore Hip Hop, Horrorcore, and Reggae.  Take “Our City” for instance, with its laid back beat as the guys paint a picture of either walking the streets, or just chillin’ “smoking” at the end of the day.  Next, the double timed “Kronitron” hits fast and hard as the guys talk about doing anything for, and there’s no time like the present to, “smoke.”  A Caribbean vibe brings in “Audio War” as this track adds bass wars to the “smoking” motif to paint a picture of old school lowriders in parade with their speakers trying to outdo each other.  Moving onto “Permastone,” which has a noir-ish gangsta with an Insane Clown Posse influence in lyrical delivery.

Laced with plenty of guest appearances, the Trinidadian Reggae singer Marlon Asher features on the track “Pump Up Da Bass.”  This track lays back the feel Asher is known for as well as channeling another influence, 311, with a pinch of Sublime in this ode to bass beat.  Jahred Gomes from (hed) p.e. shines on “Keep Movin’,” a head-bobbing piece with influences from Cypress Hill and a delivery like old school Onyx as he anthemically states, “No one can judge me now.”  It is time to “Sink or Swim” as Kottonmouth Kings Punk leanings shine in this track with a Rancid-esque intro that settles into a Metal/Hip-Hop mashup as the guys talk about going for yours. Renaissance Man Judge D features in the next track, “Fill Your Cup.”  With a hand-raising beat, this track is the quintessential party theme.  Marlon Asher returns in “Don’t Feel Down,” a 311-esque anthemic tune of just being happy the listener is above ground. Cali-based rapper C4mula comes on the scene in “TBH.”  This track has Kottonmouth Kings’ hyper delivery they are known for as the futuristic beat plays hypnotically as they say to come real.

Moving along, Horrorcore is in the house with the Insane Clown Posse featured “Fuck Off,” a fun throwback beat complete with DJ scratching, playing to the comical social commentary delivery Insane Clown Posse is known for about those that just cannot shut their mouths when it is for their own good.  “Dope Thang” follows, returning the listener back to the love of weed and ragging on those that bring down the right to “smoke” with the car-bouncing beat.  Marlon Asher makes an encore in “Ganja Glow,” a tripped out Reggae track set to the double-timed lyrical delivery of their God-given right to smoke.  Lead singer of Reggae/Punk band Too Rude, Dog Boy is featured on the seemingly dark beat juxtaposed to the upbeat lyrics of “Good Time Zone.”  Kottonmouth Kings family member Chucky Chuck brings his brand of rhyme to “Crack the Frame,” a track with a layered beat of sounds about “smoking” with pride.  A throwback beat reminiscent of early Snoop Dogg brings in “Life in the Kingdom,” a track of the hood.  “Mary Jane” is a happy beat with visions of a psychedelic weed commercial.  Wrapping up Krown Power is the confessional ballad “Time” featuring original member Saint Dog as he reminisces about his life and the people in it…or were in it.

Kottonmouth Kings’ Krown Power delivers on their likes, namely weed (a relevant topic when this album was being produced), with some Hip Hop bass mixed in, in spades. Musically, it is a feast with some fun lyrical combinations in an otherwise one-theme album as underlying themes might get buried to the average listener in all the various references to said herb. While on the flip side, other tracks such as “Pump up the Bass,” “Sink or Swim,” and “Time” help the less noticeable social commentary-themed tunes to become relevant worldwide.  CrypticRock gives Krown Power 4 of 5 stars. 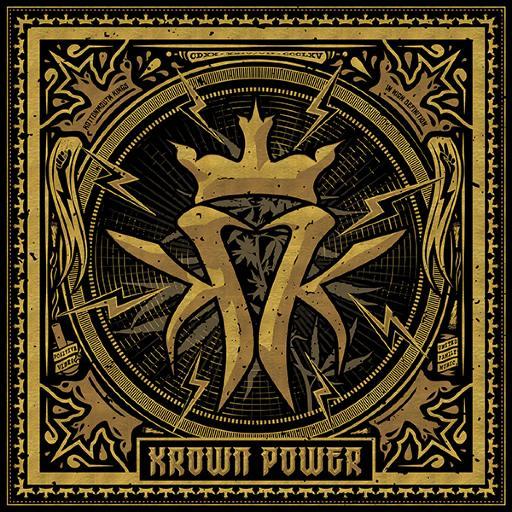