In a nostalgic living room, Christmas tree alight, a grandmother (Karen Rolston) praises her granddaughter’s drawing of her family. Her crayon captured everyone except her sister who “makes Mommy cry and Daddy angry.” Grandmother reads a tale as old as time itself about Krampus who punishes bad kids during the holidays. “But Grandmother, that’s not real.” Grandmother explains sometimes the old creeps back into our world. Uncork’d Entertainment, Funhouse Features, and Ugly Salamander Studios released to home video the film Krampus: the Reckoning on November 3, 2015, in time for the holiday season. Instead of Santa, though, the Krampus takes the lead role in this psychologically charged investigation into supernatural murders. 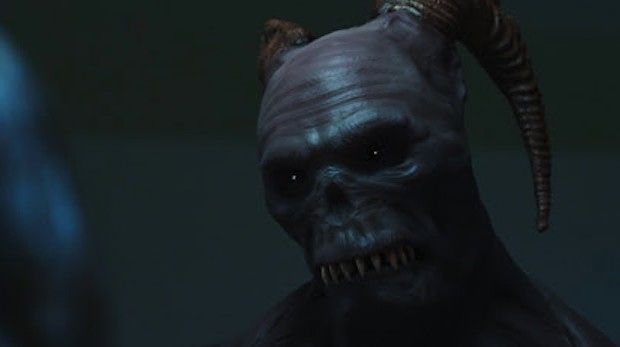 Classmates find young Zoe Eliza Weaver (Amelia Haberman: The Toy Soldiers 2014) weird. She plays with a bird corpse instead of participating in a game of tag. Zoe ventures home where her foster parents Katie (Carrie Fee: Clint 2012, Children of the Dust 2014) and Teddy (Benjamin Foronda: The Candy Flip 2011, Being Flynn 2012) treat her like an oddity and a servant, locking her in her bedroom while they snort cocaine, drink, and have sex. To pass the time while locked away, Zoe makes “worry dolls” in their image before removing a miniature stuffed Krampus doll from her sewing kit. The figure is manacled, and Zoe frees it. A creepy voice calls to the stepfather taking a cigarette break outside. He sees his assailant, a skeletal, decidedly un-hairy Krampus who lowers his horned head before the naughty parent’s skin bubbles off and he bursts into flame. After stepmother finishes a shower, where her every asset is explored for the audience, she finds her spouse’s remains. Krampus calls for her, and her blackened corpse falls beside his, littering the driveway of their Arizona track house.

Investigators find Zoe locked in her room. Child psychologist Dr. Rachel Stewart (Monica Engesser: Kidnapped Souls 2012, The Encounter 2015) is brought on the case by the investigating team headed by Detective Miles O’Connor (James Ray: Match.Dead 2009, Paranoia 2012). The head of pediatric medicine at the hospital, Dr. Tom Jennings (Kevin Tye: composer for Dance Dance Revolution game) introduced Zoe as “responsive, just disinterested.” When Dr. Rachel talks with Zoe, the girl says, “He took them because they were bad.” Instead of answering further questions, savvy Zoe diverts the conversation toward the psychologist, asking Rachel how she got a burn-scar on her wrist. Rachel reveals it is from her childhood, and then she offers to retrieve comfort items for Zoe, who asks for her dolls and sewing kit. Rachel accompanies the police to the crime scene. The home is a nice place, well kept, with decent appointments. “It’s all window dressing, though,” Officer O’Connor says. Cue creepy voice when the box is opened.

Suspicion falls on Zoe after a nurse from the hospital ends up as charcoal. The M.O. of the murder is the same, but the girl never left the pediatric ward. Zoe scribbles a crayon depiction of an angry Krampus and obsesses about her doll. When asked, the angry young girl explains Krampus talks to her and punishes the bad. Rachel leaves the interview uneasy and feeling there is something “really weird about her.” Rachel investigates Zoe’s previous guardians. Andy Kelly (Shawn Saavedra: Within 2013, Alone 2014) shows a photo of Zoe with his mother, explaining the foster child was “Hell on wheels.” She would lived with them until his father burnt to a cinder twenty years previous. Rachel leaves, confused. The child had not aged.

At Mercy Emanuel Hospital, Zoe makes Ashley Ellsworth (Angela Mann: The Meaning of Life 1983), a burn victim, cry, saying, “Fire is not your friend, but it is mine. Tell me who hurt you, and I might be able to help.” Nurse Franklin (Corin Grimm: Everything Must Go 2010) admonishes Zoe and takes away her dolls until “you learn to speak to people nicely.” When Rachel visits, Zoe draws with angry determination. She asks for yarn for a new worry doll. Rachel tells of her visit to the Kelly’s. Zoe grows violent and scratches Rachel across the face. The child is taken to her bed to calm down. There, she pulls yarn from her frayed blanket. She gives a completed doll to Amanda, saying, “Sorry I made you cry.”

Rachel meets Detective Miles at a bar where Brian the Bar Keep (William “Bill” Connor – also acts as the Krampus: Dead In 5 Heartbeats 2012, Run For Your Life 2015) keeps close watch. The couple explores their growing attraction while discussing Rachel’s lost childhood memories. She cannot shake the feeling she’s met Zoe before. A belligerent drunk makes inappropriate comments about Rachel. Detective O’Connor remains collected and in control. He recognizes the almost stereotypical drunk as Clayton Ellsworth (Nathaniel Burns). Clay had passed out drunk with a lit cigarette in his mouth and set his house on fire, nearly resulting in his daughter Ashely’s near-death. Clay, dressed in a satirical “Circle of Fate” hoodie, meets the Krampus. Rachel retires for a night of erotic dreams and terror. When her foster son LaMaar is threatened, she faces her past and her debts for the sake of love.

Evocative music by Kevin Tye and Owen Conway, including the Krampus theme and a haunting adaption “God Rest Ye Merry Gentlemen” sung by Amelia Haberman, set the mood for this tale by Robert Conway and Owen Conway (Exit to Hell 2013) of an unforgiving judge and a vengeful spirit. Despite filming in Arizona, the use of props and decorations captured a warm-climate holiday. Though many on the cast were beginning actors, this Indie Horror film packed a punch. Troubled Zoe is a complicated character, and Amelia Haberman presents a prickly aloofness that lends to the tension. The leads’ performances captured professionalism and a surprising lack of confusion in light of unbelievable circumstances. Their budding romance left viewers wanting more.

The best aspect of the story, though, was Krampus, a terrifying ancient Scandinavian folk character, and his appearances are too few. Artistic adaptations were made in the depiction of the monster. The Krampus from folk-lore bears a resemblance to a man-goat, with thick fur covering his nether regions. Most striking was the absence of Krampus’ characteristically obscene tongue lolling from its sharp-toothed mouth. This movie’s creature appeared more mummy-like. Also, he carried no sack or flails to punish miscreants, another trade-mark. However, the plot paced well, but it did not allow deep exploration of the characters. Pyrotechnics provided some intriguing visuals. Krampus: The Reckoning tells its audience that no amount of good deed-doing later in life can erase a rotten past when the Krampus is unchained. CrypticRock gives Krampus: The Reckoning 4 out of 5 stars. 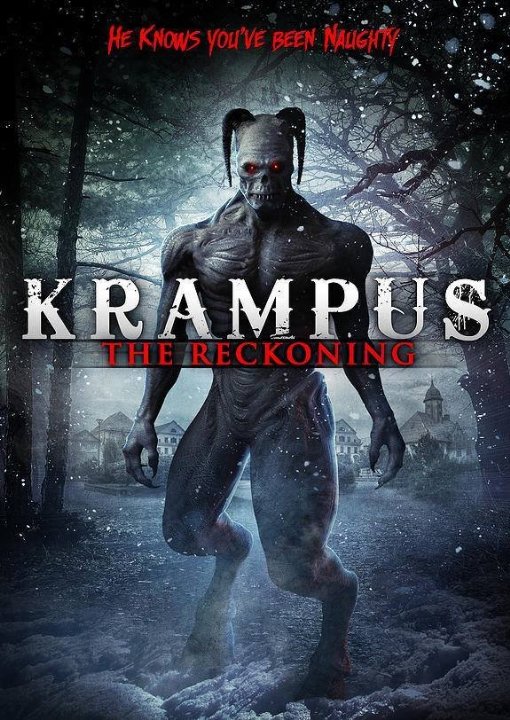 Purchase Krampus: The Reckoning on DVD on Amazon