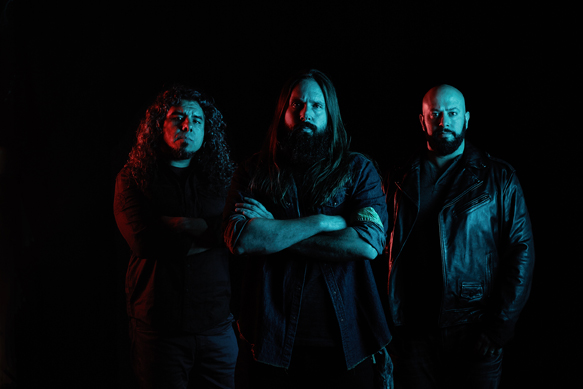 Established back in 2008, Los Angeles, California’s Kyng has traveled a long road. No different than many other Rock bands, it has not come easy for these guys. Like buying one more lottery ticket, Vocalist/Guitarist Eddie Veliz decided to give the whole band thing one last try before settling into the normal life that is a reality for most people. Thankfully, with persistence, Veliz and bandmates Tony Castaneda (bass) and Pepe Clarke (drums) stuck it out, releasing the powerful debut Trampled Sun back in 2011. Appealing to fans of bands like Soundgarden and King’s X , Kyng continued to grow, toured with a with the likes of Seether, Megadeth, Clutch, and Trivium, as well as many others. Releasing Burn The Serum in 2014, they drew even more attention, earning even more airplay in such places as Sirius XM’s Octane and Liquid Metal. Now ready to go for the gusto, 2016 sees the trio offer their third studio album, Breathe In The Water. Their second overall via Razor & Tie, they team up with the producer known as Machine (Lamb Of God, Clutch) to create a pure and genuine record that speaks from Kyng’s soul.

Released on October 7, 2016, the fourteen track album opens with rough guitars and high energy on “Pristine Warning.” Highlighted by Veliz’s vocals, he creates a sense of soaring over chaos as even Castaneda’s bass gets in on the racing tempo. The,n with heavy stomping and a relatively faster pace, “Breathe In the Water” shows off the awesome range of Veliz as he goes back and forth to fit the double edge tones of the track. Taking a step back momentarily, “Closer to the End” contains weaving guitars that wrap around the track, adding a somber touch while building with interchanging beats. Keeping with their hearty sound, they feed listeners “Follow Blindly” with a simpler beat and groovy rhythm. This irresistibly hooks in, allowing Veliz’s singing abilities to really showcase the impassioned lyrics about more than frustration, there is also sense of disappointment.

Slowing the tempo down, “Show Me Your Love” proceeds with laid back guitars and quieter, but no less powerful vocals. Pleading and demanding for intellectual intimacy, the kind that comes with truly knowing and loving someone, the message fills the atmosphere blissfully. Reminiscent of Classic Rock of yesteryear, the song quickly comes up to speed with heavier guitars, adding to the dramatic tone. Carrying over with the ending notes of the previous song, interlude “Reckoning Part 1” builds momentum reaching a quick climax before the hard-hitting “The Dead.” With a friendly guitar giving way to more sinister styling, it offers a warning and observations, if not predictions of the way life goes. Much like its title entails, “Bipolar Schemes” transitions in emotions. At first coming off like Alice in Chains, a dark vein runs a course in the song while Veliz’s voice soars in areas such as Ian Astbury of The Cult.

Mellowing out again, “Hide From You” rises up to confront a series of emotions. Rather relaxing at first, the payoff comes midway through before settling back into a calmer tone. These more black textures continue with “Song For a Broken Masque” as Veliz projects a dejected point of view. Showing it is not all bleak, “The Beginning of What Was” offers a bit of bright hope and innocence with the acoustic guitars. Just under two minutes, it features no vocals while delicate strumming and picking of the strings tell a story that is up to the listener to interpret. Segueing acoustically into “The Battle of the Saint/Lines,” it rapidly turns more dangerous as chugging guitars and loud vocals come in. Placed well, it bounces into the Iron Maiden-esque opening riff of “Not Enough.” Enamored with rough changes, the words speak of not being accepted by someone else, but saying in the end, it will be okay. That rather smooth piece is before the album ends on one of its heaviest notes with rapid and muscular guitars with “What I’m Made Of/Reckoning Part 2.”

Breathe In The Water does not play around or ask for permission to do anything, it takes on a life of its own. Solid and confident, this album mixes easier sounds with the heavier side, and gets to the grittier side of emotions. There is no hint of self-pity or forced feelings, and nothing comes across as contrived. Each track is strong and shows Kyng are comfortable in their own skin. CrypticRock gives Breathe In The Water 5 out of 5 stars. 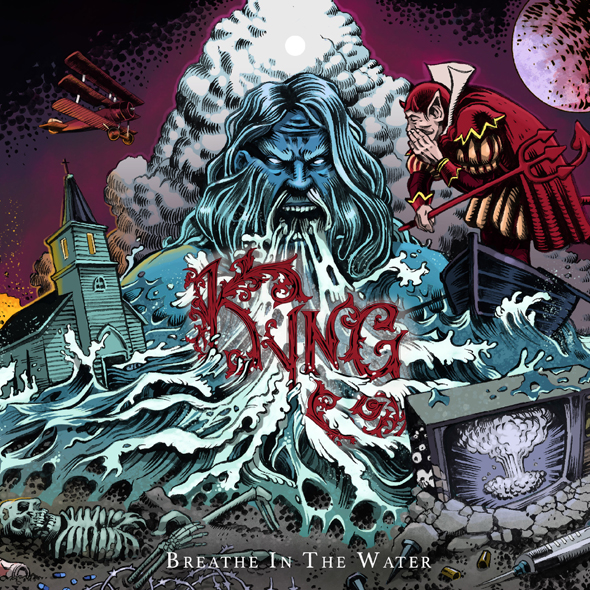