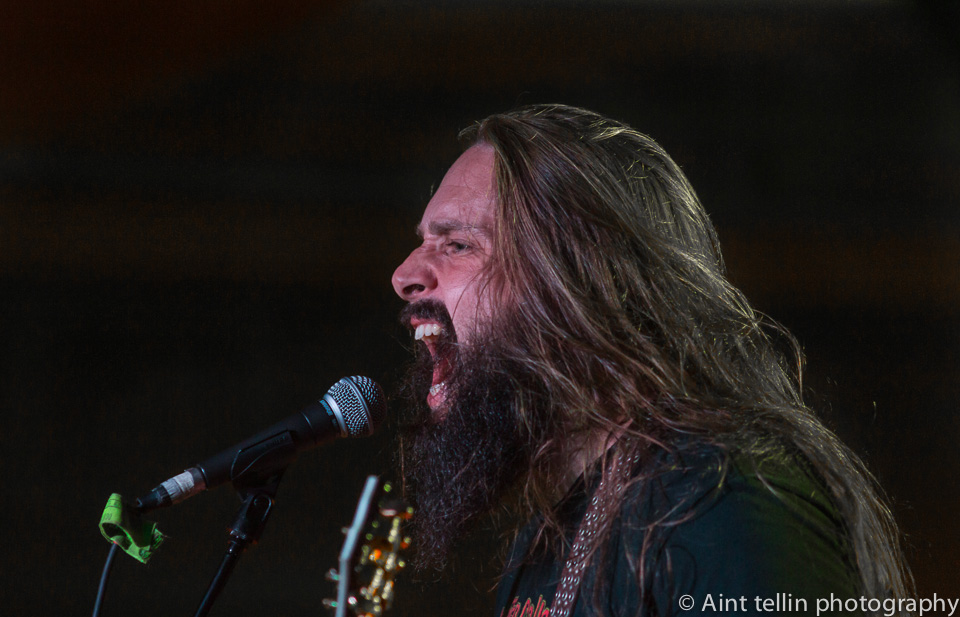 There are a lot of bands out there looking to make their presence known in the fragmented scene. While trends may come and go, straight up rock-n-roll lasts forever.  That attitude was put on display on Tuesday May 6th in The Marlin Room at Webster Hall in NYC.  Heading the bill for the evening was Kyng with support from Crobot, Anti-Mortem, Brand of Julez, and Tempest City.  Full of young, talented, and hungry musicians; this was a show rock purists eagerly showed up to see.

Starting things off was New York based Tempest City playing no-nonsense straight up rock-n-roll. This four piece band deliver duel guitar passionate tones with haunting vocals.  Clearly deriving influence from some of rock’s most influential 80’s bands such as The Cult, Tempest City’s music is full of energy and quality lyrics.  Their EP This Ain’t Bogota is out now and worth giving a listen.

Making the trip across Third Avenue Bridge into Manhattan for the evening was Bronx based band Brand of Julez.  Formed by Julian Zamora (lead vocals/guitars), and Brandon Zamora (bass/vocals), the band is completed with David Guevara (drums).  Showing confidence in their abilities, the guys blasted off into heartfelt modern rock sounding tunes.  Julian’s vocals were the finishing touch on their style which can best be described as rugged, emotional, and ear-catching.  Fans of grunge rock will dig this band.  Their debut EP SoBro Rock is out now.

Next up were national rock band Anti-Mortem.  Coming from Chickasha, OK, the Nuclear Blast signed group has been making some noise lately with their southern blended hard rock.  Recently releasing their debut album, New Southern, on April 25th; the five piece band consist of Larado Romo (vocals), Zain Smith (guitar), Nevada Romo (guitar), Corey Henderson (bass), and Levi Dickerson (drums).  With fans gathering close to the stage, Anti-Mortem rushed into heavy guitar grooves that had bodies moving.  Larado’s sore-throat vocals blazed over the top of each tune with each word sung.  Mixing catchy choruses with string bending guitar solos, each song was as powerful as the one before.  While their average age is only 21 years old, Anti-Mortem shows the chops of a band twice their age.  Their set seemed to fly by in the blink of an eye and had the audience wanting more.  It is a matter of time before these guys wake the slumber of the rock community and play bigger venues with bigger crowds.

It was at the point in the evening where The Marlin Room was at its capacity ready for Pottsville, PA rockers Crobot.  Spreading the word of rock, Crobot have been touring around the Northeast of the USA.  Consisting of Brandon Yeagley (lead Vocals, harp), Bishop (guitar, vocals), Jake Figueroa (bass), and Paul Figueroa (drums), the hard working band caught the eye of Wind-up Records and signed with the label in 2013.  Now with a strong label to back their intense rock-n-roll, Crobot are ready to take the next step in their career.

As each member took the stage they were greeted by the audience warmly.  Yeagley had the room in his command with eye-tingling soulful vocals which hit the high notes just at the right time.  Behind his long locks, Yeagley’s performance was reminiscent of a classic front man such as Robert Plant.  The groove of each song Crobot played had the energy flowing with unforgettable riffs.  Extremely enthralled in each note they performed, Crobot’s stage presence was immense and NYC loved the classic rock tones.  Their self-titled EP was released this month and is a must have for heavy groove rock lovers.

After having their ass kicked by a stellar line-up of talented openers, it was time for Southern Californians Kyng.  Packed to the gills, this crowd clearly was aware of what and who Kyng is.  Spotted among the large crowd was even VH1’s That Metal Show co-host Jim Florentine.  Kyng are now in the second stage of their career, the first began back in 2011 with their album Trampled Sun.  After spending years on the road in support of the solid debut, the band played with everyone from Megadeth, Clutch, and In This Moment. The band has built a reputation for no frills straight-up in-your-face rock.  Now in 2014, the band has themselves a new label with Razor & Tie and unleashes their sophomore album Burn the Serum.

Wasting no time, guitarist/vocalist Eddie Veliz broke into the thick groove of new song “Burn The Serum”.  With powerful stick work of Pepe Clarke and throbbing bass of Tony Castaneda, it is difficult to believe this band is only a three piece.  Each song to follow was full of luscious and vibrant rock tones including “I Don’t Believe”, “Pushing and Pulling”, and single “Electric Halo”.   Possessing inflections similar to that of Chris Cornell, Veliz’s delivery was not only timed perfectly, his emotion was unmatched.

Midway through the set the band showed the mixed crowd of young and veteran fans a little bit of their root influences with an absolutely insane cover of Van Halen’s “Hot For Teacher”.   If you closed your eyes long enough you would think Van Halen entered the room to play the song.  Moving along, the band bounced back and forth between tracks off both their albums with songs like “Sunday Smile” and “Falling Down”.  With an already imposing performance, the evening closed out with Jose Mangin of Sirius XM coming onto the stage to perform a cover of Pantera’s “Revolution Is My Name” with Kyng.

Kyng are a band ready to explode.  Having played on big stages with big crowds, granted the fans a chance to see them in an intimate venue like this is an absolutely treat.  If you missed this tour there will be another chance to catch them out in July with Black Stone Cherry.