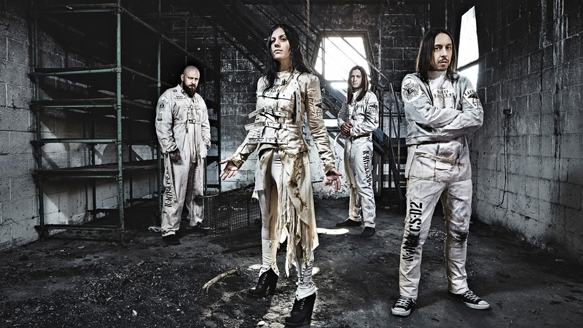 There is something very romantic about Italy’s Lacuna Coil. Their music has always held a Gothic quality, predominantly heightened by the powerful and haunting vocals of Cristina Scabbia. And like the captivating city of Milan, where the band began its journey as Melodic Metal heavy-hitters, Lacuna Coil, which includes current members, Cristina Scabbia (female vocals), Andrea Ferro (male vocals), Marco Coti-Zelati (bass/keyboards/guitars), Ryan Blake Folden (drums), and Diego Cavallotti (guitars), appears to be experiencing a renaissance. The band’s eighth studio album, Delirium, released on May 27, 2016, is a definitive rebirth, proving change is quite often necessary for growth, and allowing the band to dig deeper into their souls and offer the world a more confident and developed sound.

The album opens with the high-octane “The House of Shame.” Ferro’s guttural roar against pounding drums is soon balanced by the intoxicating and angelic vocals that float atop an electrically charged bass riff. The song shows a fearlessness and focus, and it is that combination that resides on Delirium, and generates a new excitement for a band whose career has spanned over twenty years. The marginally heavier sound continues in “Broken Things,” which also incorporates Lacuna Coil’s more traditional sound when Scabbia’s vocals take over. Ferro continues to imbue aggressive growls and both he and Scabbia are able to play off each other as the song reaches its peak and takes on a deranged operatic quality.

The title track again elicits classic Lacuna Coil. There is a dream-like, hallucinatory quality to the song as a Middle Eastern sounding element creepily chimes in the background. The song is dominated by Scabbia, who delivers powerful vocals against resounding percussion and an aggressive bass line. There is an attack, a seemingly renewed passion that permeates through Delirium, and with it, the band has added layers and textures that keep us wondering what will come next.

In “Blood, Tears, Dust,” they begin with an electronic twist before completely assaulting the senses with Ferro’s feral growl.  The song keeps your head spinning as it moves from lightning speed guitar riffs, Gothic keyboards, Scabbia’s ethereal vocals and, at one point, an almost baroque sounding section. Yet, it never feels like it falls off the rails and provides the audience with plenty to chew.

The pace changes a bit with “Downfall,” which again features Scabbia’s mesmerizing vocals.  It is an atmospheric and softer track centered on emotional impact, with a soaring guitar solo at its climax. But, listeners are given another turn in “Take Me Home.” There is an eerie and jarring feeling that takes over when kids recite any kind of sinister rhyme. It raises the creep factor to a new level, but that spookiness is quickly replaced with an alluring and sensual chorus. It is a dark and memorable track that feels cinematic in scope.

“You Love Me ‘Cause I Hate You” continues to supply a sinister atmosphere with Scabbia’s vocals sitting in her lower register, generating a somewhat sultry and equally menacing sound. The song builds as Ferro’s scream pierces through with layers of Scabbia’s haunting voice soaring in harmony. “Ghost in the Mist” and “My Demons” are effectively abrasive with pounding rhythms against a simplistic guitar melody. Ferro cuts like a knife with his gritty roar producing an angry and brooding sound against the purity of Scabbia’s vocals.

“Claustrophobia” is another track that embraces Lacuna Coil’s signature sound with Scabbia and Ferro playing off each other as each vocal answers a challenge. Accompanying their pained vocals, there is a heavy undercurrent filled by driving percussion and bass, eventually reaching a melodic guitar solo midway through. But, it is the richness of the bass that gives this track, along with the rest of the album, a more rounded sound.

The final track, “Ultimo Ratio,” is a no-holds-barred ending to an album that throws down the gauntlet. It incorporates some more electronic bits, but it  is the full-bodied bottom end that penetrates every cell of your being as Ferro breathes fire into his vocals and Scabbia transports the listener to new heights. She allows the soul to take flight as turmoil ensues.

Delirium redefines everything listeners thought Lacuna Coil was capable of. They have created a world that fans are able to get lost in. There is a paranormal and schizophrenic aspect to the album that reads like an episode of Penny Dreadful, and it is a welcome escape. CrypticRock gives Delirium 4 out of 5 stars. 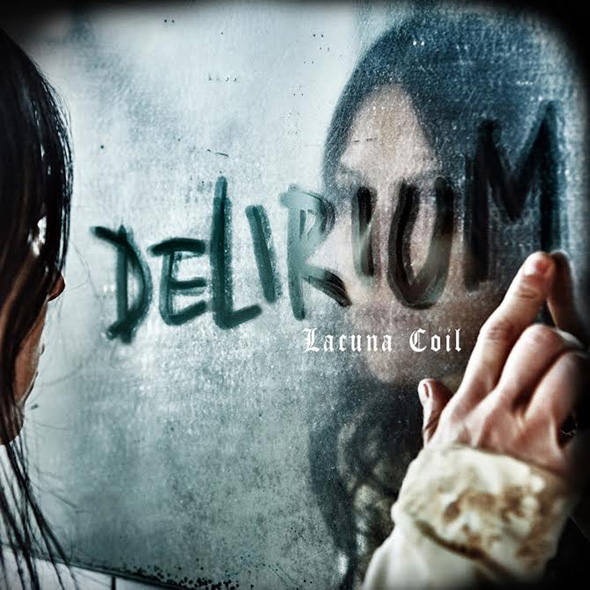