As sure as the sun-soaked shoulders of West Coast teens strung out on boredom and impenetrable youth, the Windy City fought. Threatening a classic midwest ice storm for the long awaited return of its Americana-anthem, apathy-Pop queen. Perhaps the ice storm did close multiple schools and government buildings, and perhaps commuter travel was indeed nightmarish. Perhaps all those things held truth, but perhaps it was all a farce; for deep within the United Center in Chicago, IL on Thursday, January 11, 2018, a salty-breeze blew dewy kisses across youthful cheeks and the scent of gardenias wafted from braided hair and flower crowns. Wide bell sleeves tickled elbows and crushed velvet pants smoothed over the sepia-drowned crowded arena. Lana Del Rey was near.

Announcing her first headlining tour since 2015’s Endless Summer Tour, Del Rey is currently on a three month touring circuit with stops in the US, Australia, Canada, and Europe. Performing the LA To The Moon Tour in support of 2017’s Lust For Life album, Del Rey brought along special guest Jhene Aiko and, on select dates, Kali Uchis. Only a few days before Chicago, Del Rey was forced to cancel her Kansas City, Missouri performance due to coming down with the flu. Cancellation rumors ran wild and loud, spreading their anguish across social media outlets, wishing all the voodoo magic towards the singer’s speedy recovery. Unsurprisingly, a little love goes a long way. Del Rey is a woman of determination with the backbone of a true New York native: there would be no more canceling.

As the witching hour grew near, a hazy vibe coated the arena with glossy, Lana-esque teen pouts and the background croons of Aretha Franklin, Otis Redding, and Diana Ross. It was only fitting that the Queen of Soul preface the Queen of Monroe-core Cabaret. Opening Artist Jhené Aiko flounced onto the stage in a metallic silver jacket and matching platform shoes surrounded by foliage props and a large harp. Aiko’s crystalline register assuaged the crowd with lofty vocals and elastic symmetry. Performing songs such as “Jukai,” “Oblivion,” and crowd favorite “Sativa,” Aiko ended her set with a calming, meditative, spoken word and the 2013 Sail Out track, “Stay Ready.”

As the house lights dissolved into darkness, fans eagerly released pent up anticipation in wails of accolade and ecstasy. Two female dancers/background vocalists appeared atop a large beach scenery (palm trees, lounge chairs, and large faux rocks included) spanning the length of the stage. Backlit in warm lights, the rocks cast large shadows over the crowd and further illuminated the arena with a looping black and white video of the ocean on a large LED screen.

The mid-century-mod queen of Sigh-chedelic drifted onto the stage upon slim heels and a shoulder-baring metallic dress. Two small clips collected wispy strands of Nancy Sinatra-pouf’d hair at the sides of her face and no, Lana Del Rey did not come to play video games.

Settled among the stage props was a live band complete with upright bass, baby grand piano, as well as acoustic and electric drums. The first chords of “13 Beaches” vibrated the room and liquefied fans into a dizzying vortex of screams. Del Rey delicately walked to the center of the stage and majestically hovered in absolute surrender to the song. Savory-rich alto notes escaped her tight-lipped expression, letting a sneaky smile or two break through the dramatic performance. Freeing her hands to dance across an invisible breeze, the singer moved in slow-motion sways and hypnotizing bats of her long, thick lashes. The saltwater-taffy pulling of a sugary-sweet falsetto maintained the precision and patience Del Rey so elegantly built up. The Lust For Life track exposed Del Rey’s seamless key transitions and epitomized her absorption into everything she sang.

As the song came to a gentle close, Del Rey leisurely shimmied down onto her knees and folded herself flat on the floor of the stage with both backup dancers mirroring her position on either side. The three women lay in dramatic bedroom-floor-fantasy fashion, writhing in enticing motion as the camera captured them from above and projected onto the screen. Rewinding to 2014’s Ultraviolence, Del Rey produced an alluring lie-down rendition of “Pretty When You Cry.”

Raising up towards the end of the track, the whimsical songstress continued her dreamy set atop a small riser of faux beach rocks. “Cherry” deliciously faded into an outro of Simon and Garfunkel’s “Scarborough Fair” accented by misty vocal runs and nostalgic romance. “Born To Die” roused the ready-and-willing crowd below, echoing in magnificent sing-along. “I feel so lucky to be back here, in such a big room,” Del Rey lightly spoke, “thank you so much.” She continued on with “Blue Jeans” and “White Mustang.”

Halfway through her set, Del Rey simulated the music video for 2012’s Born To Die track, “National Anthem.” The original music video opens in a vignetted press conference with Del Rey standing near a podium of microphones sensually singing “Happy Birthday Mr. President” a la Marilyn Monroe. Opening the live version with the same graphics as her music video, Del Rey performed a meticulous (and equally sensual) acapella version of “Happy Birthday” sliding into “National Anthem” with syrupy delight. The veiled political theme extended into “When The World Was At War We Just Kept Dancing.”

“This next song was the very last one [written for Lust For Life],” Del Rey’s silky voice echoed, “the song ‘Change’…which I really love and am proud of…and all the songs really.” With celestial timbre, Del Rey began “Change” atop the large rock on the left side of the stage. As she serenaded the crowd, a flawless transition melted into “Black Beauty.” Two wooden swings entwined with ribbons, lace, and flowers descended from the rafters on either end of the stage. Both dancers sat upon each swing and gently rocked as the ribbons and lace drifted around them, back and forth. Fading out of “Change,” Del Rey sailed into “Young and Beautiful,” a single she contributed to the soundtrack of The Great Gatsby in 2013. The medley of songs had a transcendent musical arrangement with Del Rey providing lustrous vocals.

Digging into the vault, Del Rey also performed the infamous leaked track, “Serial Killer.” Written in 2011, the song never made it on any of her albums and instead became a true Lana Fan staple. Notable songs “Ride,” “Video Games,” “Summertime Sadness,” “Ultraviolence,” and the currently controversial “Get Free” (which is being taken to court by Radiohead over alleged similarities to their song “Creep”) absorbed the almost 2 hour set.

Most recognized for her nods to California dreamin’ and Hip-Hop impregnated ballads, Del Rey’s signature originality is a beacon of talent and vanquish. With the final notes of “Serial Killer” dissipating, the artist asked what time it was and sat down on the stairs leading from the front of the stage. Gingerly unstrapping her heels, she walked down the stairs and to the barricade where she traveled across a sea of fans taking selfies and signing items.

Along the way, fans pressed single roses, a bouquet of purple flowers, a flower crown and many cards and notes into her open arms. Perhaps behind closed doors she freely offers that wide, blissful, authentically joyous grin possessed with those fans. But this was not a smile that is regularly seen outside of media photos. The complete awash of happiness and gratitude lifted the corners of her mouth in absolute unbridled euphoria, and could not be conveyed any better. “This is our last one,” she said, after climbing back up to the stage and remaining barefoot, “and I just wanna let you know how lucky I am to be here. We’ve put on so many shows and this is the best one… I know pretty much everyone in the front row.”

Del Rey’s face lit up at a glance towards the barricade fans and with lively detonation, ended the night with the Born To Die hit, “Off To The Races.” Perhaps there was an ice storm beyond those arena walls; perhaps a lingering illness still plagued. Perhaps Lana Del Rey really did visit Chicago that night; gifting sun and sand, and flowers and peace. 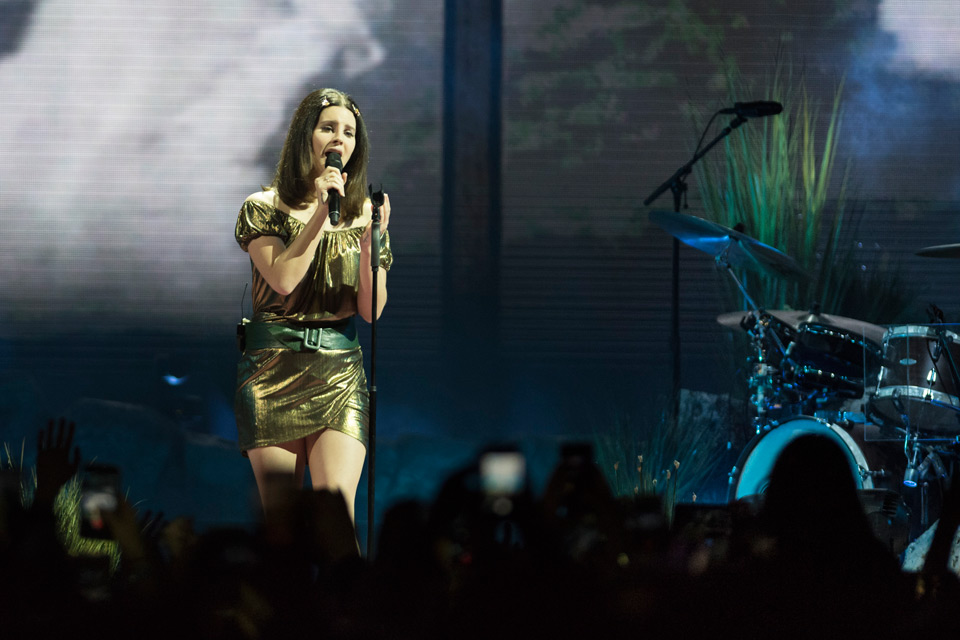 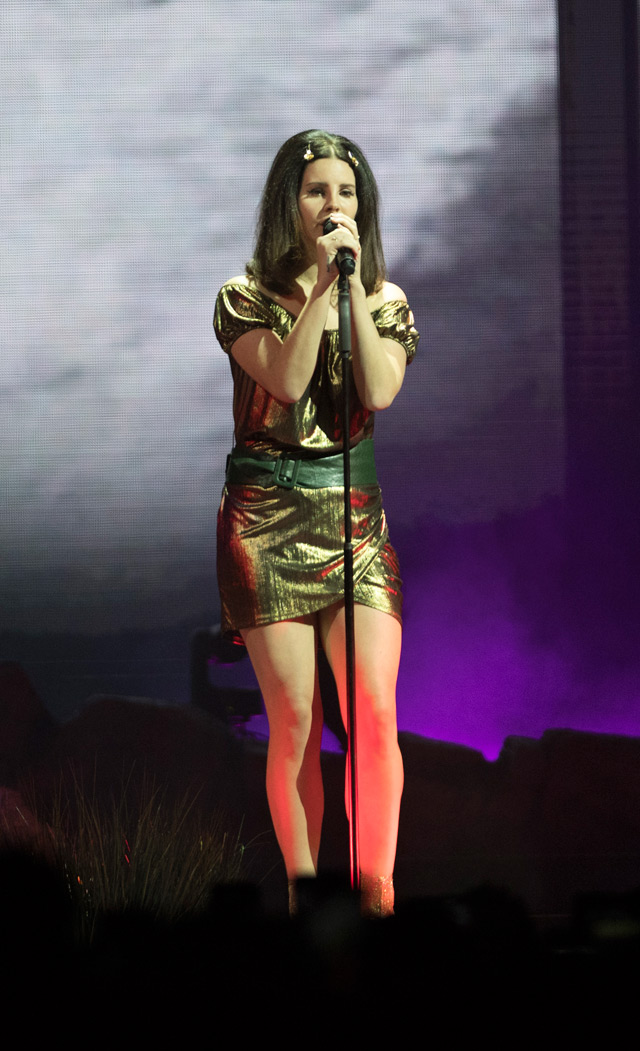 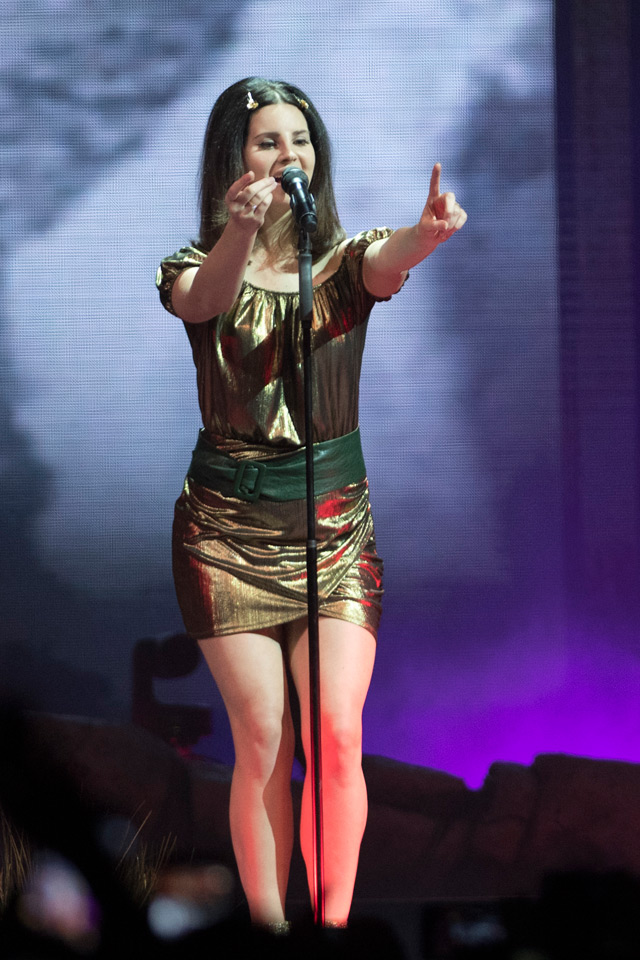 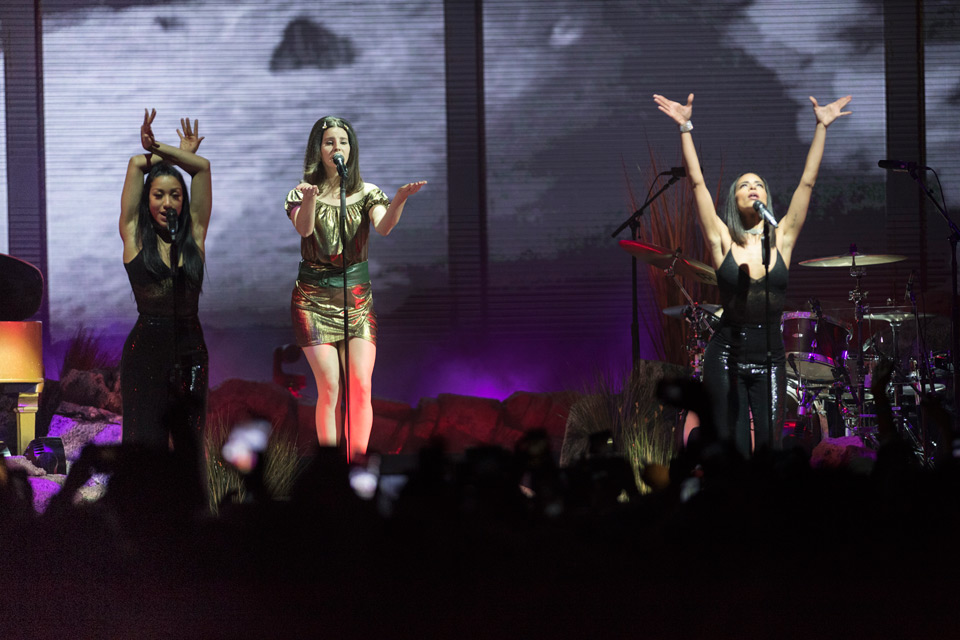 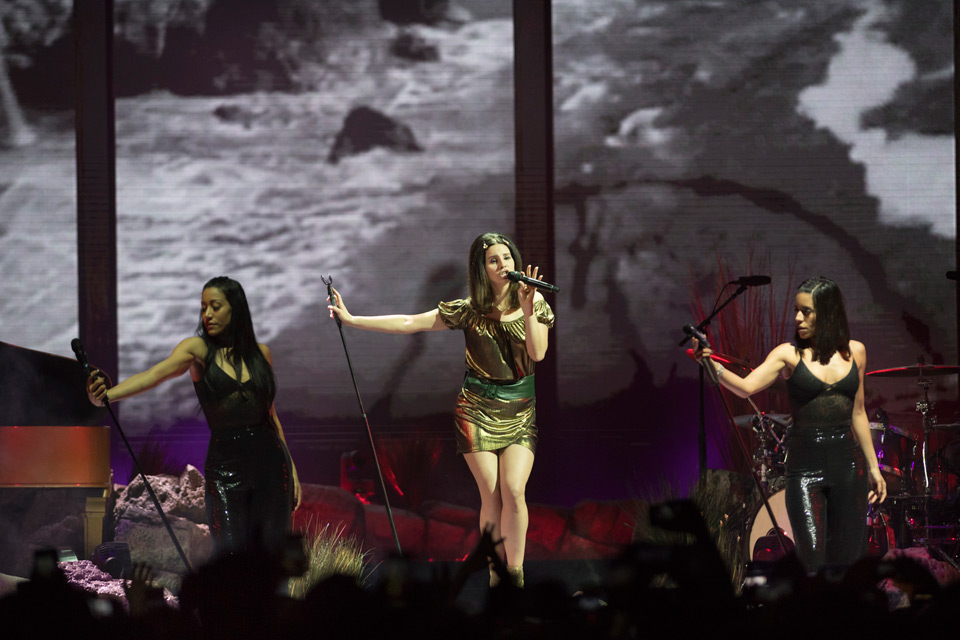 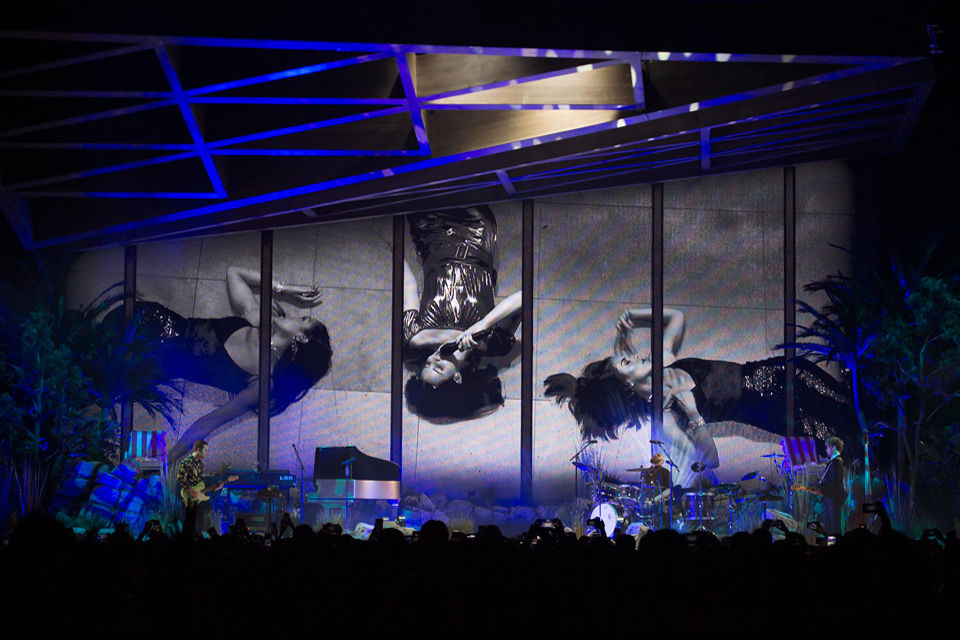