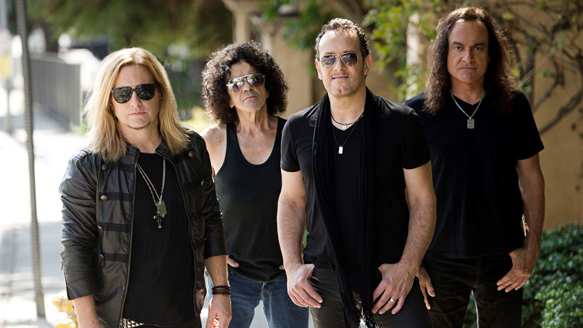 From the ashes of Heavy Metal band Dio, original members – Guitarist Vivian Campbell, Bassist Jimmy Bain, and Drummer Vinny Appice – set their eyes on finding a way to keep their late, great leader Ronnie James Dio’s legacy alive. Starting as casual jams between former bandmates, in 2011, it soon grew into a reunion as the musicians brought in Vocalist Andrew Freeman (Offspring, Lynch Mob) in 2012 to form a new band called Last In Line. Taking their name from the 1984 album The Last in Line, the new band would be the first time since 1985’s Sacred Heart album where the three musicians would be working together as a unit.

Performing live shows out in Los Angeles, CA soon led to others in the UK and Japan. Provoking excitement, the band would sign on with Frontier Records and begin recording original material together in 2014. That material now sees the light of day in 2016 in the form of their debut album entitled Heavy Crown. Released on February 19th, the album was produced by Jeff Pilson, formerly of Dokken and current of Foreigner. Eleven tracks in total, the album has quite a buzz around it from Dio fans curious to see what the band sounds like after a twenty-seven year hiatus apart.

The labor of love begins with the funky “Devil In Me.” This opening track, which was the world’s first taste of what Heavy Crown had to off, sets the bar high for the rest of the album as the clipped riff drives with the drums hammering out the beat as Freeman comes out swinging with his vocals.  Next, “Martyr” keeps the pace going head-on. As a matter of fact, on this song, Last In Line amps up the tempo to high octane as the drums kick double time while the guitars feel a bit slower. Then, Campbell’s solo shreds as the group sings about being martyrs to life.

Moving on to “Starmaker,” the shredding continues, even as the tempo slides a bit. There is a brooding feeling to the drums 1-2 cadence before the song opens up with the guitar solo.  Freeman seems to be singing, metaphorically, of the entertainment industry using artists until they are spent, and still are milked. Another interpretation is the toxic relationship that builds people up, only to then tear them down.  Then comes “Burn This House Down” with a Bluesy flavor, sharp guitar, and drum strokes that elongate as the chorus kicks in. From here, their alternations throughout the rest of tune progress with the group singing of the euphoria of performing.

Having a Motörhead/Dio vibe, “I Am Revolution” features a Speed Metal melody played with the bass going double time, making said melody infectious, so that listeners will be jumping/moshing. Dark defiance brings in “Blame It On Me,” the guitars riffing sharply, the drums bone-jarring deep, Freeman calls out his ex, accusing her as playing the victim, which is a shame, but it is okay, he will take the blame. With an anthemic/Bluesy beat, “Already Dead” has another fast-paced bass riff that slows slightly at the chorus to punctuate that his ex needs to get him out of her head, because he has already to her.

Bringing the tempo down a bit, “Curse the Day” comes in with a plucky riff that turns into a melodic tune in a quasi-Power Ballad that belies the cutting kiss off lyrics. Even in the anger, there is a sadness in the solo. “Orange Glow” is a rocker with a traditional headbanger’s beat as the bass and drums work in tandem accompanied by the guitars as the group sings about the bottom falling out of a relationship.  The album’s title track, “Heavy Crown,” is a Bluesy bit with a Hard Rock turn as there seems to be a warning to get yourself in order before the final curtain call. Closing out Heavy Crown is a song entitled “The Sickness.”  Not to be confused with Disturbed’s 2000 track “The Sickness,” this piece materializes musically from the ether with a mid-tempo melody that builds as the track continues to an interweaving melody that gets beautifully chaotic as the group sings about a bad relationship that needs to be rid of.

Sadly, Heavy Crown would be Bain’s final work as he tragically passed on January 23rd at sixty-eight years of age. A death which came suddenly, Heavy Crown is an album Bain would certainly be proud to see fans enjoying. It is an album filled with life, strong song structures, and a passion Dio himself would smile at. CrypticRock gives Heavy Crown 5 out of 5 stars.