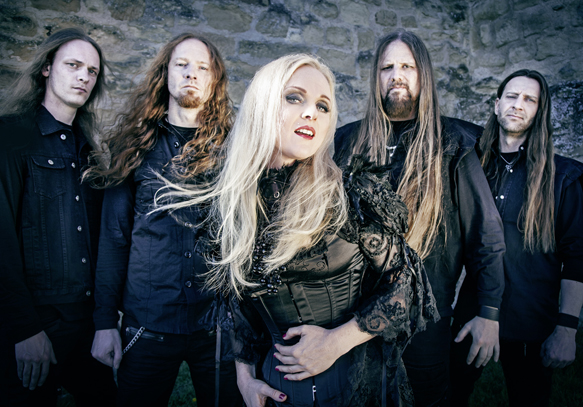 Setting the bar for Symphonic Metal over the past decade, beginning with their 2004 debut Lovelorn, the German-Norwegian band, Leaves’ Eyes has continued to inspire and pave the way. Their fusion of symphonic melodies, Folk music, and Metal creates a vivid backdrop to the Scandinavian sagas and myths found in the songs.

At the forefront of Symphonic Metal, Leaves’ Eyes summons forth ancient legends and stories in many of their works. Leaves’ Eyes is considered to be pioneers of the “beauty and the beast” aesthetic of vocals. Formerly of Theatre of Tragedy, Liv Kristine’s hauntingly ethereal vocals and Atrocity’s Alexander Krull’s Death Metal growls play off each other – a quality that adds both flavor and depth to the music. Their vocal stylings – backed by Metal guitar riffs and orchestral music – create an epic piece that takes one on a journey into Scandinavian lore.

Now after building a strong fan base over the course of the years, Leaves’ Eyes returned September 18, 2015 with their sixth overall studio record, King of Kings. Marking their first release away from Napalm Records, the band joined up with German Metal label AFM Records this time around. Joining Liv Kristine and Krull is main songwriter as well as long-time bassist/guitarist Thorsten “Tosso” Bauer, along with new additions Peter Streit on guitar and Joris Nijenhuis on drums. Running just over forty minutes, the album is a total of eleven tracks and is the shortest running time for a Leaves’ Eyes record since 2005’s Vinland Saga.

King of Kings itself is an amazing amalgamation of diverse musical elements. Those familiar with the Saga of Harald Fairhair, the first King of Norway, will have a deeper appreciation of the piece. The album explores the death of his father – Halvdan the Black and Harald’s rise to power. “Sacred Vow,” details his promise to Gyda not to cut his hair until he was the sole ruler of Norway – leading him to conquer all of Norway and unite the chieftains under his rule.

“Sweven” opens up with Folk-style strings, steady drums, and Liv Kristine’s ethereal vocals creating an atmosphere of another time. The chanting is reminiscent of the warrior culture upon which the album’s story is based. Serving as an introductory piece into Harald’s Saga – the spoken piece similar to ancient oral traditions – the song blends almost seamlessly into the next track, “King of Kings.” Here, the Metal guitar riffs and Krull’s vocals call forth a primal quality in counter to Kristine’s high tones and the symphonic elements. Throughout the album, the tempo picks up and continues to rise and fall – parallel to the events of the Norwegian saga.

Beginning with the sound of hunting horns in the third track, “Halvdan the Black,” the intensity picks up. Krull’s vocals have more of a presence in this piece, with Liv Kristine and a symphonic chorus providing a narrative aspect. Bauer’s bass and Nijenhuis’ drums get the blood-pumping. Backed by Bauer work on guitar, Liv Kristine steps back into the vocal forefront in “The Waking Eye.”

“Feast of the Year” opens with high-spirited Folk music interlude, segueing into the Folk Metal sound “Vengeance Venom,” both of which bring to mind a great feast hall in which warrior-kings and vassals meet. In “Sacred Vow,” both Bauer and Nijenhuis work together to pick up the tempo with amazing guitar riffs and rapid-fire drumbeats. Krull’s atmospheric, edgy production enhances Liv Kristine’s lyrical voice. Featuring additional vocals from Epica’s Simone Simons, “Edge of Steel” has a very martial quality with a cadence quality to the rhythm; one can envision warriors marching off to battle under banners, to the sound of war-drums.

In “Haraldskvæði,” the pace slows. With soft tunes, and whisperings in the background, Liv Kristine’s somber tone paints a broad, epic scene of a life of battle. Even with the occasional pick-up of the music, Liv Kristine keeps her steady tone similar to some of the ancient oral traditions. One can imagine a sweeping vista of the aftermath of a battle with Harald standing amongst the fallen. The longest composition on the record, “Blazing Waters” has a return of Folk Metal quality. Collaborating with Lindy-Fay Hella of Wardruna, the Folk Metal aspects are subsumed by Krull’s growling vocals and Bauer’s guitar battling Liv Kristine’s operatic vocals and the symphonic chorus. In the “beauty and the beast” aesthetic, for which Leaves’ Eyes is renowned, one can imagine the two styles battling each other, vying for control of the song. Nearing the end of the album, the overall theme of the album feels as if it is coming to a crescendo. Music becomes livelier with “Swords in the Rock” with victory howls and shouts, and lively vocals. Again, one would feel like they are back in a mead hall celebrating a great triumph and victory.

King of Kings will take listeners through a range of emotions. Furthermore, Liv Kristine’s elegant vocals will leave the audience with haunting images of a bygone era. Krull’s growling vocals bring to mind the berserkers used by Harald. This is all brought together by music of Bauer, Nijenhuis, and Streit, along with the London Voices choir ensemble brings Harald’s Saga to life and will keep the listener engaged. Above all, the natural use of original instruments original Nordic and Celtic instruments and percussion, along with White Russian Symphony Orchestra for the symphonic parts make this musical effort in-depth, compelling, and complex. Leaves’ Eyes dedication towards the quality of their work has resulted in a masterful blend of diverse musical styles with the Norwegian Saga of Harald – First King of Norway. CrypticRock gives King of Kings 4.5 out of 5 stars. 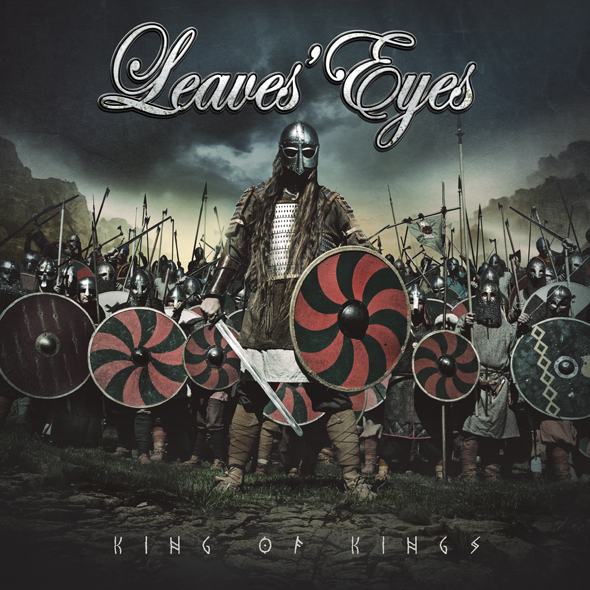