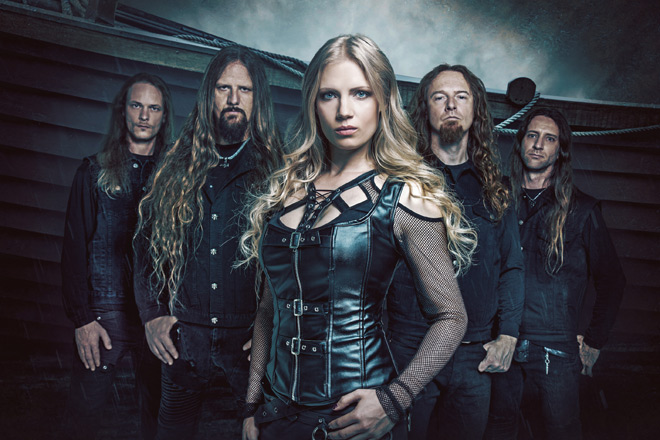 Prepare your alehorns for celebration and head for the high seas of adventure, Leaves’ Eyes are set to make their triumphant return with Sign of the Dragonhead on Friday, January 12, 2018, thanks to AFM Records.

German-Norwegian Symphonic Metal alumni Leaves’ Eyes were formed in 2003 by then Vocalist/Lyricist Liv Kristine, former lead singer of Norway’s Theatre of Tragedy, along with the entire lineup of Germany’s Atrocity. Known for their topical affinity toward Norse mythology and Viking epics, Leaves’ Eyes would go on to release six albums – ranging from 2004’s Lovelorn to 2015’s King of Kings – while sharing stages with the exemplary likes of Moonspell, Blind Guardian, and Sonata Arctica.

In April 2016, the band announced that they had parted ways with Liv Kristine, revealing to fans that her replacement would be Finnish Vocalist Elina Siirala. Now with Siirala road-tested as well as fan-approved, and the band looking toward a bright future, Leaves’ Eyes – Vocalist Siirala, Vocalist Alexander Krull, Guitarist/Bassist Thorsten Bauer, Guitarist Pete Streit, and Drummer Joris Nijenhuis – return to pillage with their first offering since the departure of Kristine and their seventh, full-length studio collection, the eleven-song Sign of the Dragonhead, which was produced by the man himself, Alexander Krull.

Load up your Viking ships and head for the high seas as Leaves’ Eyes kick off the collection with their first single/video, the beautifully theatrical tale of album namesake “Sign of the Dragonhead,” a rocking, lightning strike at the end of the world. This moves the band fluidly into their second single/video, another sea-faring journey, “Across the Sea,” where they incorporate some Folk elements into their luscious storytelling.

Siirala’s vocals soar to operatic heights on “Like A Mountain,” moving the band toward “Jomsborg.” Named for the legendary Viking stronghold along the southern coast of the Baltic Sea, in what is modern day Germany and Poland, “Jomsborg” continues to incorporate Folk elements alongside Siirala’s enchanting vocals and Krull’s death growls. There is a step down into gentler territory on the meandering fairy tale presentation of “Völva,” while “Riders On the Wind” feels celebratory and injects a Celtic dose of bagpipes into the musical mix.

Power ballad “Fairer Than the Sun” steps the pace down even further, truly highlighting the gorgeous harmonies of Siirala. Thankfully for us Metalheads, the mesmerizing “Shadows in the Night” amps the pace back up and resettles that ominous, dark, Gothic fog over the band. Though, in truth, it is the album’s sole offering that does not necessarily inspire immediate images of Leif Eriksson, Ragnar Lothbrok and legendary plunderings. It segues splendidly into the exquisite instrumental offering, “Rulers of Wind and Waves,” which only includes the gentlest of vocal coos amidst drums and gorgeous, Folk-tinged instrumentation. While much of Sign of the Dragonhead allows new siren Siirala to shine, this is one track that puts the entire spotlight onto her superbly talented bandmates.

Grittier “Fires in the North” goes darker, deeper into the dirge with Krull’s guttural offerings alongside Siirala’s always flawless operatics. The end result here is the visual of fires burning in a distant, snow-covered village, populated by individuals with flames that burn hungrily inside their triumphant hearts. It is a beautiful stand-out for the collection and it flows flawlessly into the grand finale of “Waves of Euphoria.” A continuation of the band’s beautifully Gothic, symphonic sounds, this is a splendid representation of Leaves’ Eyes 2018 and Sign of the Dragonhead, as a whole. Melodic, massive, harmoniously gritty, the nearly eight-minute epic “Waves of Euphoria” provides a delightfully impressive ending to a stunning offering from one of Symphonic Metal’s finest outfits. 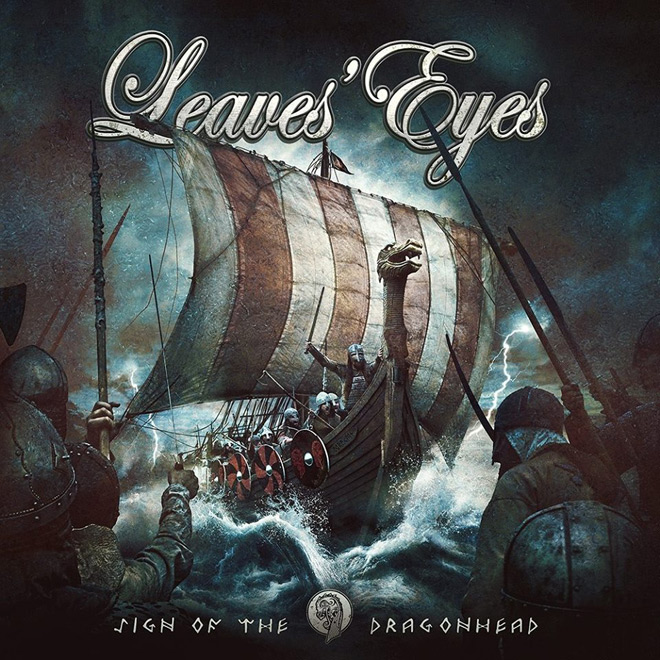