At a live multi-media press conference from MILK Studios in Los Angeles, Chester Bennington and Mike Shinoda of LINKIN PARK and Jared Leto of THIRTY SECONDS TO MARS announced they will join forces this summer for The Carnivores Tour, with special guest AFI.

Fans were able to watch and participate in the hi-tech conference in real-time, through VyRT, an interactive social media theater that enables live events to be broadcast in high quality worldwide.

The Carnivores Tour, sponsored in-part by Infinity and promoted by Live Nation, will kick-off on Friday, August 8 in West Palm Beach at the Cruzan Amphitheatre and will hit 25 cities in every part of the country and will include three shows in Canada.  The three multi-platinum bands will bring an unforgettable night of music featuring some of the biggest rock & alternative radio hits from the past decade.

In explaining the unusual name of the tour, co-lead singer of LINKIN PARK Mike Shinoda says, “Carnivores is a metaphor that is meant to convey an appetite for something visceral and substantive, and I feel that’s exactly the hunger this tour will feed.”  Jared Leto of THIRTY SECONDS TO MARS adds, ‎”We are so excited to join our friends on this epic journey. It’s going to be the adventure of a lifetime.”

Tickets for The Carnivores Tour will go on sale beginning Friday, March 7 at www.livenation.com and the band’s websites. Members of the LINKIN PARK and THIRTY SECONDS TO MARS fan clubs can take part in an exclusive presales TODAY at 3:00 PM PST and 5:00 PM PST respectively.   More information available at www.lpunderground.com and www.thirtysecondstomars.com. 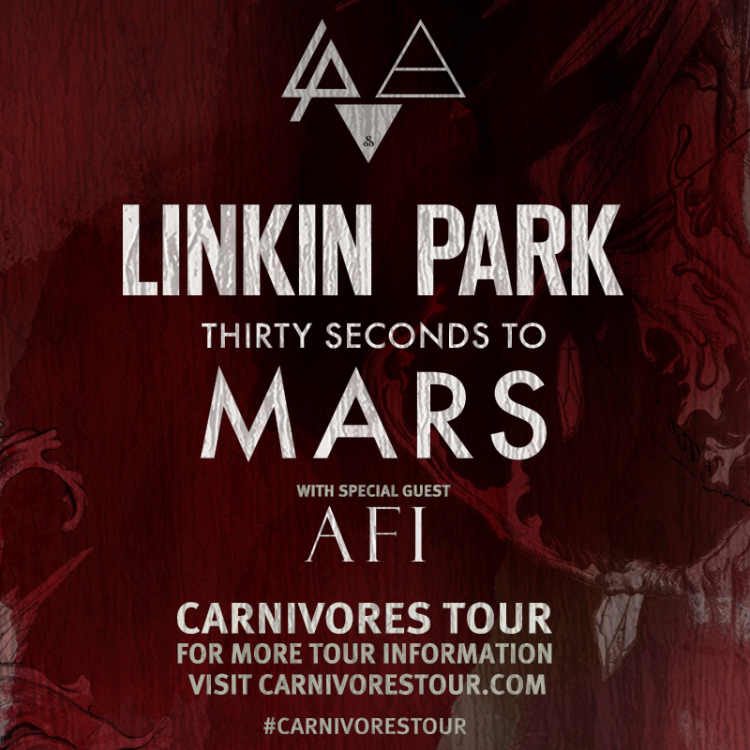