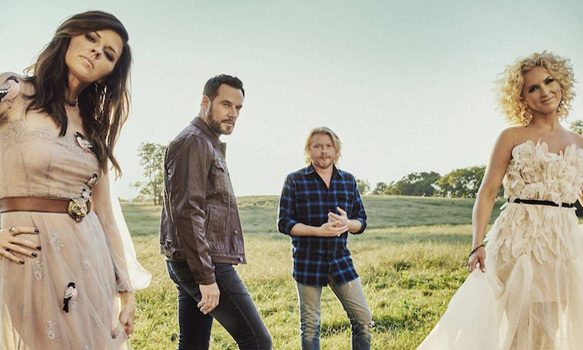 Their crossover sensation “Girl Crush” moved Little Big Town from being a group who were well-known largely only in the Country music community to something much more. Whether they truly stopped to listen and understand the lyrics or not, people took notice of Little Big Town’s four-part vocal harmonies and catchy Pop-tinged tracks. The wise are best to continue paying attention, as Friday, February 24, 2017, Little Big Town will release their eighth and newest opus, The Breaker, via Capitol Nashville.

Little Big Town’s musical foundations began in 1997 when two Georgia natives met whilst attending college in Alabama. Karen Fairchild and Kimberly Roads-Schlapman had discovered vocal bliss. A year later, the pair would reunite in Nashville, Tennessee, now with the addition of Fairchild’s husband, Jimi Westbrook. Shortly thereafter, the trio became a quartet with the addition of Phillip Sweet (Both men contribute vocals, as well as rhythm guitar work). They released their self-titled debut in 2002.

After a series of record label changes, the group settled at Clint Black’s Equity Music Group. Their sophomore disc, The Road to Here, was released in 2005 and gained Platinum certification with the RIAA. Finally on a roll, the group released their third album, A Place to Land, in 2007. Unfortunately, shortly after, the group would be forced to migrate labels yet again, this time to Capitol Nashville. For their part, Capitol Nashville would re-release A Place To Land in 2008. Four additional albums followed from the group; 2010’s The Reason Why, 2012’s Tornado, 2014’s Pain Killer, and 2016’s Wanderlust.

To date, Little Big Town has released some 24 singles, including the No. 1 Country singles “Pontoon” and “Girl Crush.” A massive crossover success, “Girl Crush” would also hit No. 1 on the Billboard Hot 100 chart. Throughout their fifteen year-long career, Little Big Town have won seven Academy of Country Music Awards (ACM); one American Country Award (ACA); one American Country Countdown Award (ACC); eight Country Music Association Awards (CMA); one CMT Music Award; one Daytime Emmy Award; two Grammy Awards; one People’s Choice Award; and there is a rumor that they also have partridges in their pear trees at home. Their nominations are countless. When, in October 2014, the group were invited to join the Grand Ole Opry by her majesty Reba McEntire, there was never a moment’s hesitation: they were inducted by Vince Gill two weeks later.

Beloved in the Country music community, they are just starting to eke into the mainstream as they approach the release of The Breaker. Full of their characteristic layered harmonies, The Breaker is sure to excite their dedicated fans and lure some new faces into the fold, as well. Its twelve tracks encompass a package that is multi-layered, well-produced, and wonderfully-crafted.

“Happy People” kicks off the album with a touching narrative about the joys of being a good person, set to a catchy soundtrack that sounds like a sunshine-filled California day beside the ocean. Fairchild takes over lead duties on the song that ends with the sentimental line “Life is short and love is rare, and we all deserve to be happy while we’re here.” It is characteristic Little Big Town: purely positive and enjoyable.

In fact, much of The Breaker is similar: from the Pop-friendly “Night On Our Side” (“Who says you gotta stay in this galaxy? Let’s start a revolution.”) to falling in love in the summertime in “Lost In California.” In “Free,” Fairchild and co. emphasize how the very best things in life are indeed free. You really must note that in a world of auto-tunesters, Little Big Town are a rarity; these cats can actually sing. This is a foursome who will, if a revolution ends all technology, not lose a night of sleep over their abilities to craft a truly sonorous song.

Those looking for the party atmosphere of tracks like “Day Drinking” or “Pontoon,” “Drivin’ Around” is the closest they are going to get on this disc. A song about cruising aimlessly with your best friends at sunset, this actually walks the borderline of Rock-n–Roll for this Country crooning quartet. They follow this up with “We Went To The Beach,” with Sweet on lead vocals paying homage to drinking PBR, tiki bars, Polaroids, and all the nostalgia of summers on the shore. Lyrically, it is nothing profound, but Little Big Town’s deliciously-layered vocals take this song from Colbie Caillet-forgettable to something else.

Written by the Country-turned-Pop multimillionaire Taylor Swift, “Better Man” is the lead-off single for the album, as well as a stand-out. “I just miss you and I wish you were a better man,” croons a heartfelt Fairchild on a track about being in love with a man who still has much growing to do. As a single, “Better Man” sold a reported 6,000 copies on its first day alone, and skyrocketed to No. 1 on the U.S. Hot Country Songs chart. It is a sincere testament to Swift’s songwriting abilities and the talents of Little Big Town.

All this said, The Breaker contains several beautifully-crafted homages to relationships gone astray, including the break-up anthem for 2017, “When Someone Stops Loving You.” Westbrook handles lead on this track, and those whose hearts are aching, absolutely must play it on repeat. “When someone stops loving you it don’t make the evening news, it don’t keep the sun from rising . . . even when you want it to,” the group relate in this perfect tribute to how breaking up might not be the end of the world, though it can sure feel like it. It is an honest foray into the world of the lovelorn, and certain to be a huge single for the group.

On the album’s final track and namesake, “The Breaker,” Little Big Town dare to place a spin on the break-up song; this is the heart-wrenching ordeal through the eyes of the heartbreaker. “I shot the stars out of your sky, took the love right from your eyes. I did it all knowing you thought I was the hero of your heart, but I turned out to be the breaker,” confess this viciously talented foursome on this wholly honest song.

Little Big Town shines like gold on The Breaker, their eighth studio effort. From start to finish, this is a collection chock full of addictive melody, relatable lyrics, and upbeat, positive attitude. Categorize them however one likes, but do not miss out on this group.  In addition, Little Big Town will be the first act in history to have a residency at the famed Ryman Auditorium in Nashville, beginning on the date of The Breaker’s release, February 24, 2017. What a way to celebrate an album, huh? For all of the above outlined points and so very much more, CrypticRock gives Little Big Town’s The Breaker 5 of 5 stars. 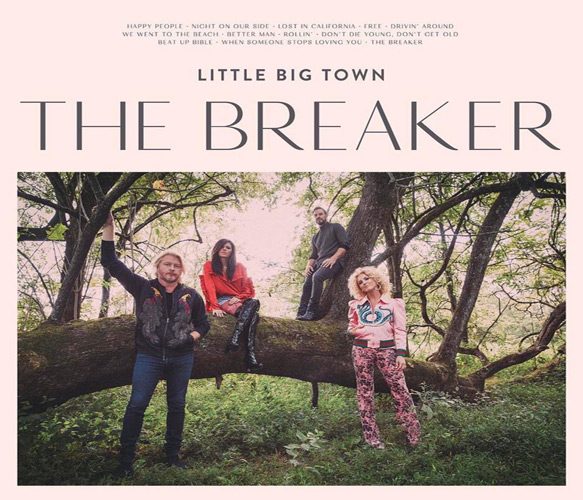