Living Among Us (Movie Review)

Vampires are just like you and me, only they practice an altered diet kind of like vegans, and they are absolutely Living Among Us. This brand new fang-bang flick will be released to select U.S. theaters on Friday, February 2, 2018, thanks to Vision Films and Red Compass Media. 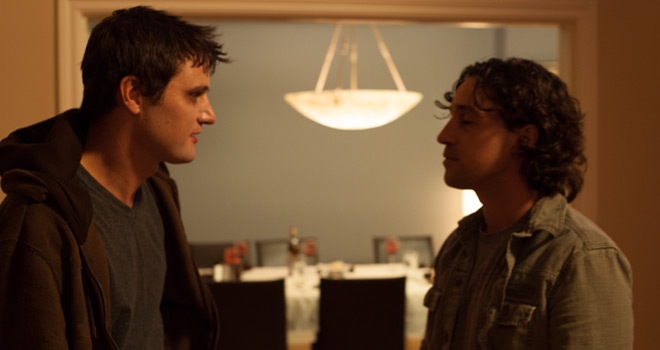 With vampires out-of-the-closet, so to speak, everyday citizens such as you and myself are abounding with questions for these friendly, neighborhood bloodsuckers. Quick to the task is the documentary news crew from KMNBR-7, the head of which broke the headline-gracing tale of blood donation centers working in cahoots with the vamps.

That journalist/documentarian, Mike (Thomas Ian Nicholas: American Pie 1999, Party of Five series), is now the big cheese in charge of a news crew selected to interview the vampire(s). Along for this plasmatic ride will be Mike’s right-hand-woman Carrie (Jordan Hinson: Eureka series, Breaking & Exiting 2017) as well as the station manager’s brother-in-law Benny (Hunter Gomez: National Treasure 2004, Walt Before Mickey 2015), a young cameraman who wants to document every moment of every day.

Inside, they are soon introduced to the head of the household, Andrew (John Heard: Big 1988, Home Alone 1990), a welcoming gentleman who is a venture capitalist by day, or, well, night. Soon after this introduction, the team are also introduced to the house’s final two inhabitants: camera-hungry Blake (Andrew Keegan: Independence Day 1996, 10 Things I Hate About You 1999) and the quiet one, Selvin (Chad Todhunter: Never Been Kissed 1999, Captain America: The Winter Soldier 2014). 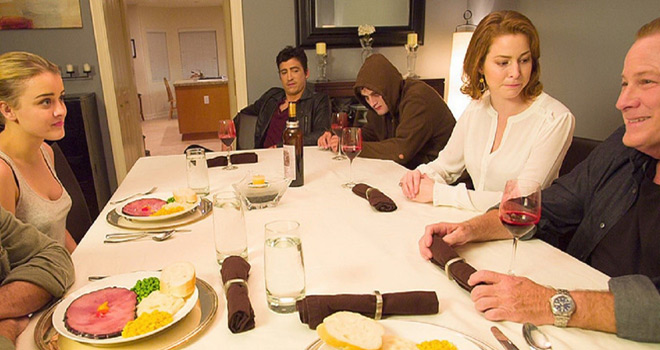 Mike and co. quickly learn that these vampires are perfectly visible in mirrors, though they suffer from cutaneous porphyria, a condition that causes them to be forced away from sunlight. In fact, Andrew quickly explains to the cameras that all of the myths about vampirism can be easily explained by modern science, making his condition nothing more than an inherited plasma-deficiency. Of course, as the crew begin to interact with the members of the household and accrue footage, we quickly realize that there might just be a little more going on here than plasma-sipping and religious fears.

Clocking in at 88 minutes in-length, Living Among Us was written and directed by Brian A. Metcalf (Sorrows Lost short 2005, The Lost Tree 2016), and is billed as a blend of Horror, Fantasy, and Sci-Fi. In truth, there is little Science Fiction here, rather, this is a piercing blend of Horror and Comedy done in the Found Footage/Faux-documentary style. The end result is a film with plenty of chuckles and a good wit about it, intentionally ludicrous in the very best of ways. It also stars James Russo (Donnie Brasco 1997, Django Unchained 2012)as KMNBR station executive Aaron; William Sadler (The Shawshank Redemption 1994, The Mist 2007) as the vampire Sectional Leader Samuel; Jessica Morris (One Life to Live series, Perception series) as Sybil; Amanda Rau (Nowhere Girl 2014, My Crazy Ex series) as Rebecca; Anna Sophia Berglund (Space Station 76 2014, The Lost Tree 2016) as the beautiful sacrifice; and even features a guest spot from Director Metcalf as Paul the news anchor.

For the film trivia geek, there are plenty of intriguing and glittering vamptastic connections buried within the cast and crew of Living Among Us; think Six Degrees of Edward Cullen. Take, for instance, head vampiress Elleanor, who is depicted on-screen by Esmé Bianco. Esmé, of course, being the name of Edward’s mother-figure in the Twilight series. Further Twilight connections can also be found: Carrie is played by Jordan Hinson, who recently acted in the film Breaking & Exiting, which was, coincidentally, directed by Pete Facinelli, he who depicted Robert Pattinson’s hot daddy, Dr. Carlisle Cullen, in the Twilight series. But enough about Team Edward for now! 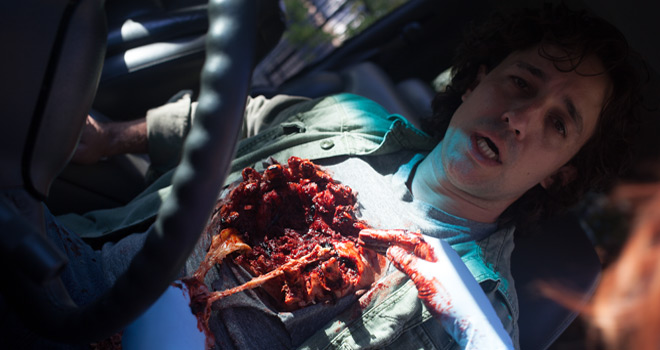 The ensemble cast of Living Among Us do a wonderful job in each of their myriad of roles, with the hands-down highlight here being Andrew Keegan in the role of the ridiculously campy Blake. He tears off arms, fixes his hair for the cameras, and is always on-point with his comedic delivery. Thomas Ian Nicholas, who is no stranger to a Metcalf production, does a solid job in his role as Mike, the young documentarian. In fact, this role feels somewhat organic to the actor, and he delivers a solid performance as the risk-taking journalist. Though we rarely see his actual face, Hunter Gomez as Benny is also solid in his role, even if he’s basically a disembodied voice throughout. Both Heard and Sadler, accomplished and noteworthy acting talents, are stellar in their vampiric roles, with the equally talented Russo also being stellar in his authoritarian role, as well. (Sadly, the world lost Mr. Heard on July 21, 2017, and the entire production is thus dedicated to his loving memory.)

Living Among Us blends together elements of many well-known vampire flicks, films such as 1985/2011’s Fright Night, 1994’s Interview with the Vampire, and, of course, 2008’s Twilight. In addition, there is a comedic sense that has been present in this film’s current contemporaries, films such as 2017’s Eat Locals. What all of this amounts to is a fang-bang with humor peppered throughout its often intentionally ludicrous script. The special FX and special FX makeup seem intentionally ridiculous and the blood looks like Kool Aid, but that is okay: it just adds to the merry mayhem.

While Living Among Us does have moments that drag and it is certainly not going to make you burn your copies of 1987’s The Lost Boys, it is a solid vampiric offering that adds a little bit of happy into the start of 2018. For these reasons, CrypticRock give Living Among Us 3.5 of 5 stars. 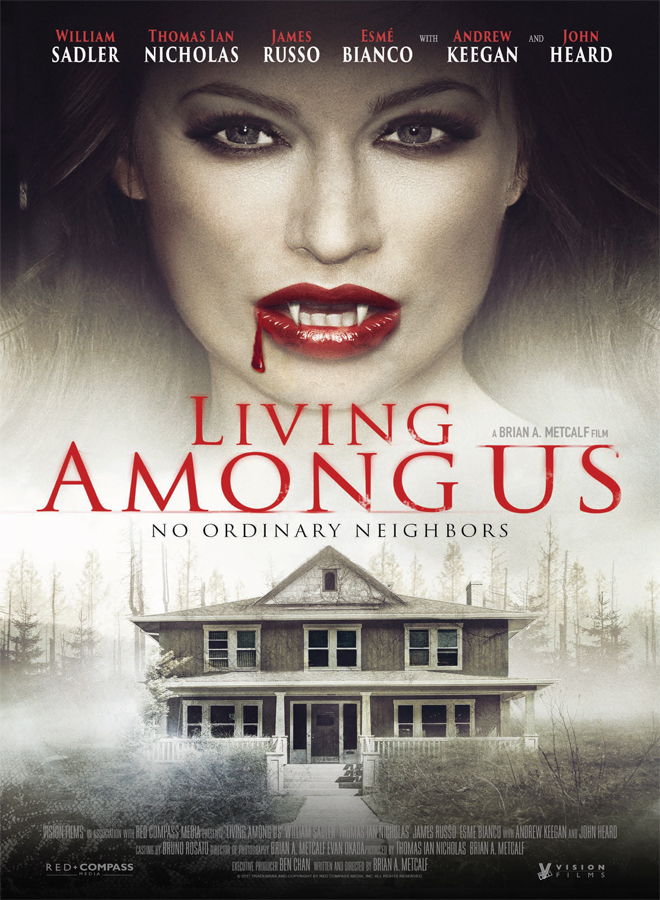 Purchase Living Among Us: