The Lost Boys Sinks Its Fangs Into 30 Years

“One thing about living in Santa Carla, I never could stomach: all the damn vampires,” was the quip that capped off what would become a sensational cult favorite. Released to theaters on Friday, July 31, 1987, The Lost Boys blended iconic Horror with gentle Comedy, creating something superbly palatable that would easily become a trademark of 1980s Pop culture. 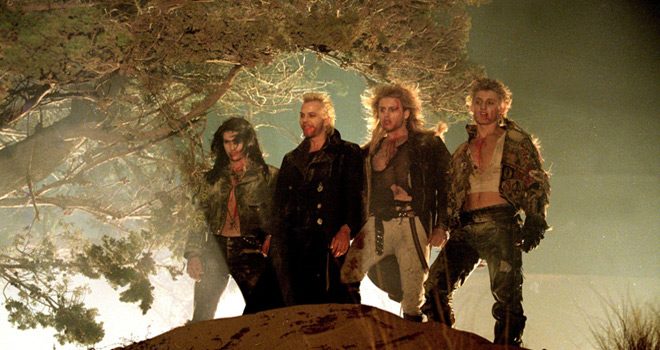 The Lost Boys opened at No. 2 in its first weekend at the box office thirty years ago, with The Witches of Eastwick (starring the likes of Jack Nicholson, Susan Sarandon, Cher, and Michelle Pfeiffer) in the No. 1 slot. Impressive considering The Lost Boys was a film with a largely unknown cast! The story itself revolves around the Emerson brothers – Michael (Jason Patric: Speed 2: Cruise Control 1997, Narc 2002) and his younger sibling Sam (Corey Haim: License To Drive 1988, Watchers 1988) – who, when their parents divorce, are forced to move to the small coastal town of Santa Carla, California, where life is anything but a beach.

Recently divorced mom Lucy (Dianne Wiest: Footloose 1984, Edward Scissorhands 1990) moves the family in with her father (Barnard Hughes: Tron 1982, Blossom series), all while simply trying to recover from her divorce, keep tabs on her teenage sons, and perhaps date a few of the town’s most eligible bachelors – namely Max (Edward Herrmann: Gilmore Girls series, The Wolf of Wall Street 2013). For his part in all of this, Grandpa (Hughes) is a quirky old man who is finely-attuned to the serious secrets lurking in Santa Carla’s blood and he pulls no punches in his vocal deliveries. Consider him the comedic relief!

As the family begin to explore California in their own unique ways, Sam’s suspicious nature and love of comic books leads him to develop a friendship with the paranoid Frog Brothers – Edgar (Corey Feldman: The Goonies 1986, Stand By Me 1986) and Alan (Jamison Newlander: The Blob 1988, Lost Boys: The Thirst 2010). Michael, instead, becomes enamored with a beautiful girl named Star (Jami Gertz: Twister 1996, The Neighbors series) which leads to a rendezvous with the town’s local misfit population, a gang of brooding young men including Marko (Alex Winter: Death Wish 3 1985, Bill & Ted’s Excellent Adventure 1989), Dwayne (Billy Wirth: Body Snatchers 1993,Chicago P.D. series), Paul (Brooke McCarter: Thrashin’ 1986, Wired 1989), as well as Laddie (Chance Michael Corbitt: Pumpkinhead 1988, The Rocketeer 1991) which are all led by the ominous David (Kiefer Sutherland: Flatliners 1990, 24 series). As Michael becomes inextricably intertwined with David’s group, Sam’s suspicions about his brother’s new frenemies grows and the rest, friends, is one bloody good vampire flick. 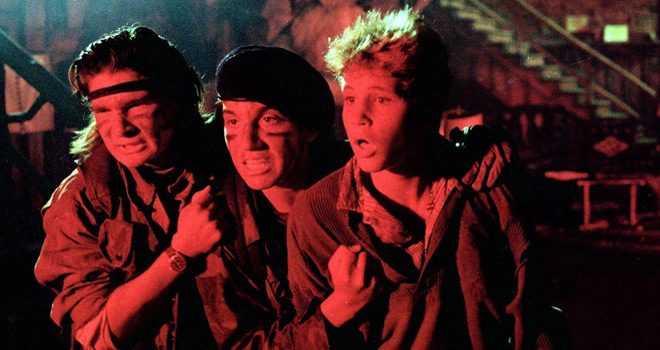 Directed by Joel Schumacher (Batman Forever 1995, The Number 23 2007) with a screenplay written by Jan Fisch, James Jeremias, and Jeffrey Boam, the title of the film comes from the parallel between David’s gang of young vampires and J.M. Barrie’s iconic Peter Pan character. In fact, The Lost Boys took the traditional vampire ethos and tipped it on its head, creating young, sexy villains who blended into a California beach town flawlessly. Despite boys being boys – and some never growing up! – this new spin on the vampire mystique made the classic villain somehow more approachable and would go on to inspire a future generation of young blood-suckers. (Buffy the Vampire Slayer, anyone?)

As with any truly great film, The Lost Boys presented a now iconic soundtrack, particularly its main offering, the Gothic Rock “Cry Little Sister.” Originally written by Gerard McMahon and Michael Mainieri and performed by McMahon for the film’s soundtrack, the track has gone on to be covered by everyone from Carfax Abbey and Blutengel to Aiden, L.A. Guns, and Tangerine Dream. Eminem even sampled the track on “You’re Never Over,” off 2010’s Recovery.

Although, perhaps the most successful rendition of the film’s lead song came in 2009 when Alternative Metal band Seasons After scored a top 20 Rock hit with it as their second single off their 2008 debut album Through Tomorrow. Whatever it may be, “Cry Little Sister” has become iconic with even McMahon himself performing it at Horror conventions through the years. The Lost Boys has served as inspiration for many bands throughout the musical world, notably Finland’s Gothic Rockers The 69 Eyes – who recorded a tribute song in 2004 titled “Lost Boys” – as well as the Horror Metalers Motionless In White, whose ode to the film is appropriately entitled “We Only Come Out At Night.”

Rumors throughout the late ‘80s and early ‘90s abounded that Schumacher was reprising The Lost Boys, perhaps creating a sequel entitled The Lost Girls. As the years chugged away, Schumacher moved on and nothing came of the rumors until two straight-to-video sequels materialized: 2008’s Lost Boys: The Tribe as well as 2010’s Lost Boys: The Thirst. While both films contained cameos from Feldman as Edgar Frog, neither were able to maintain the success or cult-following that built itself around the (far superior) original film. All hope for a reunion of the original cast – or any semblance thereof – was sadly lost in March 2010, however, when Haim tragically passed away at the young age of 38. Additionally, The Lost Boys family sadly said farewell to Hermann in 2014 and McCarter in 2015. 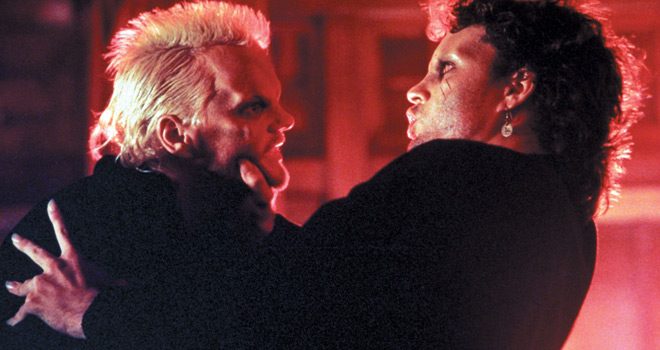 With the love for all things fanged and deadly always running high in the Horror community, The Lost Boys is a film that stands the test of time for its kitschy, fun take on the villainous creatures of legend. From the hysterical lines of Hughes as Grandpa to the darkly ominous body language of Sutherland as David, The Lost Boys eked true blood from every pore of its ensemble cast. There was a certain magic captured in the film that was destined to never be repeated, though – thankfully for all fans – the evidence remains proof positive in their DVD/Blu-ray collections. Here is to thirty amazing years of being creatures of the night! 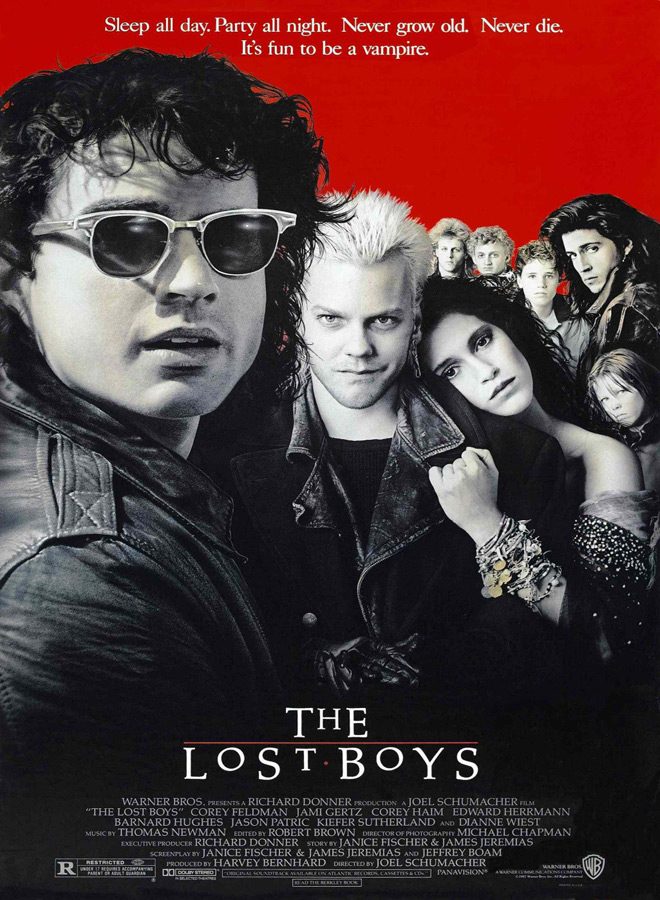