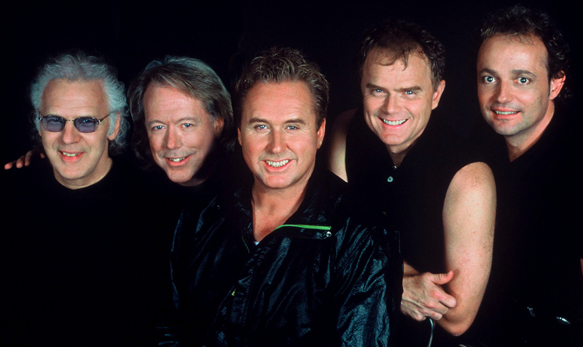 During their heyday in the early to mid-1980s, Loverboy might have seemed to be just another group of guys in leather pants cranking out simple guitar riffs with lots of layers of keyboards over Disco-Rock beats, starring in a ton of early MTV videos filled with hot chicks, big hair adorned with headbands, and epic stage performances.

Loverboy has never completely disappeared from listeners musical memory, nor our cultural thoughts about that wonderful era from 1980 to approximately 1987. There was something truly and totally ‘80s about them. They not only rocked the tight leather pants, they made tight RED leather pants forever associated with them. They sang primarily and devotedly about sex and non-stop partying in a fun way that made you want to hang out with them. They toured with some of the greats of arena Rock at the height of the era – Cheap Trick, ZZ Top, Kansas, Def Leppard, and Journey. Though this Canadian band’s 1980 self-titled debut, with help in part by legendary Rock engineer Bob Rock, put them on the map, it was 1981’s “Get Lucky” that brought the world not only the red leather-clad butt on the cover, but also “Working for the Weekend,” arguably Loverboy’s most famous song.

Hits like “Turn Me Loose,” “Hot Girls In Love,” “Lovin’ Every Minute of It,” and even “Almost Paradise,” singer Mike Reno’s duet with Ann Wilson for the movie “Footloose,” still get radio play today. “Working for the Weekend” has transcended simple airplay to become iconic of the era, having been used in countless movies, television shows, commercials, and video games over the years. Taco Bell and Radioshack have also recently used Loverboy’s image and music in ‘80s-themed high-profile advertisements.

Though fun might always be poked at Loverboy for proudly representing almost every cliché associated with the 1980s, the band has proven once again that their tongue-n-cheek, oversexed, partying, masculine stance – with some actually very thoughtful turns – still works and makes for some great music on their latest album, Unfinished Business. This collection of songs, some new and some written as many as forty years ago, was released in July of 2014 as their first new album of all-original studio recordings in seven years. Singer Mike Reno, Guitarist Paul Dean, Drummer Matt Frenette, Bassist Ken Sinnaeve, and Keyboardist Doug Johnson recorded the newest tracks in a friend’s home studio in Raleigh, N.C. They are currently touring on the “Working For Your Weekend” tour with Rick Springfield and The Romantics and have these new tunes to offer up between the mega-hits.

“Fire Me Up” opens the album and has everything a Loverboy fan could want – a simple, mid-tempo Rock guitar riff joined by those signature Loverboy keyboards, with Reno’s incredible Rock voice still intact right off the bat. The first lyrics, sang aggressively by the entire group, also do not skip any sort of beat from 1982: “I wanna touch you, I know you want to, I wanna rock you.” The chorus also stays true to the theme: “Like fuel for the fire, you fire me up … Give me one last chance at your heart.” Complete with a driving Rock-4 beat and a shredder guitar solo, this fun headbanger is unmistakably Loverboy.

“Counting the Nights” is another driving rocker about an overdue breakup, but has an almost ballad feel in delivery, kicking off with the dreamy keyboards and joined by an atmospheric guitar riff/solo from Dean, as if Joe Satriani were playing with Styx for a bit here; which is a good thing. “Ain’t Such a Bad Thing” is slow and steady with a modern Rock anthem element. The lyrics are inspiring in a song about taking chances on love and having someone see you for all you are: “Let the cat out, chase my shadow, burn my bridges, see the world… ‘Cause you bring out the best in me, and that ain’t such a bad thing… and you bring out the worst in me, and that ain’t such a bad thing.” Guitarist Paul Dean wrote the next track, “Come Undone,” forty years ago, back before he had met singer Mike Reno. It is a classic Loverboy Rock ballad about spending some much-needed time away from the girlfriend, structured around Dean’s heartfelt guitar intro. Reno’s voice harmonizes nicely here, and a moving guitar riff adds interest throughout the verses. The key change on the guitar solo brings to mind Loverboy’s “Heaven in Your Eyes.”

The anti-authority anthem, “Slave,” is surprising in that it starts out with a bluesy keyboard riff then resolves into a double-kick bass drum-driving rocker, with a ‘70s keyboard riff featured throughout and a surf guitar hanging out in the background. The guitar solo is straight out of 1989, technical shredding and bluesy at once. Reno punctuates his fun on this one with prolonged laughter on the end of the song. “What Makes You So Special” is a return to the down and dirty ‘80s rocker ala .38 Special’s “Hold on Loosely,” a song about falling in love at the bar: “What makes you so special? What makes you so right? What makes you so special? I’m gonna find out, ‘cause tonight’s the night.” This song features a killer intro guitar riff and playful keyboards thrown in just to make sure we are still listening to Loverboy.

“War Bride,” written in 1979, is probably the strongest, most interesting tune on the album due to its throwback appeal and intricate song structure. It starts with keyboards and a taste of Wagner’s “Bridal Chorus,” then falls into a piano solo and a military-style drum beat, at which point Reno begins singing the tale of a man married to a woman in the military: “Stuck at home with the family, lonely anniversary… She’s my war bride, ‘till the end of my life, such a wonderful wife.” This is a Rock epic one would expect to hear from Iron Maiden, not the fun loving guys in Loverboy. It is still catchy in its heavier subject matter, similar to Foreigner’s “Star Rider” or Night Ranger’s “Sister Christian.”

Paul Dean offers up another oldie but goodie with “Doin’ It the Hard Way,” a Chuck Berry-influenced tune he wrote during his brief stint playing with Bachman Turner Overdrive. This one is a great late ‘70s Rock twist on a very 1950s groove about working too hard (and probably for the weekend, but luckily they saved that one for later). The ‘50s influence is accented with nice slide guitar solos, and Reno’s voice and harmonies sound particularly good here. “You Play the Star,” also written in 1979, starts with classical Bach-style keyboards and is reminiscent of “Turn Me Loose” with its slower tempo and keyboard layers – or even Europe’s “The Final Countdown” in its easygoing epicness. “Crack of the Whip” once again offers up those signature keyboards over a no-frills Rock-4 drum and Disco Rock bass beat. The closer to this latest collection of Loverboy songs is an appropriately dreamy tune about kinky sex and control with lots of layers of keys and a laid back guitar solo that fades out at the end.

Mike Reno has said that the recordings Loverboy produces now function more as promotional tools for their live shows, which are the band’s bread and butter these days. Either way, Loverboy has stayed true to themselves throughout Unfinished Business, and there is a lot to enjoy for fans and non-fans alike – more so if everyone tries squeezing into those tight red leather pants. CrypticRock gives Unfinished Business 4 out of 5 stars.