The 1980s gave birth to a long list of Pop legends, and on June 30th of 1986, Madonna released her third studio album, True Blue. Already a star in her own right, True Blue was released at a time when Madonna was poised on the cusp of mega-stardom; in fact, before long, she would become known as the “Queen of Pop.” An immediate success across the globe, True Blue reached number one in 28 countries – including, of course, the United States – and it spent 34 consecutive weeks at the top of the European Top 100 Albums chart, longer than any other album in history.

True Blue would go on to be the world’s top-selling album of 1986, as well as the best-selling album of the 1980s by a female artist. With estimated sales of over 25 million copies worldwide, True Blue remains one of the best-selling albums of all time; and all five singles released from the album reached the Top Five on the Billboard Hot 100 Chart. If this was not enough, “Live to Tell,” “Papa Don’t Preach,” and “Open Your Heart” all went on to hit No. 1 on the Billboard charts.

Madonna – born Madonna Louise Ciccone – co-wrote and co-produced the entirety of the album along with Stephen Bray – who had worked on her previous album, Like a Virgin– and Patrick Leonard. Inspired by her relationship with then-husband, Actor Sean Penn – to whom the album is dedicated – the album spoke of relationships, secrets, lies, bad boys, escaping to a beautiful island paradise, dance parties, and the pains of youth. This was one of Madonna’s most personal albums to date, and would become the hallmark for all future works by this self-proclaimed “Material Girl.” True Blue was not just a bubbly hit song about young love, it was an album about a woman coming into her own, musically.

“Live To Tell” was the first single/video off True Blue, released March 26, 1986, in advance of the album. A more emotionally profound ballad – dealing with deceit, mistrust, and the scars they leave upon a relationship – Madonna wrote the lyrics herself and allowed the song to be included on the soundtrack of husband Penn’s At Close Range (1986). The minimalist video featured a somewhat ‘kinder, gentler’ Madonna in subtle makeup and conservative dress – seated in a plain wooden chair on a black background – allowing the song, and not the fashion, to speak for itself. Interspersed with clips of Christopher Walken and Penn from the film, Madonna’s performance was somber and poised. Ultimately, some critics would later refer to the song as the best ballad of her career. “Live To Tell” was Madonna’s third No. 1 single on the Billboard Hot 100; her first No. 1 on the Adult Contemporary chart; her second No. 1 song featured in a film; and the single would reach international Top Ten charts across the globe.

Of course, Madonna was not about to tread lightly into her future. She returned to the charts with her second single/video for the album, “Papa Don’t Preach,” a controversial song about teenage pregnancy. Telling the story of a young couple, deeply in love, who discover that they are faced with an unplanned pregnancy, “Papa Don’t Preach” was a plea to the narrator’s father, a ground-breaking and truly shocking track for 1986 America. Roe v. Wade was not yet fifteen years-old, teen pregnancy was nowhere near as accepted as it is today, and Murphy Brown had yet to be an unwed TV mother. While today the words “I’m keeping my baby” might be seen as a positive influence upon our youth, in 1986, the Church and much of the record-buying public were flabbergasted. That did not, of course, affect sales: Madonna would beat out Wham! to take the number one spot on Billboard and “Papa Don’t Preach” would become her fourth number one single in the U.S. Clearly, nothing sells records quite like controversy.

Riding high on radio and MTV success, Madonna decided to throw her fans a curveball: create a video for third single, “True Blue,” a Dance-Pop song that harkened back to the 1950s, the decade of the Sock Hop. In conjunction with MTV, her “Make My Video” contest winners, Angel Garcia and Cliff Guest, created a video with a perfectly retro feel to fit the song – poodle-skirts, bobby sox, ponytails, and all. It became her official video for the single in the U.S. Some would bill the song as fluffy and overdone, though, despite harsh reviews from critics, the song became another Top Ten hit and peaked at No. 3 on the Billboard Hot 100 chart in the United States. It would hit No. 1 in both Ireland and the UK.

Not one to pussyfoot around a good chance at shock value, our Madonna segued right into the Dance-Pop single “Open Your Heart,” where she played a peep show dancer who, at the great ire of his grandfather, befriends a young boy. Few children of the eighties will ever forget the image of Madonna, clad in a short-cropped black wig and her now infamous gold sequin-tipped bullet-bra/bustier. Ah, if a bra could talk. “Open Your Heart” was, believe it or not, originally intended for Cyndi Lauper. Would she have she-bopped herself in a bullet bustier, do you think? The fourth single from the album, “Open Your Heart,” was released in November 1986 and immediately became Madonna’s fifth number-one single on the Billboard Hot 100 chart. Internationally, it became a Top Ten hit throughout Europe.

“La Isla Bonita” was released as the fifth and final single in February 1987. Madonna’s first foray into a Spanish-themed track, the wonderfully upbeat, fun ode to escapism was a worldwide hit and reached No. 1 in Canada, France, Germany, and the UK, while peaking at No. 4 on the Billboard Hot 100 chart in the United States.

After the release of the album, Madonna and True Blue received generally positive reviews from worldwide media. Years later, the album would be billed as an archetype for the late 1980s/early 1990s Pop albums. Global success for the record brought accolades galore: from Madonna’s first entry in the “Guinness Book of World Records” – where she was billed as the “most successful singer of 1986;” to being named the top-selling album of 1986 and the biggest selling album of the 1980s by a woman. True Blue remains one of the best-selling albums of all time with sales of more than 25 million copies worldwide to date.

As if this was not enough for an artist’s junior studio release, at home in the United States, True Blue would debut at No. 29 on the Billboard 200, and reach No. 1 by mid-August. There it would stay for five consecutive weeks at No. 1, with a grand total of 82 weeks spent at various positions on the chart. Additionally, the album charted on the Top R&B/Hip-Hop Albums chart; was certified seven times platinum; and would go on to be one of Madonna’s top three selling albums of her career. These days, Madonna and True Blue have won so many awards, recognitions, and honors across the globe that to list them all would require far more space than this simple article has been allotted.

True Blue cemented Madonna’s position as the most popular female artist of the 1980s, on par with superstars like Michael Jackson, the King of Pop. Love her or hate her, the simple fact is that you know the name Madonna. It’s been an incredible 33 years since Madonna first struck radio gold with the single “Holiday,” a Top 10 hit off her self-titled debut, Madonna. Over three decades and nearly forty number ones later, the Queen of Pop – whose current estimated net worth is northwards of $550 million – continues to produce new music, tour, and wow her die-hard fandom across the globe. An international fashion and music icon; praised as an icon amongst the gay community and continuing to inspire strong-minded, independent women to this day; stunning at 58, Madonna shows no signs of stopping anytime in the near future. An impressive fete for an Italian-American girl from small town Michigan, who simply wanted to move to New York and become a star. 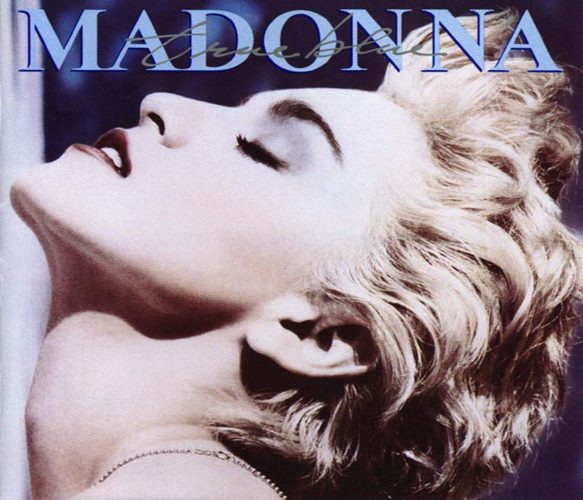