For some, a trip to the mall is a time to hang out with friends and do some window shopping. For others, it is a dead end, both literally and figuratively. Linkin Park’s Joe Hahn took a break from directing his band in their own videos to direct the feature length Mall, released October 17, 2014 through A Silver Lining Entertainment and Collective Digital Studios. The movie was produced by Vincent D’Onofrio (Full Metal Jacket 1987, Chained 2012) and Sam Maydew (SLC Punk 1998, The Education of Charlie Banks 2007) around an original novel written by Eric Bogosian (Talk Radio 1988, Under Siege 2: Dark Territories 1995). This is the second project between these two men since their Law & Order: Criminal Intent days, the first being D’Onofrio’s murder Musical Don’t Go In the Woods (2010). Also back from Don’t Go In the Woods to help D’Onofrio pen the script were Sam Bisbee and Joe Vinciguerra, with Erica Hampson acting as producer. Hahn’s bandmates from Linkin Park got together with Deadsy drummer Alec Puro (Wicked Tuna TV series, The Fosters TV series) to compose the soundtrack and Matt Primm (The Lazarus Effect 2015, Incarnate 2015) took care of the surreal, hallucinogenic special effects. Mall stars a few familiar faces, including D’Onofrio himself, Gina Gershon (Showgirls 1995, Bound 1996), Peter Stormare (Fargo 1996, The Lost World: Jurassic Park 1997), Cameron Monagan (Shameless TV series, The Giver 2014) and relative newcomer James Frecheville (The First Time 2012, The Drop 2014). Kimberly Kane and Juelz Ventura appear in cameos as porn actresses.

Filmed in Eagle Rock in Los Angeles, Mall is about Jeff (Monaghan), a philosophical college student who goes to the retail complex not to spend money, but to contemplate the shoppers and theorize about their existential existences. As he walks from one side of the massive structure to the other, he makes up unnervingly accurate home lives for the people around him and quotes Hermann Hesse’s Steppenwolf and Orwell’s Animal Farm to the beautiful but airheaded Adelle (India Menuez). The sex starved businessman Danny (D’Onofrio), the lonely housewife Donna (Gershon), and the money hungry tuxedo salesman Barry (Stormare) are all focuses of his observations.

While Jeff is wandering the mall, meth-addict Mal (Frecheville) has gotten himself a car loaded with full gas cans, automatic rifles, and plenty of ammo. He also has a vendetta – take out his parents and then go out in a blaze of glory, either by suicide or by cop. Where is the best place to get the most attention and biggest body count? Why, the mall, of course. As the complex closes for the evening, Jeff and his friend Beckett (Reid Ewing) drop Ecstasy with an acid base and it hits Jeff hard. Are the gunshots and dead bodies he is seeing real or just a part of his altered brain chemistry? Or, is the whole string of events even happening at all?

This multi-layered, debut feature film from Linkin Park’s turntablist is a thought-provoking film on our disaffected society’s reaction to violence. While the viewer never finds out if the action in the film is real or only takes place in Jeff’s mind, as it is up to the viewer’s interpretation, the result is the same. He encounters the people he had analyzed earlier in the film as the night of violence breaks out around him, and they all react with a jaded sense of indifference and use the chaos of the shooting to their own advantages. The art world reaction has been a positive one- inspired by the film, an exhibit titled Beast Astray was shown on September 25, 2014 in Los Angeles at Known Gallery. In lieu of a theatre release, the movie was offered On Demand, on DVD/Blu-ray, and is now available via Netflix. With the hypnotic, psychedelic special effects doing an outstanding job showing Jeff’s surreal state of mind throughout, combined with an sensual soundtrack by the boys from Linkin Park, Mall is a boat-rocking look at the almost commonplace crime of mass shootings, seen through the eyes of a deep, but off-kilter, college student. Definitely one to watch multiple times, CrypticRock gives Mall a 4 out of 5 stars. 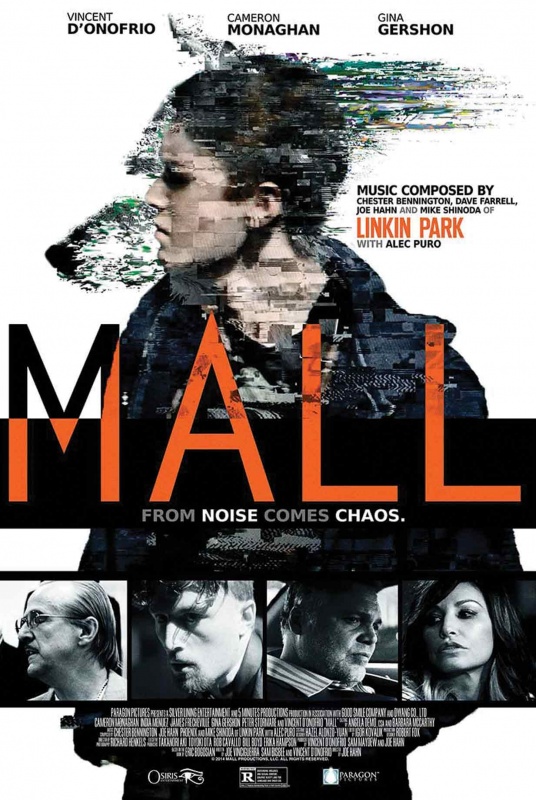