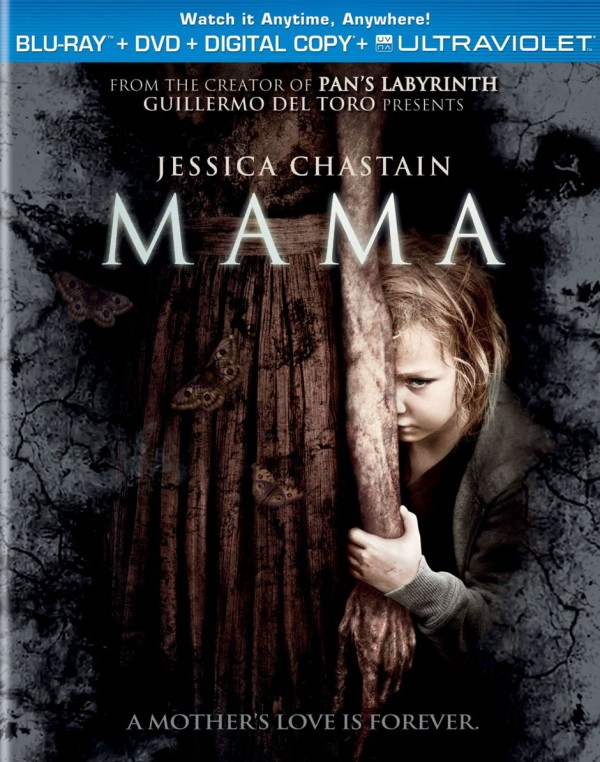 Sitting down to watch Mama (originally released in the US in January 2013, and now available on Blu-Ray) one’s expectations are raised by two tantalizing tidbits. The first, this film is “Presented By Guillermo Del Torro” and the second is that it’s an original story, sort of.
Guillermo Del Torro, a Mexican film director, screenwriter, producer, and novelist brings a tremendous halo of credibility to any project he’s attached to, which, no doubt is why he’s “presenting” this particular piece. With a career that has brought us brilliant works like The Devil’s Backbone and Pan’s Labyrinth, as well as eye-popping blockbusters such as Blade II and Hellboy, fans of Mr. Del Torro have come to view his touch as a promise that they’ll be given a visually gorgeous, and imaginative ride, at the very least. The fact that Del Torro serves only as a Producer and “presenter” of this film is somewhat telling.

Mama tells the story of two young girls, abandoned in the woods. The girls are discovered years later, seemingly having turned feral, and are brought back into society, what they’ve brought back with them, and how their caregivers deal with that, serves as the plot for the film.

At it’s very least, Mama is an esthetically pleasing film. Director Andy Muschietti has clearly taken his cues from the Del Torro school of Dead Things when creating the film’s overall mood and settling on the monster design for Mama herself. Mama has all of the anorexic creepiness of the REC demon, The height and single-mindedness of Pan’s Pale Man, and the unsettling fetal alcohol syndrome esthetics of the vampires from 30 Days of Night. Put them all together, and you have a completely unwelcome house guest, and a creature that, if you’re lucky, will appear in your bathroom mirror some night and scare the bejesus out of you.

The good? The film is full of gauzy, sepia washes, and unnaturally bent and sped up human movements that settle right into the uncanny valley and make you shift in your seat. There’s creeping rot and insect eating (done tastefully, natch) and a reasonable explanation for all of the bumps in the night.

The bad? This is all extremely, almost distractingly, derivative. Mama’s greatest scare, to be generous, is an extremely overt homage to “Gin gwai” (The Eye) a superior Japanese film (later remade into an almost corrosively horrible American mish mash bearing the same title.) Throughout the rest of the film, the American remake of Ringu, as The Ring, weighs heavily. To be fair, these derivative moments, while distracting to horror junkies, may not play as heavy a role, or be as distracting to the average viewer, and might even lend flavor and magic to the film if they appeared to be original thoughts.

The weight of credulity for the film rests heavily on the shoulders of Megan Charpentier and Isabelle Nélisse, the film’s young stars, and the girls do a wonderful job of taking it on. They are sympathetic without being overly cute, believable actors, and have great chemistry with each other. If only the same could be said of the film’s more mature actors.

The adult leads are played by Jessica Chastain, better known for her Oscar winning role in Zero Dark Thirty, and Nikolaj Coster-Waldau, currently seen on Game of Thrones as Jamie Lannister. The chemistry between these two leads is absolutely non existent, and while it’s possible that there is some explanation for their continued pairing somewhere on a cutting room floor in Canada, it is not evident anywhere in the film as presented. Toward the end of the movie, there is a Ring-like hunt for a ghost’s secret that, due to this terrible chemistry, just seems bungled and confusing. For her part, Chastain does a wonderful job taking a character that is written as that most unpleasant creature a“childfree woman” and turning her into an actual human being with thoughts, feelings and goals. Coster-Waldau utterly fails in his role as the male lead, and serves only as a plot device, and a thin one at that. While conventionally handsome, he’s largely unlikeable, and, eventually, devolves into a completely unnecessary element.

Overall? I’m going to give this film an “eh” on a scale of blech to woah! It’s not HORRIBLE, but it’s not particularly worth watching either. I won’t say shame on you, Guillermo, but really, you could have done SO much better. Cryptic Rock give this movie 3 out of 5 stars.

Written by Florence Ivy
Check out her store

Strange Things For Strange People
Earn Reward Points With Every Purchase!
Use code FIRST10 and get 10% off your first order.