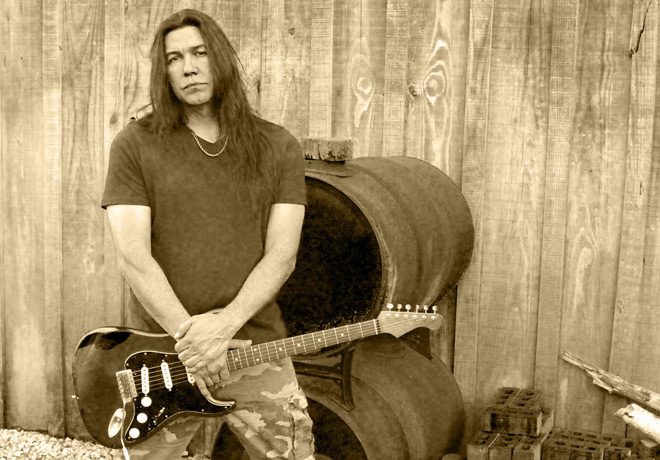 Charismatic Lead Vocalist and Guitarist Mark Slaughter sent listeners into flight with angels in the ’90s with the Rock band Slaughter. Now, over twenty years later, Mark Slaughter brings forth a progressive exhibition of his artistic talent and range, superiorly layered with various influences as well as innovative riffs on his new solo album, Halfway There.

The band themselves, Slaughter, sold more than five million records worldwide in the 1990s. Mark Slaughter and Dana Strum (bass) formed the band in 1988 after leaving the Vinnie Vincent Invasion and their 1990 debut album, Stick It to Ya, spawned several major hits including “Fly to the Angels,” “Up All Night,” “Spend My Life,” and “Mad About You.” Their second album, 1992’s The Wild Life, was certified gold, and over the next few years, the band released several more albums; 1995’s Fear No Evil, 1997’s Revolution, 1998’s Eternal Live, featuring final performances by their guitarist, Tim Kelly, who was tragically killed in an auto accident, before 1999’s Back to Reality.

Since then, Mark Slaughter has worked on dozens of other albums and projects for television, movies and sports. Then, in 2014, he began to embark on solo work and debuted the anthemic “Never Givin’ Up,” a tribute song to all who have served in the military. Next came the release of his first full-length solo album in 2015, Reflections In A Rear View Mirror. An impressive and robust effort, this was Mark’s first exploration as a solo artist. Ranging from the Pop sensibilities of “The Real Thing” to the fierce “Away I Go,” Mark confidently showcased his hidden talents while playing an assortment of instruments including guitar, bass, keyboard, mandolin, saxophone, and even Native American flute as heard in the instrumental “In Circle Flight.”

Now two years later, Halfway There, set for release on May 26th via David Ellefson of Megadeth on the EMP Label Group (Ellefson Music Productions) in the U.S., Europe, and in Japan with Universal Music sees Ellefson and Slaughter’s thirty year rapport transform them into music business colleagues. Produced and co-mixed by Mark Slaughter with John Cranfield (AFI, Andy Grammer), the label describes the album as a “return to form of the classic Slaughter sound, but with some modern upgrades.” In addition, the album art was created by Sam Shearon (Rob Zombie, Iron Maiden, Kiss, Clive Barker).

Ten tracks domestic, with an eleventh bonus track for the Japanese edition, Halfway There reveals a deeper, darker, and more reflective side of the Slaughter man who has masterfully expanded his role as singer, songwriter, producer, arranger, and multi-instrumentalist on the album. Here, Mark ventures further into his artistic genius, providing a thicker and more powerful sequence to his original sound and style. He takes full control of his varied talents and leaves no stone unturned as he extensively performs multiple roles on the recording.

Upon putting on Halfway There, one quickly recognizes the soaring vocals and ripping guitars, but a further listen reveals a darker, more complex state, not heard on any of Mark’s previous work. His lyrics seem much more reflective and personal, often embracing love, life, and ultimately, loss. Mark’s true love of music and varied Classic Rock influences are also apparent throughout. That said, as one of the most anticipated Rock releases, previews of the songs “Hey You” and “Conspiracy” have already received plenty of positive action and reactions.

The album’s opening track, the aforementioned “Hey You!” launches a power punch with colliding and coinciding guitars amid pronounced percussion from the double kick of the drum and choruses that make you want to sing along and raise your fist to the air. “All hands up, Rock n Roll forever…Hey You! Turn it up and sing it with the band” is a catchy Hard Rock chant.

The growling lyrics of “Blackness and blackness” quickly set the doom and gloom mood of “Devoted,” a heavier, faster, and angrier thrashing piece that seemingly pays homage to Megadeth and EMP’s Ellefson. The album kicks back a bit with “Supernatural,” the third track and an inviting melody clearly possessing Pop appeal. More relaxed and slightly funkier, the song lifts the listener and trickles with classic Slaughter stimulus.

Looming large into a big soundtrack sound is the album’s title-track, “Halfway There” where Mark manages to craft a cut of simple reflection (“going down the highway of life”) into a fight song. A powerful ballad with multiple vocal tracks and layers of instrumentation, it possibly provides a personal look into Mark’s life and his own mortality. Then, the guitars create a soundscape perfectly encompassing the vocal scope that is uniquely Mark Slaughter’s on “Forevermore,” the fifth track which is simply a love song. From here, the album turns heftier and grungier in both style and attitude with “Conspiracy” and “Reckless.” Interestingly enough, Mark has said that “Conspiracy” was built around a guitar riff that revealed itself off a distorted signal from his pickup.

Furthermore, flawless production on “Disposable” weaves children’s voices seamlessly with strands of the Beatles’ Strawberry Fields era, into Brian May guitar, concluding with Another Brick In The Wall styled chorus of “I’m not disposable. We’re not disposable.” This is before the album’s sequence of “Turn It,” a perfect alignment of Mark’s vocals chords with his power chords and the final cut, “Not Here,” a despondent song of pure loss.

Experimenting without alienating, Halfway There offers both Mark and Slaughter fans the strikingly familiar and the allurement of the unknown. Mark Slaughter’s Halfway There is a remarkable collection of songs spanning the gamut of his endless musical aptitude. To help celebrate its release, Mark will be hitting the road both as a solo artist and with Slaughter throughout 2017, so do not miss out on the album or tour. CrypticRock gives Halfway There 4.5 out of 5 stars. 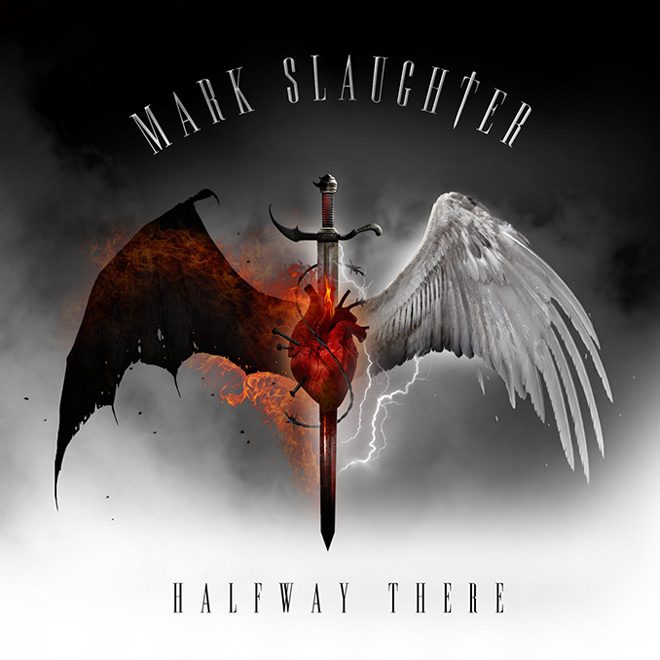