Masters of the Universe Has the Power 30 Years Later

If you were a kid in the eighties, chances are you were a fan of He-Man, most likely creating some role-playing scenarios in your bedroom with Masters of the Universe toys and watching the He-Man and the Masters of the Universe cartoon series. Extremely popular, when Mattel decided to capitalize on the success of their toy line and Filmation’s popular cartoon series with a live-action film, they probably did not expect the film to be infamous for its underwhelming box office performance, but the 1987 Science Fantasy Action cheese-fest was essentially a flop, raking in a little over $17 million of its approximate $22 million budget. 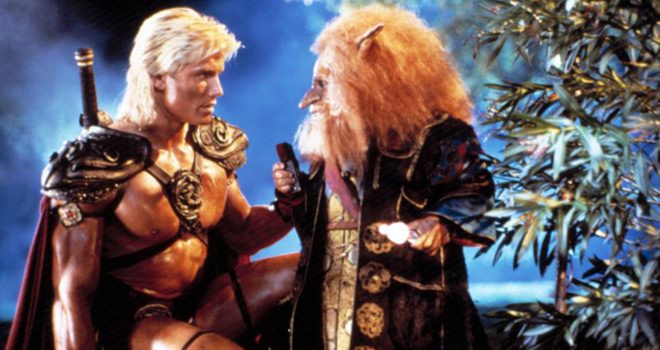 Released on Friday, August 7th of 1987, on its opening weekend it outranked others’ opening including the Comedies Back to the Beach and Madonna’s Who’s That Girl. Although, it was no match for the popular James Bond flick The Living Daylights and Stakeout, Masters of the Universe dropped from the charts rather fast. Its failure was a major contributing factor to the downfall of Cannon Films and marked the end of the “Masters of the Universe” franchise. Well, that is a lot for a corny but nevertheless fun ’80s film to harbor, but Gary Goddard’s Masters of the Universe seems to have aged better than it began, becoming a cult-classic.

Where did this film go wrong? There were a few factors, but Gary Goddard, also known for his work on short-lived 1987 Captain Power and the Soldiers of the Future, did the best he could with the limitations he was given. The film’s budget constraints seem to have been the main culprit, keeping it from being what was intended and setting the majority of the plot on Earth rather than the fictional planet of Eternia. It was a big letdown for fans who wanted to see the sorcery and swordplay that a full-on setting in Eternia would produce.

The bits and pieces that were included gave a taste of what could have been, making the film a bit of a disappointment for fans. The toy character, Orko, was also replaced by Gwildor due to the complexity of adapting the Orko character theatrically, a common occurrence when bringing a story to screen, along with dealing with a studio and its demands. Conceptually, Goddard seemed to have wanted to make this more of a comic book come to life, but the studio did not think they could market that to an adult audience. 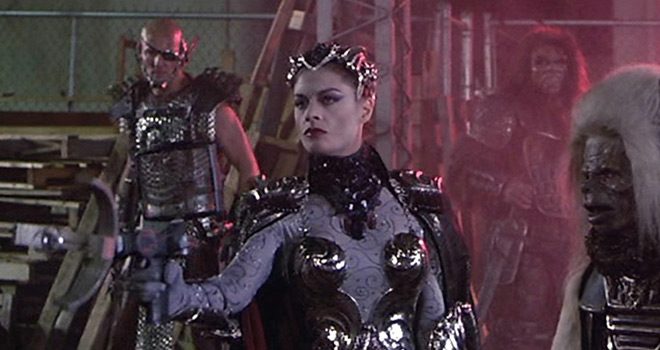 Masters of the Universe had its flaws, but what it got right is what has sustained its shelf life through the years. Just recently, fans old and new could watch the film on Netflix and a remake set for 2019 is in the works. One of the key elements in the film’s conservation is its villains. You cannot have a good hero without a good villain and Frank Langella (Dracula 1979, The Ninth Gate 1999) gave a beautifully restrained performance as Skeletor, one of his self-proclaimed favorite roles.

The three-time Tony Award winner and Oscar nominee is both sinister and magnetic, you can not help but be pulled into his orbit. Langella’s charismatic and captivating performance turned what could have been a one-dimensional character into a force you could not ignore—a Joker, a Loki, a villain that could steal the show.

One of the best aspects of Langella’s Skeletor is that you never realize it is him. The visual effects may have suffered a bit from the low-budget, but the makeup in the film did not endure the same fate. Various characters in Goddard’s Masters of the Universe were designed by William Stout, who has worked on over thirty feature films, including both Conan films, 2006’s Pan’s Labyrinth, and 2007’s The Mist. Stout was tasked with bringing both existing and new characters to life.

Skeletor’s minions, which included Beast Man, Karg, and Saurod, were all designed by Stout. Fellow artists Moebius and Claudio Mazzoli also created complex designs to bring realism to the characters, and in the hands of legendary Special Effects Makeup Artist Michael Westmore, the alien characters became very convincing. Skeletor’s makeup alone holds up as an incredible realization of a cartoon character. 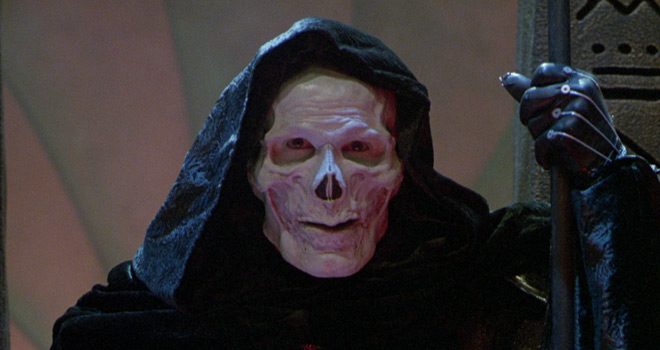 The costuming also stood out as a triumph for the film, keeping the otherworldly characters in the film from becoming cartoonish, including the character with the least amount of clothing, He-Man. As the story goes, Mattel wanted Dolph Lundgren’s He-Man to look exactly like the toy, which Goddard argued would look like a grown man running around practically naked. Stout eventually added straps, which kept He-Man’s chest from being completely exposed. A red cape and boots brought up to the knee made it more of a costume, while still appeasing Mattel’s vision. Who can forget the gorgeous head piece and fierce breastplate worn by Meg Foster’s Evil-Lyn? It is perfection. The metal accents give her character that hard edge and sense of power, while remaining visually stunning. Meg Foster’s hypnotic eyes did not hurt either.

Known for her performances in such films as 1981’s Ticket to Heaven and 1988’s cult classic They Live, Foster’s performance was also immensely successful as Evil-Lyn and the fresh faces, including a now very well known from the hit series Friends among other films, Courteney Cox, proved to be the right way to go. It is difficult to picture anyone at the time but 1985’s Rocky IV star Dolph Lundgren playing He-Man from a visual standpoint, but with only two movie credits under his belt by the time Masters of the Universe was released, Lundgren’s Swedish accent and somewhat robotic delivery prevented the character from reaching its potential.

Though Masters of the Universe takes its story to Earth where two teens run into He-Man and his gang on a mission to save the universe from his arch-nemesis, Skeletor, it does so in the most ’80s way possible. Gwildor, a Thenorian locksmith, played by Billy Barty (Legend 1985, Willow 1988), invents a “Cosmic-Key” that can open a portal anywhere by using sound keys, otherwise known as a synthesizer. Skeletor has stolen the key but Gwildor still has a prototype that He-Man and company try to use to free the Sorceress of Grayskull, but when things go awry they have to open a portal that takes them to Earth. Thankfully, it was the ’80s so when the Cosmic Key is damaged, one of the group’s new Earthling friend’s Kevin (Robert Duncan McNeil: Star Trek: Voyager series, Chuck series) can recreate the tones necessary to open a gateway back to Eternia. 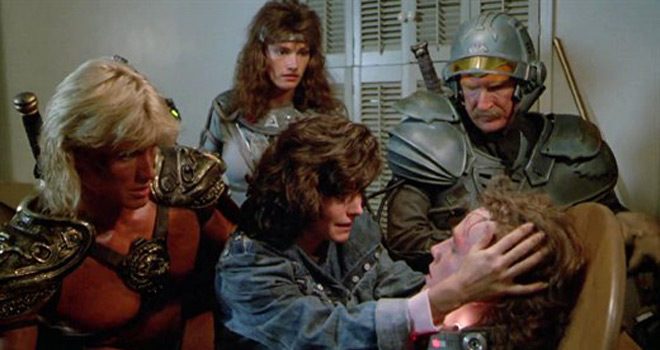 Masters of the Universe is undeniably cheesy, falling somewhere between 1980’s Flash Gordon and 1982’s Conan, albeit without the help of a fantastic soundtrack by Queen, but what makes fans continue to enjoy the film is the care that was put into its making. The production managed to create great characters that were cinematically successful. Its villains were exactly what you would want them to be.

With the announcement that a new Masters of the Universe will be out sometime in 2019, it is hard not to wonder where the film will go with the advancements in technology available today, but the characters ’80s kids came to love were carefully realized with detail and nuances that made them memorable. The scope of the universe that could have been might have disappointed some, but there is enough there to keep fans coming back for more even after 30 years. 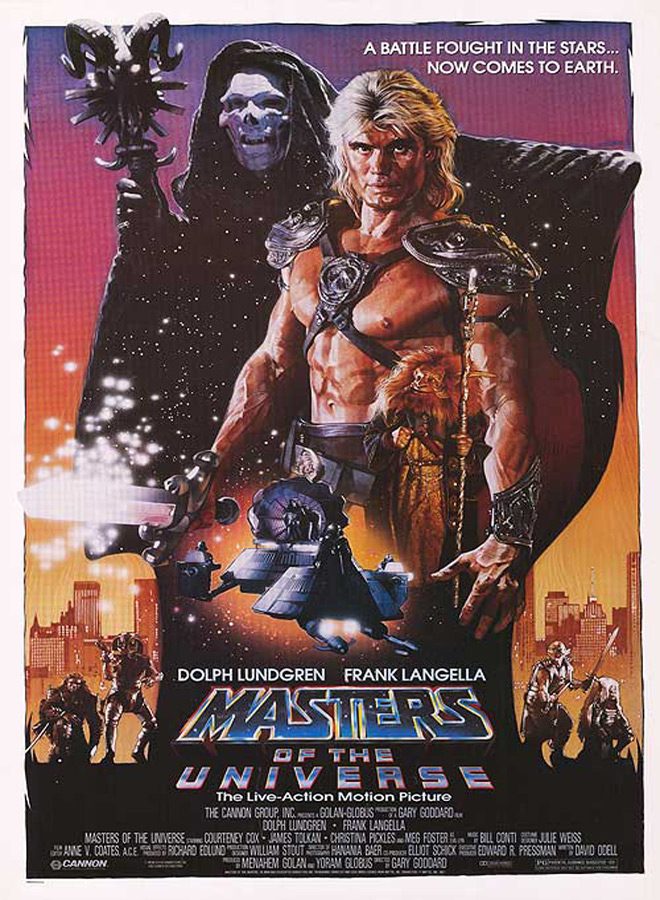