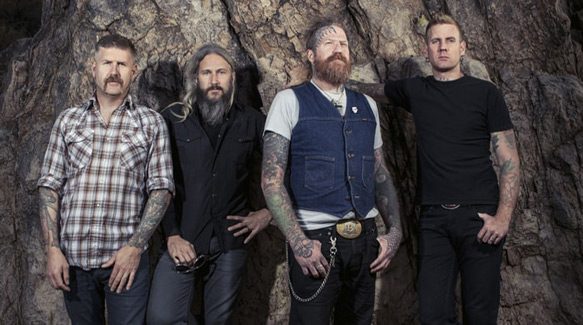 One of the more popular and universally respected American Metal bands around today, Mastodon has travelled a long path over the past two decades.

Hailing from Atlanta, Georgia, the band, formed back in 2000, consists of Bassist Troy Sanders, Guitarists Brent Hinds and Bill Kelliher, and Drummer Brann Dailor, all offer one unique quality over bands in the genre do not, they all sing. A stand-out factor, along with their mixing various styles ranging from Progressive to Sludge to Alternative Metal, Mastodon has risen from somewhat of a best kept secret of the Metal world to Grammy nominated stars. At many bands of their ilk rarely accomplish, their 2014 Once More ‘Round the Sun would be their second consecutive album in front of 2011’s The Hunter to break the Billboard Top 10.

Now three years later, the quartet finally return to make an impact with their new album, Emperor of Sand. Debuting on March 31st, this marks their 7th overall studio album and 5th overall with Reprise Records. Teaming up with Brendan O’Brien for the first time since the recording sessions for 2009’s Crack the Skye, Emperor of Sand is an 11-track offering with a wrap-around concept guaranteed to intrigue fans.

Following a desert wanderer who has been handed a death sentence, themes of death and the will to live are heard throughout the album. Kicking it all off with lead single “Sultans Curse,” a gentle chiming sounds, before making a way for a rapid change. Dressed with pounding guitar and emotional vocals, it talks of memories of loved ones passing by, making for an intense beginning to the record. Up next, with a slightly quicker beat, “Show Yourself” layers intense guitar and vocals. Recently releasing a vivid music video for the track, the lyrics call out someone on their flaws and self-centered approach. Quite telling, the words matched with the musical intensity urge the individual to show their true nature, all while delivering a message to them that they will meet again “on the other side of fire.”

Keeping that level of intensity, “Precious Stones” brings on a powerful drum intro. Also delivering an important message, it tells listeners not waste their time in life, letting them know every moment is precious, so take advantage of each opportunity given. In addition, Dailor’s fill-heavy drumming style creates a beat that makes another opposing tone rather than setting a pace for the music, thus presenting a phenomenal listening experience. Thereafter, “Steambreather” begins with a foreboding, slow-paced guitar intro before dropping into lyrics looking for validation and reassurance. A struggle within, there is also a sense of being unsure how to proceed.

Changing the mood up a bit, “Roots Remain” has a gentle intro that paves the way for a shift in pace with lyrics such as “and the sky opened up.” It intensely describes an environment of death before switching back to a lighter feeling. In the end, it features low whispery vocals that taper off into an intricate guitar solo and gentle keyboard outro. Quite breathtaking to say the least, “Word to the Wise” quickly picks the pace up a bit. It is this track the refrain stands out with smooth melodic blends of vocals and the realization that all the issues described thus far on the album were the result of lies and deceptions, some of which self-inflicted.

Keeping up to speed, “Ancient Kingdom” offers up explosive drums and a emotion release of defence, fighting back, and refusing to fail. Equally triumphant, drums and guitar melodies face off in the beginning of “Clandestiny” while offering protection. Complete with a robotic alien break, fit with strange tones, it is a jarring difference from the song itself. This comes before the screeching haunting sounds of “Scorpion Breath,” completes with themes about lies, fear, and stigma, which are complemented by guest vocals from Neurosis’ own Scott Kelly.

As the final song of the journey, “Jaguar God” starts off softly, with light picking guitar leading up to gentle vocals, but it is a long ride forward. The lengthiest song of all eleven, almost eight minutes to be exact, it is a remarkable way to complete Emperor of Sand. Representing the fight and will to survive, dipping and diving in textures throughout, it returns to a lively beat and fierce guitar solo before fading to black.

Musically, Emperor of Sand is reminiscent of what one might expect of a heavier version of a Coheed and Cambria meets Soundgarden mashup. The main concept of crumbling and falling down, it is important to realize it is not all doom and gloom, but rising again is imperative to living on. Mirroring the real life struggles of a cancer diagnosis, suffering through treatment, and everything that comes along with it, for many, this theme will hit home. Overall, Mastodon masterfully create an even-paced album with epic vocals pairing with potent melodies, which is without question a surreal listening experience fans will love. CrypticRock gives Emperor of Sand 4 of 5 stars. 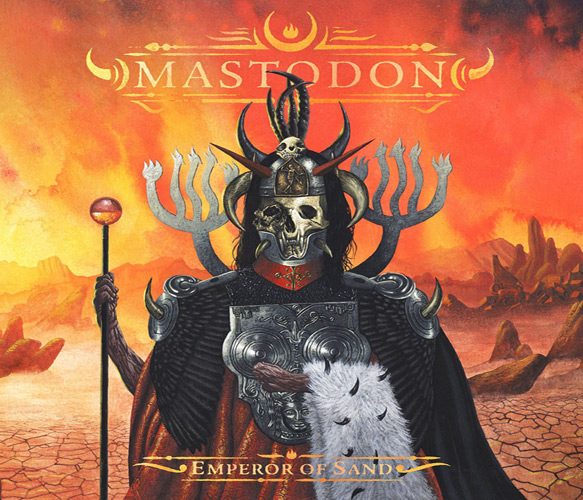