Initially premiering at the South by Southwest Film Festival in March 2017, new flick Mayhem is one of the best of 2017. Wow, that is quite a bold statement! Directed by Joe Lynch (Wrong Turn 2: Dead End 2007, Knights of Badassdom 2013) and superbly written by Matis Caruso, it is an all-out Action Horror Thriller filled with blood and bad intentions. Intrigued yet? Well prepare to be as it is set for On Demand/Digital HD November 10, 2017 through RLJE Films. 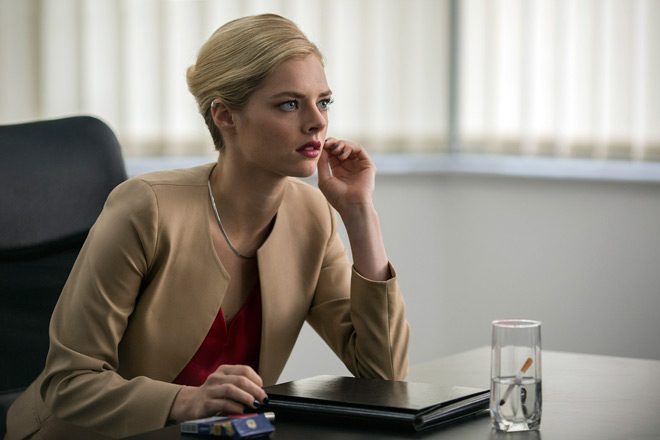 Taking a step back from the bold introduction, to put it simple, Mayhem is a film about a virus that does the unexpected to those that contract it. Do not be fooled, this is not your typical virus, there is no brain eating and zombie mutilated flesh here. Let us just say that even though it does not cause its victims to rise from the dead it is still a killer!

The story follows Derek Cho (Steven Yeun: The Walking Dead series, Okja 2017), who is a mid-level business associate climbing the corporate ladder in order to gain that top floor and corner office. Melanie Cross (Samara Weaving: Three Billboards Outside Ebbing, Missouri 2017, SMILF series) is a desperate homeowner hoping to do whatever it takes to make her visit a successful one. John Towers (Steven Brand: The Scorpion King 2002, Teen Wolf series), also known as the “the boss,” is exactly what one would expect from a top level corporate sleazeball.

John Towers  is ruthless, misogynistic, and just plain cold. The Siren (Caroline Chikezie: Æon Flux 2005, Eragon 2006) is the woman that comes before the man. She can get “the Boss” to look in any direction. Irene Smythe (Kerry Fox: Shallow Grave 1994, Bright Star 2009) is the cold and frigid high flying business woman. Finally, The Reaper (Dallas Roberts: Walk the Line 2005, The Grey 2011) is what his name entails.

All this in mind, after working his way up the corporate ladder, Derek thinks he is riding pretty high. He finally make it to the top floor and he believes he will be a success. That is until the day that he loses his faithful coffee mug and …..sanity. Melanie, the desperate homeowner, is looking for some salvation and peace of mind, posing as a lawyer to get her foot in the door, she gains the respect, if not for a short time, from Derek. 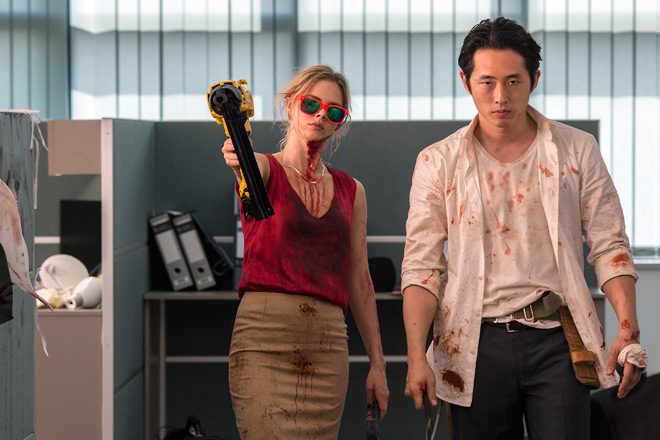 Derek finds out shortly after meeting with the fake lawyer he is the victim of dark corporate politics. Thinking he can make a difference when it comes to his career and outcome he decides to go see The Siren. She of course has no problem having an employee set up so she can slither on by. Not happy with the answer The Siren has given him, Derek decides to take this situation even higher up to “The Boss” and, as anyone could guess, they do not really care about a mid-level associate and his plea for employment. After a visit from The Reaper, Derek is already feeling the aggression festering inside, and that is when the main plot line comes to view.

After realizing that a virus has been set loose on a unsuspecting cooperate building,authorities put the building under quarantine, telling no one of the contagion until the front doors are sealed up with caution tape and assault weapons. Finally realizing what is going on, those inside the building are told that they must remain in the building until the virus has subsided. Oh yea, they will have 8 hours to wait until the doors will be opened and the people set free. Of course, thee is this one very important guideline that should be followed, remain calm! This is their only guideline and safety tip. As one would imagine, paranoia and madness ensue as people look to stay alive during the duration of the virus that will either get them killed or will have them killing.

For any of you who are asking what kind of virus is being dealt with, think the rage as seen in 2002’s 28 Days Later, but without those infected having the supersonic speed. Unless those were your worst intentions. Just like the virus in 28 Days Later, they are highly contagious and vile, but there are no zombie symptoms and it does not take a bite for the person to be infected. In Mayhem, the infected act out their worst impulses, much like 2013’s The Purge, but with a virus. 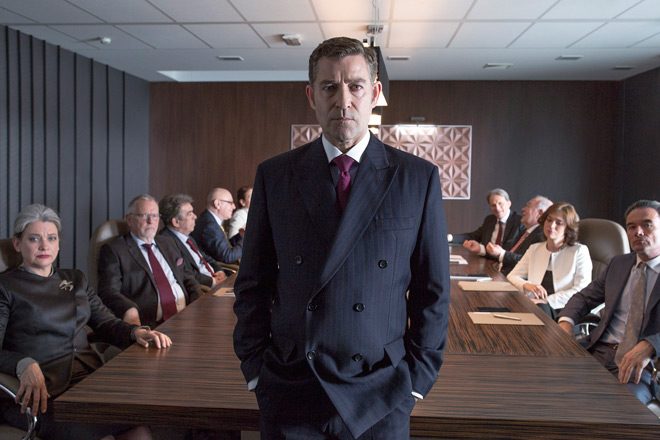 Furthermore, the violence that is portrayed in Mayhem is similar to that of The Purge and 2016’s The Belko Experiment. It is unhinged and unforgiving, even when there are alliances made there is always only one survivor. So let us not assume that Mayhem copied or stole the idea of The Belko Experiment, because even though they are similar in some ways, Mayhem does hold its own. It has some great acting and there is no government experiment afoot. Or is there?

The violence aspect of the film alone is freaking crazy, there is no calculated precision in the way the victims get picked. Its purely chaos, and well, mayhem. Not to mention, they have Steven Yeun’s character narrating the introduction to the movie and giving everyone an insight into the mind of today’s career oriented devotee. Which sounds like sarcasm, but be assured it is not, and that comment is quite sincere. That said, the narration is without a doubt humorous.

So with everyone taking each other out without a care in the world, Derek still has something on his agenda and that is career advancement. Hey, these days you have to be ruthless, especially in the business world. You have to be ready to rip some heads off, though usually it is figuratively, but this works too. With demands aimed at the The Nine, the business board that usually decides who is going where and when, Derek teams up with Melanie who hopes to get her day’s demands met as well. 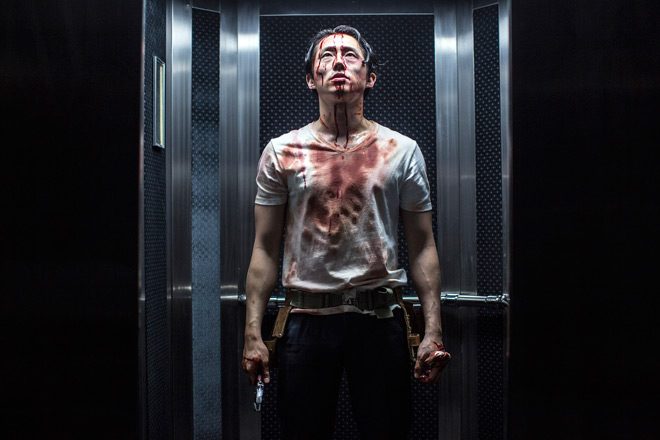 Soon finding a way up to The Nine, they finally hope to get the justice they deserve. Let us not forget that Derek is still a guy looking to climb his way to the top and will stop at nothing to do it. Then again, so will Melanie, and even though she does not have a career with benefits and the corner office with vehicle allowances, her home is enough to keep her from leaving without getting the answer she is looking for. Do Derek and Melanie get the justice they deserve? Will The Siren be silenced? When will the chaos end?

Overall, Mayhem is sickening yet humorous. There is laughter and tears. There is action and horror. There is sex and violence. It is full of destruction and disorder. Everything from the cinematography to the music score works seamlessly. Fast-paced, action-packed, and blood-soaked, just in time for the season of macabre, as well as havoc, CrypticRock gives Mayhem 5 out of 5 stars. 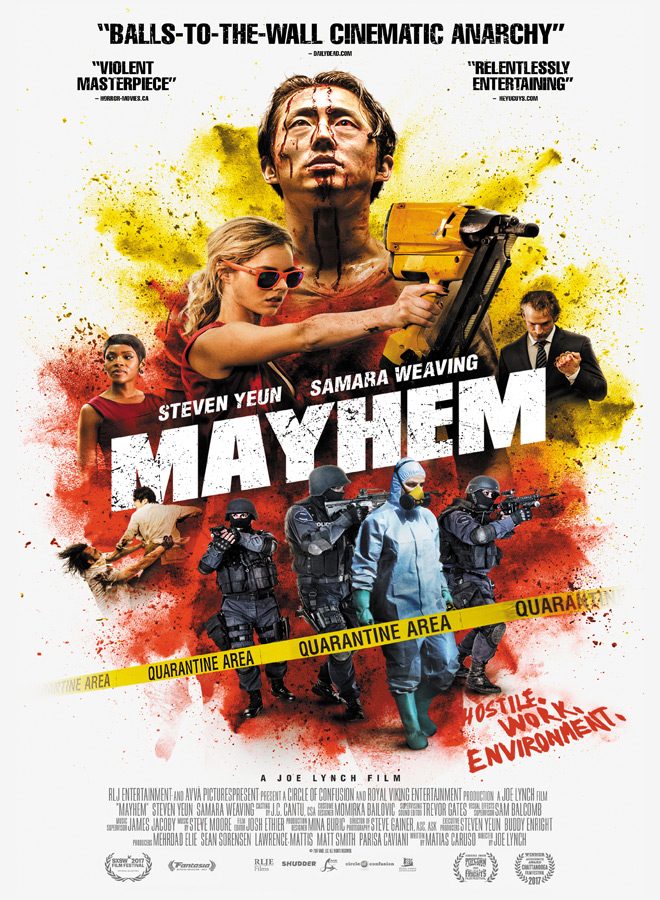