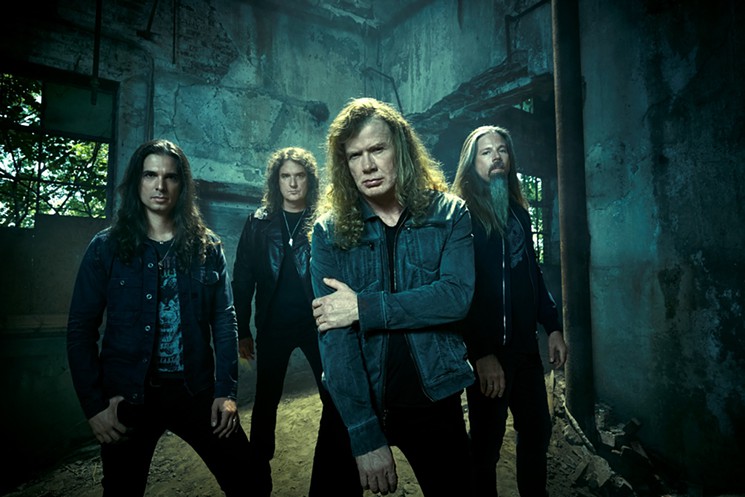 Heavy Metal band Megadeth came together in Los Angeles, California back in 1983 when Guitarist Dave Mustaine and Bassist David Ellefson joined forces. Coming shortly after Mustaine was dropped by Metallica, the twenty-two year old decided to continue his career in music by creating his own band, in his own vision. Rising to the top of the Metal world quickly, Megadeth’s 1985 debut album, Killing Is My Business… and Business Is Good!, was only the beginning, and just a year later, they released the epic Peace Sells… but Who’s Buying? The success of the record launched Megadeth into the Thrash Metal scene with screaming guitars and hypnotic vocals. Through ups and downs, the band pumped out another excellent album in 1988 with So Far, So Good… So What!, and what is considered one of their best, 1990’s Rust in Peace. The wave of popularity did not cease there and Megadeth went on to release three more consecutive platinum selling albums; 1992’s Countdown to Extinction, 1994’s Youthanasia, and 1997’s Cryptic Writings.

A top of the Metal scene, Megadeth rank alongside Anthrax, Slayer, and Metallica, in the recent decade known as “The Big Four.” Now over three decades later, Mustaine has survived substance abuse, a debilitating injury to his left arm and hand, and several band lineup changes to still have Megadeth standing strong. Releasing one impressive record after another, including 2013’s Super Collider, Megadeth are back in 2016 with Dystopia. Their fifteenth overall, it is produced by Mustaine, along with accomplished Metal engineer Chris Rakestraw, the latest edition of Megadeth consists of Mustaine on vocals/guitar, Ellefson on bass/backing vocals, Lamb of God’s Chris Adler on drums, and Angra’s Kiko Loureiro on guitar.

Re-charged, Dystopia starts with echoing vocals by Jordanian Farah Siraj in Middle Eastern style before being struck with heavy and fast signature Megadeth riffs. Lyrically speaking of violence as conditioning so as to withstand enemies, leper sea plaguing the nations, and blood lust that is ever present within each and every man, the song is a solid start to the album. Next is the title-track, “Dystopia,” which shows hints of both melodic Metal that will appease die-hard fans with its screaming riffs, while its new age style will appeal to new fans through the use of catchy cadences and rebellious lyrics. Nonetheless, the classic Megadeth shredding comes in and out throughout the entire song. Deep in meaning, the words express, with a dystopian society plaguing each corner of the earth, how does one fix society? The answer, one must cure the cancer at its roots.

Then there is “Fatal Illusion,” which has the classic Metal sound that Megadeth is known and loved for. With a slow and chugging chord progression, the song prepares the listener for a wild ride as the first riffs bring them up at a slow pace, preparing them for the sudden rush of endorphins. Then, with a fast-paced and grooving bassline of Ellefson, the track brings about rushing leads along with powerful rhythm. Without stopping, Megadeth throws their audience though the chaos of notes and shows them that life is nothing but a fatal illusion. If evil never dies, everyone will just have to focus on the music instead.

With a steady drum roll and rhythm, “Death from Within” grants the fans passage into the world of Metal with a deep and full set of notes with a mixture of Western progressions and some harmonic riffs akin to those of the Middle East. This cut keeps moving along with no place to run and nowhere to hide. No one is safe from the catchy nature of the addictive song, and that is a blessing. Then, with an acoustic introduction, “A Bullet to the Brain” fools the listener into thinking there is a soft side to Megadeth, but right as their mind falls into the trap, distorted guitars and steady drum beats of Adler return to remind of Megadeth’s beautiful chaos.

Moving along, “Post American World” questions the true impact of America on the world and the social scene. The track addresses sensitive subjects such as racism, stereotyping, and selfishness. With the planet becoming one big spinning disaster, Mustaine pulls no punches to talk about segregating ourselves by class and size. This brings about the question, what will it look like in the post American world? After posing such a question, a slow and melodic section mimics the deep thought process a person might go through only to be clouded by the screaming riffs of distorted guitars. Coming on with yet another acoustic intro, “Poisonous Shadows” features an interesting melody that seems to draw inspiration from harmonic minor scales, which sound exotic due to a raised seventh note. Also featuring some nice piano work by Loureiro, the music sets the mood for a dark and lonesome track that keeps the listener company as they crawl through their own nightmares.

Furious and unforgiving, “Conquer or Die!” starts off with a melody similar to that of a Flamenco, with arpeggiated triplets and calm introduction verses of acoustic guitars. As your heart begins to settle, a final pitch harmonic leaves you in the dark until the fire of Metal lights the way as distorted guitars shred and sway with burning passion. Although only instrumental, the song is still just as interesting and compelling as the rest. Without a moment to spare, “Lying in the State” rushes in with pounding guitar riffs and powerful lyrics. The fast and steady guitar riffs remain present throughout the entire track, keeping the blood flowing and the music coming. It also raises the idea, with a broken backbone and nothing left to lose, how will the world remember us?

Next, “The Emperor” keeps the music fiery with a question: “Who do you think you are?” When your world is ruled by a tyrant, how can you stand to be silent? This track has a much more Melodic Metal style rather than the usual Thrash sound Megadeth offers, and it shows the true creativity and versatility of the band. Then, Dystopia concludes after forty-six plus minutes with “Foreign Policy,” a song that keeps the listener’s adrenaline flowing with a familiar sound, as well as a rebellious and dark set of lyrics. With pounding rhythms, speeding riffs, and heavy vocals, Megadeth keeps the intensity high until the final note.

After taking a deep breath, one will easily decide Dystopia is an excellent album. Fans of the older Megadeth style will find appreciation in the returning style while also being treated to a new flare that has been added to each track. Even fans of new age Metal will be able to listen to this album and jam along with its catchy melodies and heavy drum beats. Mustaine and company have done it again, and for that, the Metal world says,”Thank you!” CrypticRock gives Dystopia 5 out of 5 stars. 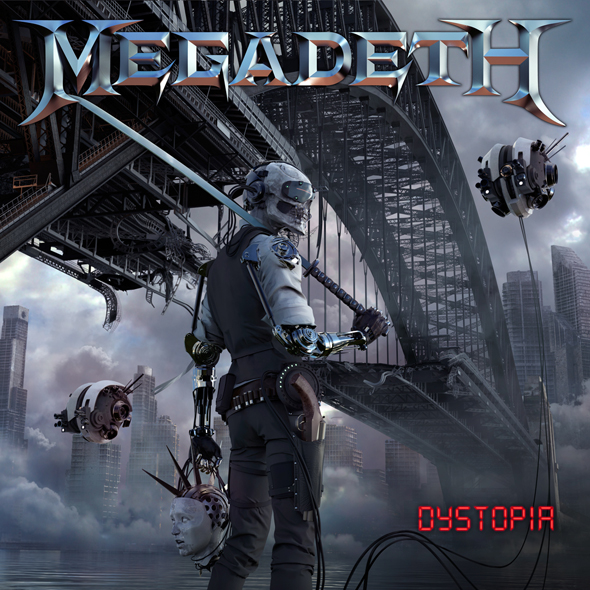