Twenty-five years in human terms is quite significant. From birth, it signifies the entirety of one’s journey from helpless infant to beyond the gates of adulthood. It contains each stage of development, and frankly, is quite a long time. To write a piece of music and have it endure such a span is not only significant, but rare indeed. For Los Angeles, California’s Megadeth, 2015 marks that very two and a half decade anniversary of the release of an album many consider to be the pinnacle of their career. Rust in Peace, their fourth album, was delivered in September of 1990, screaming, healthy, and vibrant, and born only seven years after Lead Guitar/Vocalist Dave Mustaine formed the massively influential band back in 1983.

Countdown To Extinction, the 1992 follow-up, may have experienced greater commercial success, and may be the one album casual fans will always point to, but the ardent Thrash following that Megadeth built up generally agrees that Rust in Peace was the one that their first three albums were building towards. As powerful as those albums were – Peace Sells. . . But Who’s Buying (1986) is another fan favorite which helped put Megadeth on the worldwide map – Rust in Peace elevated the band into a stratosphere so rarely attained by anyone in any genre. The music resonates today with as much fury as it possessed upon its initial release.

Sobriety may have played a role in the acumen and quality on Rust In Peace, as Megadeth had prior to this existed in a miasma of addiction and self-destructive hi-jinx that might have destroyed them. Mustaine called it quits and replaced some of the miscreants. After quarreling, problems with heroin, and the instability that goes with these issues, Megadeth prepared to write their fourth album with Drummer Nick Menza and Guitarist Marty Friedman on board, complementing the duo of Mustaine and co-founding guitarist, Dave Ellefson. Considering these developments, it is no surprise that this moment in time produced an album of such a massively high caliber. Remember, Dave Mustaine came from Metallica, and though many still argue how big a role he played, it is clear that Mustaine had a lot to do with the success of 1983’s Kill ‘Em All and even an integral bit of 1984’s Ride The Lightning.

Rust in Peace can proudly sit up there with Reign In Blood (Slayer – 1986), Master of Puppets (Metallica – 1986), and Vulgar Display of Power (Pantera – 1992) among the absolute elite of Metal albums ever released. The first reason for this is the sound they achieved. Recorded in Rumbo Studios with producer Mike Clink, the guitars slice like a katana through silk, while the drums sound massive and crisp. From start to finish, there are zero weak moments. The only departures from absolute Thrash mastery are the happy-go-lucky “Lucretia” and the dark, post-apocalyptic Ellefson penned dirge “Dawn Patrol.” Different, yes. Weaker, no.

The album takes off with first singles and live-staples-forever-after, the inimitable “Holy Wars. . . .The Punishment Due” and “Hangar 18.” Released at the height of our nuclear fears, the former reaches for, and grabs with both hands, the zeitgeist of paranoia that surrounded this pre-internet world. Combined with a healthy interest in UFO’s, and the government’s supposed role in hiding them from the public, “Hangar 18” became instantly legendary. “Holy Wars . . .” comes in at six and a half minutes in length, somehow maintaining its viciousness without one iota of let-up. Maybe not as hyper-fast as Thrash was wont to go, the song did not need to rely on speed as its only weapon. A tour de force of intent, its sharp execution and wickedly political narrative featured moments of Middle-East sounding guitar, followed by that floor-tom heavy, palm-muted guitar thunk beneath Mustaine’s sneering growl. The mid-section breakdown with Mustaine’s cold, lightning-fast riffing, the utter conflation of the instruments into perfect harmony, ensure the song is and remains to this day a monument of Thrash perfection. Leads that are still on fire 25 years later, and a sense of (thermo) dynamics nearly unrivaled in any era, the song ends with, “next thing you know, they’ll take my thoughts away.” What a warning to the post millennial era of government spying and the trammeling of free thought we see going on today! “Hangar 18” is by contrast a more mid-paced affair. Featuring one of the better bass-guitar sounds on the album, the trade-off leads and harmonic approach to the verses makes for a legendary combination that kept the song a stolid fan favorite, right up to the present day. Its latter half could be used as an educational lesson in soloing for all prospective guitarists.

What follows next are two songs that instead of taking a backseat to the opening duo, bolster them by being just as awesome. “Take No Prisoners” is as lyrically sharp-tongued as it is wickedly forward thinking in its make-up. Anti-military perhaps, but only from the perspective of the government’s habit of sending young men to die for financial interests in hell holes we have no business visiting. The hardcore vocal approach echoed the style of the era, with bands like Anthrax and Exodus featuring those gang-shout additions to the lead vocal repertoire. A stop and start, creative outburst at a Punk-Rock efficient 3:29, “Take No Prisoners” is a high-energy dose of rebellion of extremely worthy Thrash. “Five Magics” builds with its adroit bass-guitar and tension-mounting harmonies. A rare fantasy-themed song in the Megadeth canon, it comes at an odd time lyrically, following as it does such political, real-life commentaries. Megadeth’s ability to drop hyper-fast solos and slower, melodic ones into the ever-changing tempos and riffs is once again apparent. Three minutes and twenty-five seconds in, the guitar sound is perfect inside that pre-chorus breakdown. Back to the verses and the Mustaine/Friedman duo once again is sharper and more cutting than any of these ultra-modern bands could ever hope to be, here, 25 years later, with all their studio gimmickry.

“Poison Was The Cure” clocks in at a hair under three minutes. It builds up nicely and blasts off into a rollicking Punk-inspired anthem with Mustaine self-referencing his own journey through a pretty bad relationship. The breakdown once again drops in unexpectedly. “Once stalked beneath your shadow, sleepwalk off to the gallows, I’m the sun who beats your brow in, til I finally threw the towel in.” Incredibly enjoyable, Megadeth manage to throw in their leads and their dynamics, compressing them down to this short track length. The magic was there on this record, plain and simple, whether sprawled out over five plus minutes or down into Punk-Rock length territory.

“Tornado of Souls” comes along in the middle of the album, like a breath of fresh air. A sing-along melodic masterpiece, it features some of the most enjoyable vocal arrangements the band has ever written. As wide-open and melodious as “Poison..” was tight and livid in its velocity, “Tornado of Souls” is the epitome of thought-provoking Heavy Metal, melancholy but still upbeat.

The title track could be the soundtrack if nuclear war ever actually happened. That was Mustaine’s intent and he completely achieved what he was attempting here. Built on a complicated song structure, the self-narrative of Polaris, a nuclear missile, and the perspective such a thing might have, the song culminates an album that truly, completely, and for all time achieves Heavy Metal greatness. Once again, speed is not the medicine administered. The song is mid-paced, but features enough good riffing and a well-placed, well-written chorus which once again shows the nimble skills of Nick Menza, as he laces his drums round the tune.

Rust In Peace was and is the culmination of the old school fury of embryonic Thrash and the newer school, progressive, more Rock oriented direction that the big players in Thrash Metal would begin to undergo as the 1990’s progressed. One gets the feeling that Megadeth could never have topped this album, and therefore a shift in direction was inevitable. Where they went in their career after this one is always up for debate, but Rust In Peace stands alone as one of the finest edifices of Thrash Metal perfection ever laid down in a studio. Twenty-five years later, it is an album every single Thrash Metal band that came after it only wishes they could make. 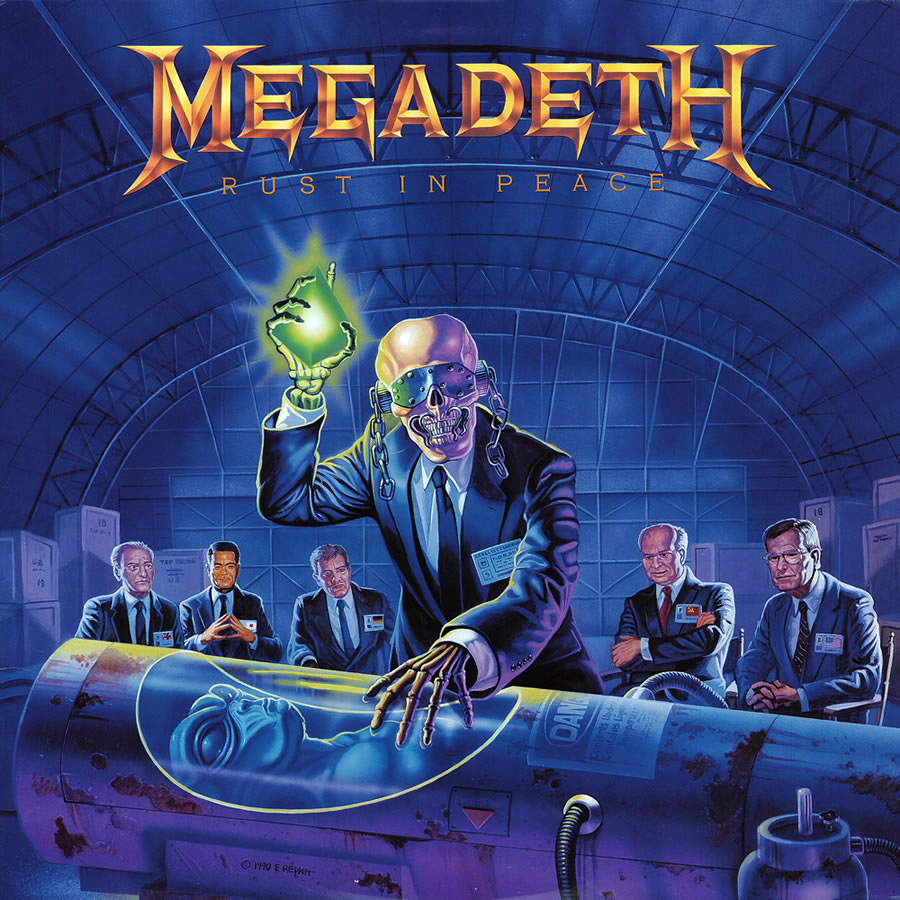