Men in Black – Something You Remember 20 Years Later

Men in Black. Just the name sends an adrenaline rush through the entire central nervous system of even the most jaded Sci-Fi aficionado. For humans with an insatiable appetite for all things otherworldly and alien, catching a whiff of anything uniquely Sci-Fi sends these creatures racing to the theater in droves; not surprising considering that they have been on a bland diet of trite renditions of hostile alien invasions. Thus, the unveiling of Men in Black steamrolled over the red gingham-covered picnic basket of blockbusters that year and left its tread marks for all to see. 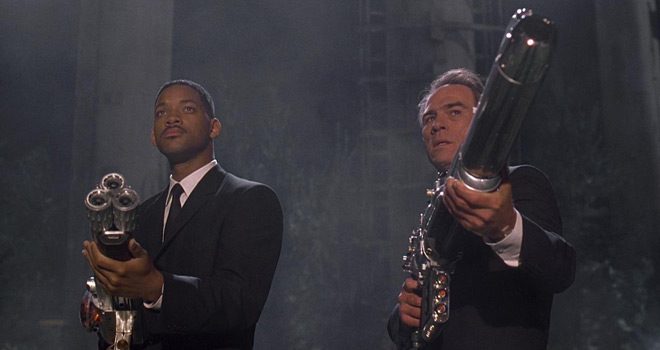 Unbelievably, it seems like only yesterday, instead of 2 decades ago, that Director Barry Sonnenfeld (Addams Family 1991, Rv, 2005) served up a celluloid platter of a sumptuous, finger-licking good cinematic entrée with the intriguing moniker of the Columbia Pictures hit Sci-Fi Comedy Men in Black. On Wednesday, July 2nd of 1997, the silver screen was emblazoned with the truly unique personalities of Kay and Jay. Kay was played by Oscar and Golden Globe recipient Tommy Lee Jones (Batman Forever, 1995, No Country for Old Men, 2007), while Jay was depicted by multi-Grammy Award recipient Will Smith (Independence Day, 1996, I Am Legend 2007).

Opening in theaters right before the Independence Day holiday on Wednesday, July 2nd of 1997, the movie begins with Jay (Smith), an NYPD officer, chasing a perp who unbeknownst to him is an alien in human form; he notes that the criminal’s actions are a wee bit strange. He is also unaware that he is being watched by Kay (Lee Jones), an MIB agent, who later zaps him of his memory regarding the alien encounter. Kay sees potential in Jay as a new partner and hands him his card and sets up an interview for him. Jay arrives late to the interview and goes through a shooting exercise filled with aliens, humans, and animals. 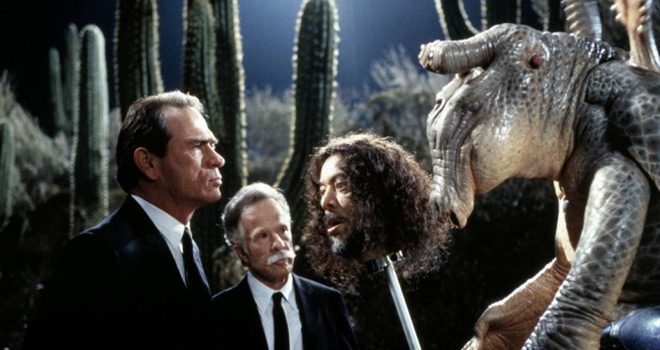 He passes MIB testing sequence with flying colors and is handed his new role as Kay’s partner along with his black suit, Ray Ban sunglasses, and his own neuralizer. Alas, the price of his induction is high for he must kiss his past goodbye forever. That includes no contact with family or friends. As he gets his bearings as an MIB agent he is privy to a whole new world and the realization that New York has a hidden airport like terminal swarming with alien life forms masquerading as humans and living la vida loca on Earth!

It is during this time an intergalactic crisis develops and Jay is thrown into his first mission that if it is not resolved with split second timing and a cool head could result in the absolute destruction of Earth. This mission involves the securement of the Arquillian Galaxy in one Earth hour. Not a lot of on the job stress here for a rookie! What follows is a series of wacky events that take moviegoers on a spectacular ride through the world of Science Fiction.

Proving it was a summertime event, Men in Black’s opening weekend weighed in at an estimated $51 million. For the entire year, it was an eye-popping and jaw-dropping cash cow, making it 1997’s third highest grossing film. So why was it so successful? Well, Men in Black had the perfect recipe for a summer hit – an action-packed movie that delivers side-splitting comedic relief on a topic that has intrigued mankind for centuries- the existence of aliens. 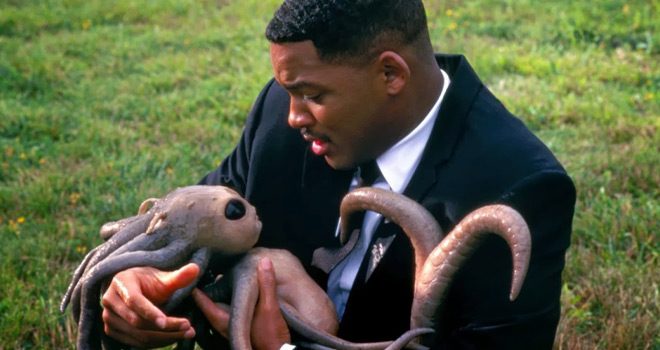 Interestingly, although not too uncommon nowadays, Men in Black was an adaptation of a Marvel Comic book series by the same name created by Lowell Cunningham. Based on CIA-esque activities of a covert organization, MIB, their mission is to monitor the diverse assortment of alien beings who seek refuge on planet Earth and ensure the safety of all by any means necessary. In other words, this smacks as an alien version of Mission Impossible! However, unlike the beloved Mission Impossible, those in MIB do not have a choice of whether or not to undertake the mission at hand and there is no tape that self-destructs – Just the mind neuralizer which is a pocket sized gadget that erases memories.

The popularity of this movie set the stage for future sequels, 2002’s Men in Black II and much later, 2012’s Men in Black 3. Furthermore, the franchise extended its tentacles from fast-food merchandising to mass market inundation of MIB related apparel, games, and action figures to satiate an MIB addiction. The original Men in Black even served as an inspiration for a cartoon series which aired from 1997 through 2001. Not only that, Ray Ban Predator sunglasses flew off the racks. Retailers rushed to stock shelves that were being rapidly depleted by the high demand of consumers. That said, accomplished Special Effects Artist Rick Baker (Star Wars: Episode IV – A New Hope 1977, Planet of the Apes 2001) did a phenomenal job creating his alien likenesses. The fact is the fever caught on quickly and everyone wants to be as cool as the Men in Black. All you had to do was get a black suit, a pair of Ray Bans, and a noisy cricket. 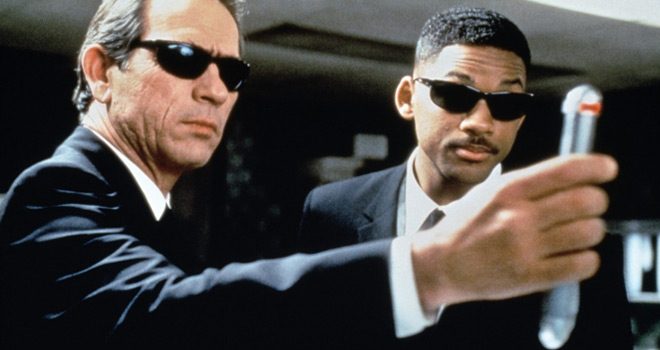 Who would have thought that this comic book adaptation would eventually become such a phenomenal success? Even after 20 years, it is still a mainstay of popular culture. Singlehandedly, this movie opened the floodgates to movie sequels. Sales for MIB inspired Ray Bans rocketed. Men in Black was added to the birthday theme rosters and to Santa lists for presents. There were an influx of posters, action figures. Everywhere you looked there was some visual reminder of Men in Back. Amazingly, for a hefty sum, one could even purchase a replica of the neutralizer! Impossible to erase from the memory, successfully infiltrating popular culture, Men in Black is something you certainly remember two decades later and beyond. 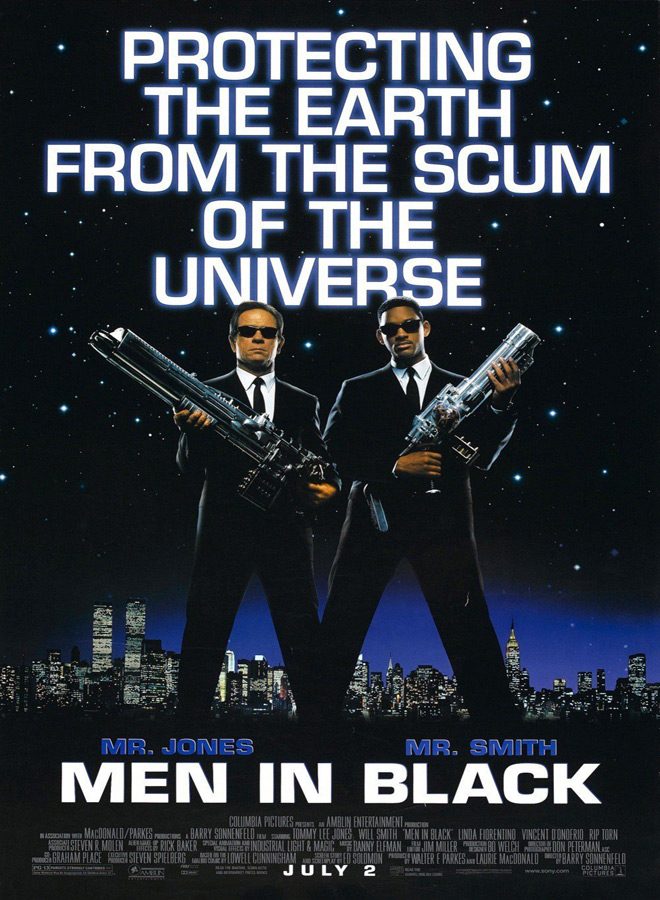