Sweden’s Tech-Metal pioneers, Meshuggah, are back with their long overdue new album Immutable, released via Atomic Fire on April 1, 2022.

Recorded in Sweden’s “Sweetspot Studios,” it marks the band’s ninth overall studio album, is their first ever not with Nuclear Blast, and is the follow up to their 2016 Grammy-nominated The Violent Sleep Of Reason. Now, anyone who has followed Meshuggah over the last 3 decades know that this band blows minds for a living. So how does Immutable stack up against their prior material? Well, some might argue that it is one of their most explosive and fearlessly creative studio album yet. Consisting of 13 songs, it is full of surprises and yet instantly recognizable as the work of Metal’s most idiosyncratic force.

It all begins with “Broken Cog” reeking of the brutal onslaught of Progressive Metal that Meshuggah has pioneered since their inception back in 1987. Featuring a long, tense intro that progresses to the classic Meshuggah sound at 35 seconds, before you know it Vocalist Jens Kidman enters with the attention grabbing lyric “Inside, watching the core of whatever, we had left of our lives.” Haunting yet full of anticipation, it is the perfect opening track for the album.

Then there is “The Abysmal Eye,” a single released back in January as a teaser to Immutable. A song that had many fans revved in anticipation, it is a solid track with its strong point being the main riff and chorus. However, the intro may have some fans comparing the sound to 2008’s classic “Bleed.” Nonetheless, the album does not let down from here with much the context redefining and redesigning the Meshuggah sound quite nicely. This is explanatory within the other hard hitting efforts of “They Move Below,” “Black Cathedral,” and “Phantoms.” That in mind, despite all of challenges within the last couple of years, the progressive principles that have always informed Meshuggah’s artistic efforts remain as cherished as ever. So as we spiral towards a dystopian future…Meshuggah will still stand alone.

The truth is while being relatively underground, Meshuggah are still consistently influencing the world of Metal and reminding us that innovation in the genre is far from dead. Immutable proves that Meshuggah show no signs of following any trends as they stand true to their sound and integrity. There is also a respectable level of experimentation while Meshuggah retains their signature sound. Despite all of this, you still can not help but feel that at times certain elements have been regurgitated. Nonetheless still a very solid, effective, and ambitious, Cryptic Rock gives Immutable 4 out of 5 stars. 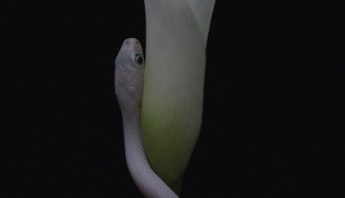 Animals As Leaders – Parrhesia (Album Review)
Like the in-depth, diverse coverage of Cryptic Rock? Help us in support to keep the magazine going strong for years to come with a small donation.