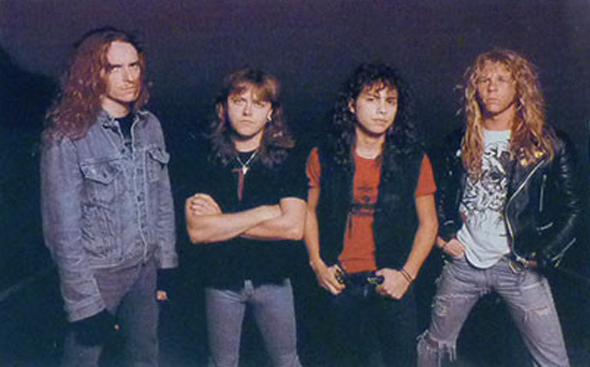 One of the most pivotal moments in Heavy Metal history was in 1981 when Lars Ulrich (drummer) posted an ad in the newspaper to form a band in San Francisco, CA where James Hetfield (vocals/rhythm guitar) responded. At that time, they had no idea what bright future was ahead of them. With the strong personalities between Hetfield and Ulrich, they brought something new to the American underground Metal scene, where people did not know how to react. Dave Mustaine was the original lead guitarist, which, to his surprise, was kicked out in 1983 before Kill ‘Em All completed. Kirk Hammett left the band Exodus as the eventual replacement. Mustaine formed his own rival band, Megadeth, shortly after. Cliff Burton joined in on bass in 1982, where many refer to his years with the band as “the golden era.”

During this period of time fans clearly always turn to, Metallica aggressively kicked off their career to showcase a fresh style with a turbulent speed and a “So What” attitude, which was projected in the aforementioned Kill ‘Em All. Production quality continued to excel where the arrangement and formation of an album changed in 1984’s Ride the Lightning that includes the emotional ballad “Fade to Black.” Unknowingly at the time, this set up a foundation for 1986’s Master of Puppets; the album that is known as one of the best Heavy Metal albums of all time.

After independently releasing the said Kill ‘Em All and Ride the Lightning, Elektra Records peaked an interest in Metallica and signed a deal which made it their first time under a major label. Ulrich, Hetfield, Hammett, and Burton stayed true to themselves and wanted to hone their skills and push the envelope even further on the next record. The only goal was to progress as a band, and they were clueless that they were headed in such a monumental direction. Master of Puppets was the first album that did not feature any songwriting contributions from Mustaine and it was their longest recording process at that time. It took nearly four months to create, from September 1st to December 27th, 1985, at the Sweet Silence Studios in Copenhagen, Denmark with Producer Flemming Rasmussen.

Master of Puppets‘ worldwide release was on March 3, 1986. Thirty years later, this historical creation was the first Thrash Metal album to go platinum. Since then, Metallica has become one of the biggest names in Heavy Metal. On this particular release, the band decided to go against traditional preliminary promotions including singles, music videos, and airplay, however, it managed to sell 500,000 copies in the first year alone. Presently, Metallica has sold over 100 million albums combined and has toured all over the world.

Master of Puppets was meticulously planned out where every detail, including the artwork, did not go unnoticed. Designed by Metallica and Peter Mensch, and painted by Don Brautigam, it depicts a Gothic imagery on the album’s recurring manipulation theme. It still draws viewers and listeners in, which many have to this day hanging on their bedroom walls. The artwork displaying a cemetery landscape with white crosses being controlled by a pair of strings in the midst of a blood-red sky has become an iconic piece.

Reflecting on the opening riff in “Battery” holds the similar pattern as the prior Ride the Lightning with the Acoustic introduction of “Fight Fire With Fire” as it brings in a different serene-esque introduction. It is layered with Acoustic guitars before the electronic distortion hits. The bass rumbles in shortly after until the instrumentals magnifies to a speedier rhythm that fans continue to headbang and scream out “Battery.” There are two meanings to this track, the first involves the San Francisco Thrash Metal scene in the ’80s referring to a club that Metallica was known to perform frequently at, the Old Waldorf located at 444 Battery Street. The lyrics hinted this by describing moshers and circle pits with “Circle of destruction, hammer comes crushing. Powerhouse of energy. Whipping up a fury, dominating flurry. We create the Battery.” The second meaning relates with lashing out in anger in a sense of “assault and battery,” yet both have been equally interpreted.

“Battery” set the initial aggressive tone for the album, however, the titled track, “Master of Puppets,” kicked off the overall concept of powerlessness and manipulation. Considered to be one of the most disturbing and truthful songs about drug and alcohol addiction, many have related this track to heroin or cocaine with lyrics including “Needlework the way, never you betray,” and “Chop your breakfast on a mirror.” Furthermore, with “I’m your source of self-destruction,” it is revealed how one is consumed with their own life-threatening addictions. The musical shifts between speedy riffs and melodic breaks add to the storytelling as the addictive chaos is displayed through Hammett’s brilliant solo. Over the years, it has become one of the most demanding tracks to hear live. The unforgettable melodic shift that hits just under the four-minute mark is where many fans who are referred to as the “Metallica family” would raise their lighters, and now cell phones, in the air in order to salute such mastery as the instrumentals are performed live in front of them. Many would also sing along to the extended guitar solo up until Ulrich takes over on drums with ponderous excellence.

Metallica is no stranger from H.P Lovecraft inspirations, as it was seen in Ride the Lighting‘s “The Call of Ktulu.” However, the next piece, “The Thing That Should Not Be,” was inspired by Lovecraft’s story of The Shadow Over Innsmouth. The original was released in 1936 where the protagonist battles monster-like creatures that can be referred to “The Thing That Should Not Be.” The song is known as one of the heaviest and demonic pieces in their career, including the slow introduction and haunting basslines by Burton that leaves chills to listeners thirty years later. Metallica showcased they were more than musicians, writing fantastic music; they were storytellers through the use of lyrics and melody. The ongoing theme of the album continues here where many relate to their personal insanities, including the repetitive phrase of “In madness you dwell.”

The fourth song, which is now a traditional ballad track that was shown in Ride the Lightning’s “Fade To Black,” and carried on after Master of Puppets including …And Justice For All’s “One,” and 1997’s ReLoad track “Unforgiven II.” This particular piece, “Welcome Home (Sanitarium),” flourished to an anthem-esque tune at live stadium shows. It is inspired by Ken Kesey’s novel One Flew Over the Cuckoo’s Nest and the 1975 film directed by Milos Forman, starring Jack Nicholson. It depicts the feeling of helplessness, being trapped and secluded, that leads to the inevitable madness. The lyrics alluded that the only way out of the prison was to kill the guards, “Mutiny in the air, got some death to do.”

As the album shares stories of anger, addiction, monsters, and insanity, it sets a deathly landscape for the next, “Disposable Heroes.” It honors innocent soldiers while clearly being an anti-war song. Brutally telling a story about a young “soldier boy made of clay” who had no control of his fate due to being manipulated by his superiors to go “back to the front!” Metallica has continued with the anti-war theme during the course of their career that includes the 1988 album …And Justice For All. However, “Disposable Heroes” is expressed in such frightening detail that lasts over eight minutes of War, Death, and the harsh line, “why am I dying?” The next, “Leper Messiah,” is the perfect follow-up from “Disposable Heroes” as it continues the manipulation theme from an alleged superior. It describes how blind religious followers are and would do whatever they are told as “Blind devotion came, rotting your brain.”

The bass slowly fades in as it sounds like a light hum with the instrumental of “Orion.” This spacious track was named after the star constellation of “Orion” and Burton had an enormous writing role. It is the second instrumental piece, the follow up from Ride The Lightning’s “Call of Ktulu,” where the band now has a total of four instrumentals including “To Live is to Die” from ….And Justice For All and “Suicide & Redemption” from 2008’s Death Magnetic. What separates “Orion” from any of these is the genius writing and composition that was made by Burton, which is also known as his favorite Metallica song. Thirty years later, many bassists cannot fill Burton’s shoes as he captivates his artistry and legacy. The melody continues to hook the listener as it separates in three different directions between the heavy beginning, the Progressive bass interlude towards the middle, and the vibrant blistering finish.

“Orion” became a tribute to Burton where he tragically died during the European trek of the Master of Puppets tour on September 27th, 1986 in Sweden from a horrific bus crash. This song was performed at his memorial and has been seen over the years in his honor including 1987’s video Cliff ‘Em All, and the 20 year anniversary of the album where Metallica went on tour in 2006, naming it “Orion Music and more.” “Orion” highlights Burton’s talent and will remain timeless and unforgettable as many still mourn his tragic death and wonder where his career would have gone as he is still known as one of the best bassists of all time.

After seven tracks depicting manipulation, the grandiose finale of “Damage Inc.” revengefully hits as it executes evil corporations quite well. It is the most brutal and violent track of the album where a few have debated it is the vilest piece of their career. All elements from the album are mixed together with fast pedaling changes by Ulrich that is incorporated with hard riffs that continue to fuel the listener thirty years later.

Sadly, Master of Puppets was the last album to feature Cliff Burton after his life tragically came to an end. This album has eight solid tracks that beautifully captured the most impressive bass recordings. Burton’s replacements, including Jason Newsted, who left in 2001, and the latest, Robert Trujillo, who joined in 2003, could not replicate Burton’s one-of-a-kind and irreplaceable talent.

Metallica redefined Heavy Metal after the release of Master of Puppets. Moving in with a more challenging direction consisting of multilayered tracks and new techniques, which was later revealed in 1988’s “Blackened,” Master of Puppets was intelligently written and captivated listeners by its flawless musicianship. Many continue to listen to it for hours thirty years later and still discover a new element. It brilliantly showcases the feelings of hopelessness, death, and destruction by the use of monstrous riffs and impeccable arrangements that have influenced Heavy Metal bands for years to come. 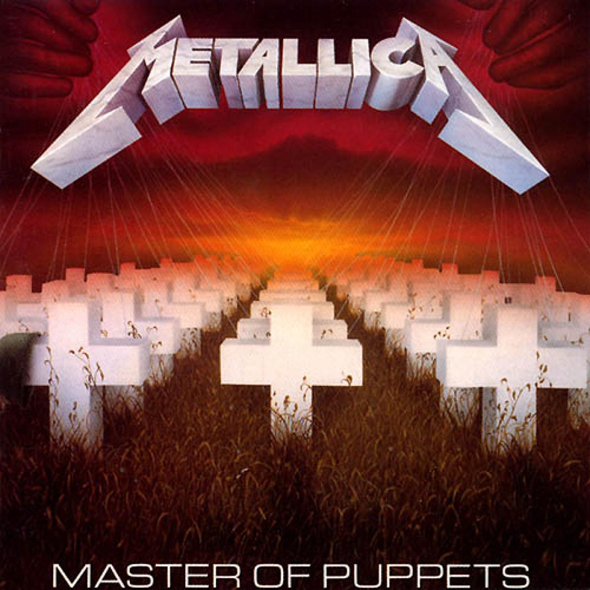 Purchase Master of Puppets on Amazon