Who would have thought that fame could be deadly? Stephen King, that is who. Twenty-five years ago, Misery, the movie based on the 1987 novel by the world famous Horror maestro, was released on November 30, 1990 through Castle Rock Entertainment. Directed and produced by Rob Reiner (Stand By Me 1986, When Harry Met Sally… 1989), Stephen King’s Psychological Horror stars Kathy Bates (American Horror Story TV series, Fried Green Tomatoes 1991) and James Caan (The Godfather 1972, Las Vegas TV series). Reiner got his Princess Bride (1987) crew back together for Misery, calling the novel’s author, William Goldman, to write the screenplay, and producer Andrew Scheinman to help bring this twisted Horror story to life. He also dialed up former Saturday Night Live! alum Marc Shaiman to compose the score (When Harry Met Sally… 1989, Hairspray 2007) for this Academy Award winning film. 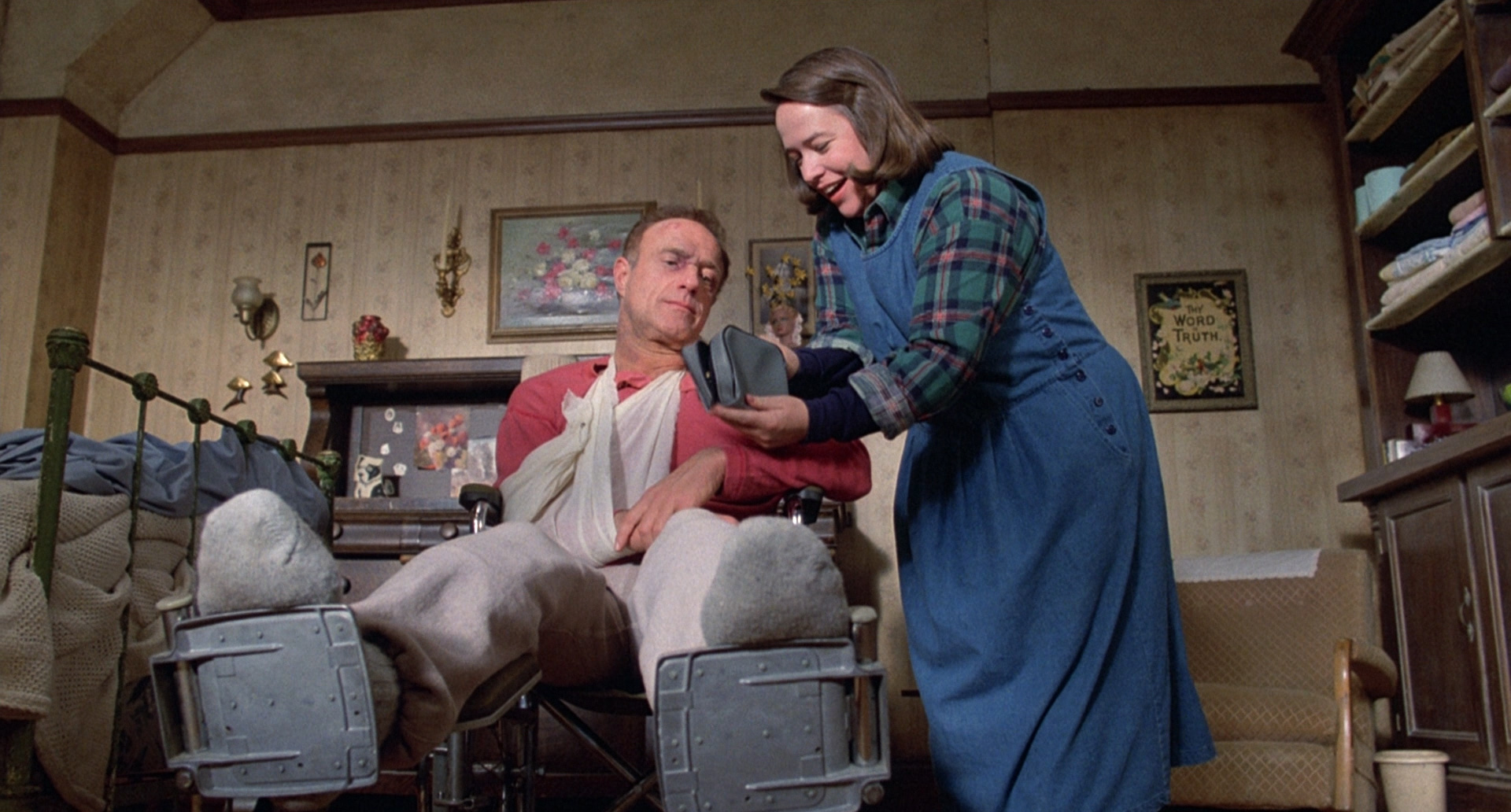 The only reason the film even made it to the big screen was because of Rob Reiner. Stephen King was initially reluctant to sell the movie rights, afraid another one of his stories would be flubbed up on the screen. After the gentle giant directed Stand By Me, a touching, heartbreaking coming-of-age film based on King’s novella The Body, the author realized only one person was suitable for Misery, a story close to his heart, as he later admitted that Annie Wilkes was based on his own personal struggles with addiction and the hopeless, helpless, agonizing situation he was in at that stage in his life, along with the nurse Genene Jones, a woman believed to have killed as many as fifty children under her care during her two year career. According to Reiner, the original story ended with Annie killing Paul and feeding him to her pet pig, Misery, then tanning his skin to use to bind the book he wrote while in her care, retitling it to The Annie Wilkes 1st Edition. Since King survived his addiction ordeal, apparently so did Paul. The author enjoyed the film so much, especially Kathy Bates as Annie, that he later wrote Dolores Claiborne with Bates in mind for the title character. She would later be cast in the part for the film version of the novel. He even changed the script for The Stand (1994), turning the male character of Ray Flowers into the female Rae Flowers, just to give Bates the part.

Shot in Nevada, Los Angeles, and New York City, the story begins with famed novelist Paul Sheldon (Caan) getting caught in a blizzard while driving through Silver Creek, Colorado on his way home to the Big Apple. He has finally finished writing the story of his most famous character, the Jane Austen-esque Misery Chastain, and is thinking about his next, more serious novel when, distracted, he goes off the road in an accident that leaves him unconscious. When he wakes up, he finds himself in a warm bed and being cared for by his number one fan, nurse Annie Wilkes. As she nurses him through the pain of his shattered legs and dislocated shoulder, Paul thanks her by letting her read his unpublished, non-Misery Chastain manuscript. She, of course, hates it because it is not about Misery. On a trip to town, Annie buys the newest Misery novel and reads it excitedly, but once she gets to the end and realizes that Paul has killed off her beloved character, Annie flies into a rage, nearly braining Paul with a wooden table. She admits that she lied about calling the authorities about Paul’s accident and that no one actually knows where he is. 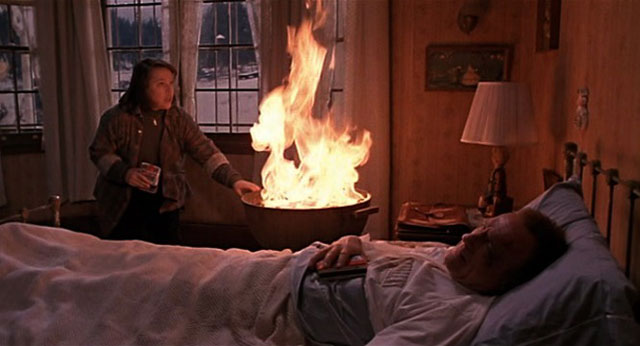 As the wheelchair bound Paul heals, Annie forces him to write a new story bringing Misery back from the dead. Afraid for his life, Paul complies, but as he strengthens, he figures a way out of the room when his nursemaid leaves for short trips to town, finding a scrapbook with newspaper clippings telling the story of Annie’s arrest, trial, and eventual acquittal in the deaths of several infants in her care. Eerily, he sees that she even quoted lines from his Misery books during her trial. Even though he makes it back to the bed before Annie gets home, she figures out that he had gotten out of his room and breaks both of his ankles with a sledgehammer as punishment and to keep him bedridden. Meanwhile, local Sheriff Buster (Richard Farnsworth) is investigating the author’s disappearance and follows the clues to Annie’s house. He finds Paul hidden in the basement but is fatally shot by Annie before he can tell anyone. Realizing that this is the end for her, Annie tells Paul that they both must die, and he agrees, but convinces her to let him finish Misery’s story of rebirth. When she is not looking, he hides a can of lighter fluid in his pocket.

Once the manuscript is finished, Paul tells Annie that he always celebrates a finished work with a cigarette and a glass of champagne. When he inists that she join him in the celebratory glass of bubbly, she leaves the room to get herself some and he soaks the manuscript in lighter fluid. Using the lighter meant for his cigarette, Paul waits for Annie to come back in the room before lighting the fresh pages on fire. Annie freaks out and they fight, with Paul eventually getting the upper hand, killing Annie. A year and a half later, Paul meets with his publicist over dinner about his newest, non-Misery novel and tells him about the positive buzz it is receiving, but Paul does not care. As they sit there, he hallcinates the waitress as Annie Wilkes, and when she tells him she is his number one fan, he smiles grudgingly and responds, “That’s very sweet of you.”

In 1991, Kathy Bates became the first woman ever to win an Oscar for Best Actress in a Leading Role in a Horror movie for her role as Annie in Misery. She also won a Golden Globe for the role that same year. Tying in American Horror Story, Jessica Lange, a four year alum of the series, was at one time up for the role of Annie Wilkes. After his miserable experience in Kubrick’s The Shining (1980), Jack Nicholson refused to be a part of another Stephen King feature, so he turned down the role for Paul Sheldon, leaving it for James Caan. Caan had previously turned down Nicholson’s role in One Flew Over the Cuckoo’s Nest (1975), in which he also is the victim of a psychotic nurse, who also won an Oscar for her role. 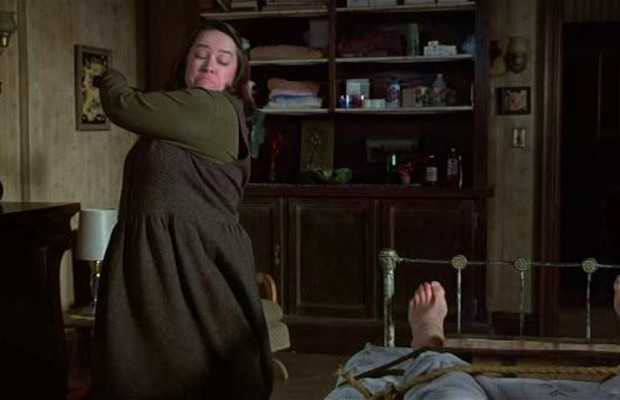 The American Film Institute has also recognized Misery, nominating the film for their 100 Years… 100 Thrills list and Annie’s famous line, “I am your number one fan,” on the 100 Years… 100 Movie Quotes list. Annie herself did make the 100 Years… 100 Heroes & Villains list coming in at #7 on the villains side. The film stands firm at 89% fresh on Rotten Tomatoes while the late Roger Ebert stated, “It is a good story, a natural, and it grabs us.” In his book Stephen King Goes to the Movies, the author ranks Misery in his list of top ten favorite movie adaptions. Audiences agreed as Misery finished its theatrical run with a sixty-one million dollar box office take, tripling its budget.

A play was later written by Goldman that premiered in 2012 at Bucks County Playhouse in New Hope, Pennsylvania, and although Julia Roberts was asked to play Annie Wilkes on the stage, King vetoed the idea because Annie is “a brawny woman who can sling a guy around, not a pixie.” Surprisingly, the thin Laurie Metcalf (Roseanne TV series) was later cast as Paul Sheldon’s antagonist with Bruce Willis as the crippled author. Although Willis did not get very high marks for his performance, Metcalf was given high accolades with talk of a Tony nod.

Even after twenty-five years, Stephen King’s story of obsessive love, isolation, helplessness, and torture still twitches the nerves and turns the stomachs of Horror fans today. No amount of special effects or buckets of blood can compete with great storytelling, and a great, albeit insane, story is what watchers get with Misery. 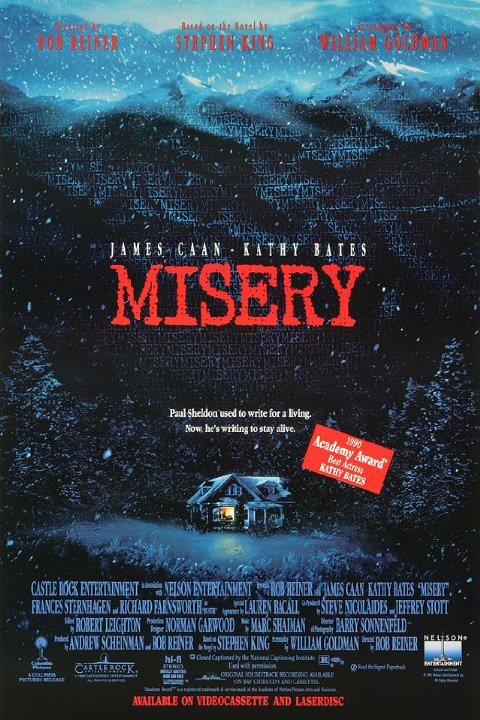 Purchase Misery on DVD on Amazon