Ah. The days of being a teenager were exhilarating, fun, and free: no job nor bills to hold one back from having a great time with friends; where being cool involved sleeping in and keeping up with the latest trends and music. The other things that came with being a teenager were talking back and being extremely bratty to the very people—their parents!—who had brought said teenagers into the world from when they were itty, bitty babies. Well, maybe this act of nasty adolescence and disrespect will change once one of these teenie-boppers turns on the VCR after injecting a copy of Mom and Dad, a film hitting theaters, VOD, and Digital HD through Momentum Pictures on Friday, January 19, 2018. 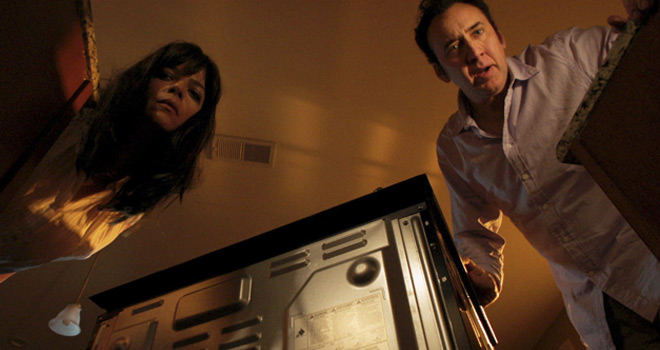 If any moviegoer out there reading this had once seen the 2006 film Crank, or its sequel 2009’s Crank: High Voltage, will surely be pleasantly surprised with Mom and Dad, for the person responsible for the writing and directing duties is none other than Brian Taylor (Ghost Rider: Spirit Of Vengeance 2011, Gamer 2009). Known for his start as an amazing Cinematographer, Taylor takes all the skills used for his Action films—also as a screenwriter, and director—and enforces them into the creation of Mom and Dad, which will soon be entered into the race for Best Picture of the year. Now, as much as the last statement may seem a bit far-fetched for most to believe, seeing the film will likely change the mind of a skeptic.

The plot of Mom and Dad is quite simple, but reading a description such as this will do the film no justice, whatsoever. Basically, what occurs in the film is a type of sickness, or hysteria, that takes over every parent in the world, where the only thing going through their minds is killing their very own children. Such an occurrence takes over parents Brent (Nicolas Cage: The Family Man 2000, Adaptation 2002) and Kendall (Selma Blair: Hellboy 2004, In Their Skin 2012) Ryan, both of whom seem to be going through their own bouts of midlife crisis, fears of getting older, and losing touch with their kids.

When all hell breaks loose at a high school, which involves some of the creepiest imagery in quite some time, Brent and Kendall’s teenage daughter, Carly (Anne Winters: Sand Castles 2014, The Tribe 2016), realizes there is something amiss, and seriously screwed up with all the old cronies, and will soon need to venture home to help her baby brother, Josh (Zachary Arthur: Don’t Come Back From The Moon 2017, The 5th Wave 2016), survive against this unknown sickness taking over moms and dads all over the world. 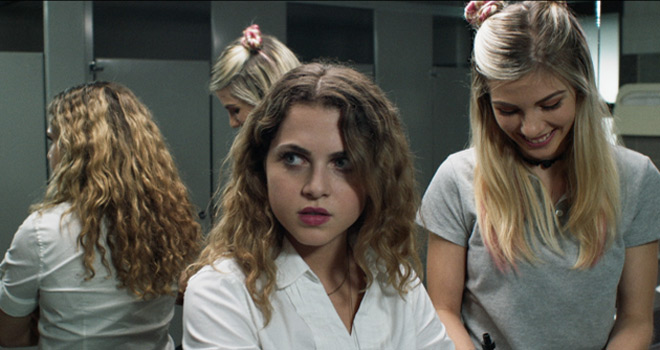 The entire film is perfectly put together at the crafty hands of Director Brian Taylor; and although this may be his one and only Horror film he will ever make, Taylor proves he can cause one to grip tightly against a pillow and fear what is happening on the screen, as if it were all happening in real life. The cinematography is what helps sell every scene, which captures every action, every heartfelt moment, and every horrific scenario equally and effectively.

Nothing is left out of any scene. It will cause one to be proud for the persons involved in making Mom and Dad. Without having enough word-count to mention everyone, much kudos goes out to the entire Camera Crew for creating such a hysteria to occur over the viewer. Even more shout-out would go out to Editors Rose Corr, and Fernando Villena, for their sharp eye, and virtual knives, for putting all of Brian Taylor’s imagination onto the big screen.

There is a lot going on during Mom and Dad‘s short running-time that adds so much more to this Horror film than anyone could ever imagine. Taylor has text-messages splaying the screen all at the right moments; he has scenes that will jump to story-building flashbacks pertaining to the characters Cage and Blair; and during the “gore” scenes, Taylor colorfully but respectively films each kill (yes, involving kids) without venturing into the territory of tasteless exploitation. Taylor also hired first-time Actor Robert T. Cunningham to portray Damon Hall, the boyfriend to Carly, who keeps to help her and himself survive against the homicidal parents ravaging the town.

Although Cunningham does have a few hammy scenes, he increasingly betters his acting chops as the movie moves along. It would be funny to think that Taylor was breaking Cunningham into the world of acting while putting him through the toughest parts of the entire movie! Seriously—this kid gets slapped, pummeled, and thrown around like a ragdoll, so many times, in fact, he deserves to be allowed into the gang (Actor’s Guild, really). Cunningham will remind many of what Bruce Campbell had gone through in 1987’s Evil Dead II, and will influence many others to want to do the same. 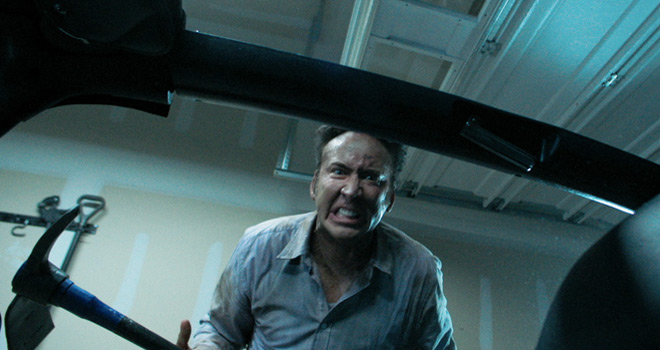 What needs to be mentioned is how much greatness and fun comes out of the acting skills of Cage and Blair. Their portrayal of aging parents-turned-homicidal-maniacs is a tour de force from both actors. There is a part involving the building of a pool table, and a conversation between the titular mom and dad, that will not only floor the viewer, and awe the audience, but also cause a tear to slowly drip from an eye at the end result of the scene. Cage and Blair are absolutely fantastic together.

Mom and Dad is an exciting Action yarn disguised as an exciting and frightening Horror film. It is surreal, emotionally charged, and is a fantastic watch. The running-time may be short, but gosh darn it, there is so much happening, it will seem like three or four movies are being seen back to back. Taylor proves his worth once more as an exciting director, and as a screenwriter, whose audience will drool until his next film is made. That is why CrypticRock gives Mom and Dad 5 out of 5 stars. 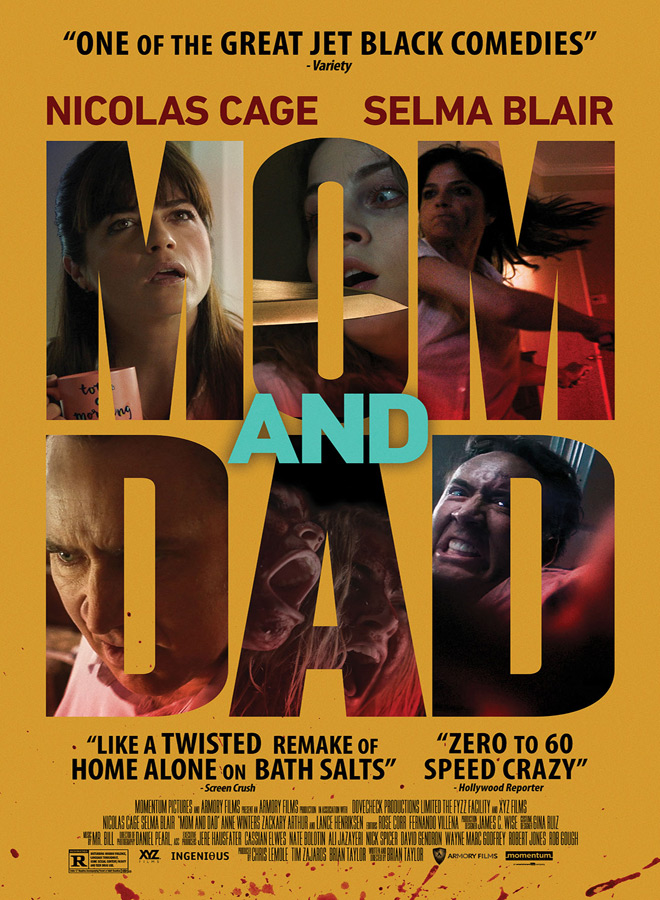