Monaco was not Peter Hook’s first side project, but the music of this outfit was what made the iconic bass player’s distinctive rolling, tubular, and trebly bass styling recognizable even by casual Alternative Rock fans.

Formed in 1995, in Manchester, England, during the inactivity of New Order and after the dissolution of Hook’s first-ever foray outside of his now erstwhile band, Monaco—despite its promising prospect—got to release only two studio albums, 1997’s Music for Pleasure and 2000’s self-titled follow-up. Now, Monaco’s debut oeuvre is celebrating its twentieth anniversary. In spite of the currently high-riding activities of his latest band, Peter Hook & the Light, it remains to be something that Hook is yet to outdo.

Released on June 9, 1997, on Polydor Records, Music for Pleasure may be regarded as the pinnacle of Hook’s songwriting prowess outside of his former bands, Joy Division and New Order; but, of course, not discounting the equally important contributions of Hook’s effective co-songwriter in Monaco, David Potts (drums, guitar, keyboards, vocals, bass). It also inadvertently gave away a hint of which New Order songs were borne primarily of Hook’s ideas or, at the least, his preferred musical direction, considering the almost purely Electronic Dance Music excursion of his New Order bandmates: Bernard Sumner, in his own side project in the same period; as well as that of The Other Two, Stephen Morris and Gillian Gilbert.

Music for Pleasure opens with the ebullient and celebratory “What Do You Want from Me?,” whose hook-filled bass intro and lush “synthrumental” interlude were enough to let an unsuspecting but initiated listener know that what he was listening to was something that had the stamp of New Order’s original bass player, plus the latter’s Ian Curtis–inspired singing voice at that; and long after the opening track had ended, the infectious “shalala” would have still been ringing in the listener’s head to his heart’s delight. Maintaining the energy of the album, the ensuing ultramelodic “Shine” glows and flows brilliantly, with its high-octane bassline and drumbeat concealing the pensiveness of its lyrics.

The dance-floor-worthy track “Sweet Lips” was a change of mood and style, taking the cue from New Order’s more EDM-oriented works, the likes of “Blue Monday,” “True Faith,” and “The Perfect Kiss.” Yet another change of groove and pace followed in the form of “Buzz Gum,” which befitted the league of edgier, guitar-oriented Britpop classics such as Oasis’ “Don’t Look Back in Anger,” Suede’s “Beautiful Ones,” and The Boo Radleys’ “Wake Up Boo!” Then there was the album’s slow, somber, string-laden, and aptly-titled ballad, “Blue.”

“Junk” returned the tapping feet of the listener to the dancefloor; the initiated could easily imagine the influence on Hook of the Dance/Rave/Post-Punk combo culture that germinated at the now legendary nightclub The Haçienda, in Manchester, of which he and the rest of the original New Order members primarily owned. Still in the same club, but having moved into a dark-lit corner of it, “Billy Bones” swung and swayed in a slightly hypnotic Trip-Hop ecstasy; it did not veer so far away from similar filmic trips taken by Garbage (“Stupid Girl”) and Portishead (“Sour Times”).

Hook’s trademark bass styling shines again in the ensuing sunny, upbeat “Happy Jack:” and the less rhythmic but much cooler and more relaxed “Tender.” The most-favorite track of many Hook followers from the album, “Under the Stars” then explodes deliriously with angular guitar strums, four-on-the-floor kicks, cascading bass rolls, and catchy choruses; it surely has sent many a longtime fan to New Order’s youthful, sprightly beginnings—during the time of “Dreams Never End,” “Temptation,” and “Love Vigilantes.” Finally, Music for Pleasure ends with the rich, cinematic allure of the instrumental track “Sedona”—such an apt closer.

Music for Pleasure may have been eclipsed in 1997 by the respective releases that year of many of Monaco’s more high-profile, Britpop-oriented contemporaries, such as The Verve’s Urban Hymns, Oasis’ Be Here Now, Radiohead’s OK Computer, and Blur’s self-titled; but Hook’s collaborative work with Potts had a unique and distinct ’80s New Wave Pop and Post-Punk throwback quality that made the duo’s songs age potently like vintage Star Wars action figures, capturing the fancy and flamboyant taste of that decade’s New Romantic connoisseurs.

Two decades had passed, but Monaco’s firstborn continues to be a landmark album that many New Wave or Post-Punk revivalists aspire to emulate or, at the least, be influenced by. Now, pleasure yourself. Give Music for Pleasure its rightful anniversary recognition by rediscovering its sonic beauty. Find your copy and play it now. 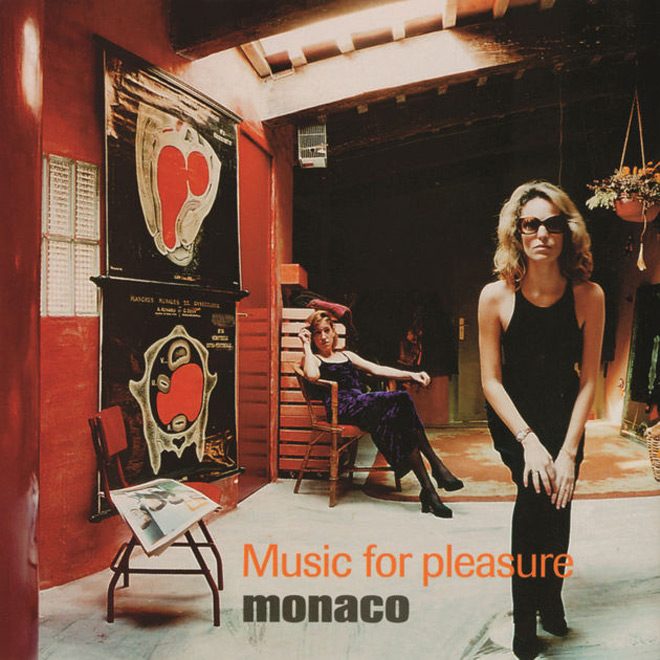