Year after year, spring is a time for renewal, warmer weather, but most of all, Rock-n-Roll. Marking the start of the outdoor concert season, Rock/Metal festivals are a modern tradition in the North American region, and one of the biggest is Monster Energy Carolina Rebellion. Set to return to the great state of North Carolina for the seventh straight year, the event has seen some of Rock’s best bands pass through since 2011 including Avenged Sevenfold, Shinedown, Alice in Chains, Marilyn Manson, and even Lynyrd Skynyrd.

Scheduled for May 5th through 7th, out at Rock City Campgrounds at Charlotte Motor Speedway in Concord, North Carolina, 2017’s lineup could be one of the best to date. Drawing over 90,000 fans to the event in 2016, once the 2017 Carolina Rebellion announcement in December, fans were eagers to buy tickets early. Now two months away tickets are still available, but are selling out fast.

Check out the length list of bands scheduled to perform below:

A lineup to salivate over, there is something for any type of Rock or Metal fan amidst the three days of fun. Be sure to pick up passes now before it is too late. 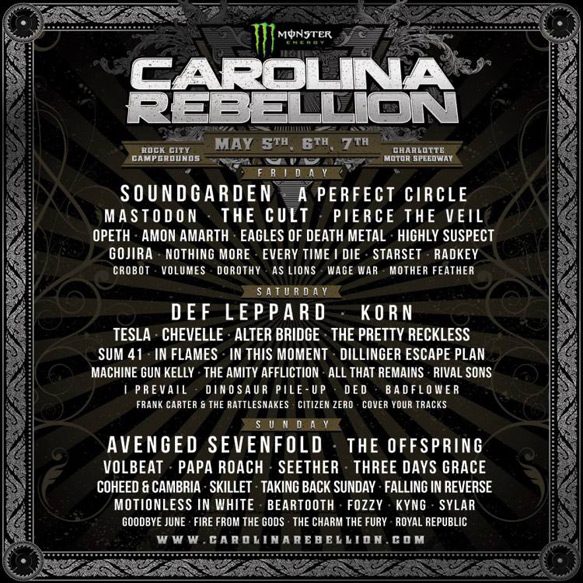 Long Live Rock… Celebrate the Chaos (Documentary Review) Monster Magnet – A Better Dystopia (Album Review)
Like the in-depth, diverse coverage of Cryptic Rock? Help us in support to keep the magazine going strong for years to come with a small donation.