Released June 7, 2016 via RLJ Entertainment, Monsterland is an anthology flick that tells the tales of some outrageously unusual creatures. Not to be confused with the 2008 and 2009 films of the same title, when putting this Creature Feature together, Dread Central did not settle for Zombies, Witches, Vampires, Werewolves, or Ghosts. Instead, the Horror webzine went a step further, opting for killer rats, mutant jellyfish, mind-controlling worms and even a breastfeeding dad. No, that is not a typo.

The slightly silly, but relatable wraparound story was written and directed by John Skipp and Andrew Kasch (Never Sleep Again: The Elm Street Legacy 2010, Tales of Halloween 2015). A man wakes up in the middle of a monster apocalypse, and rather than run screaming to the nearest fallout shelter, decides to take in a movie instead. His trip to the theater involves a baseball bat and some fancy footwork, but once he arrives, he gets himself some popcorn and settles down for some sanguinary monster shorts, undeterred by the tentacled creature in the projection booth and some mysterious green slime dripping from the ceiling. 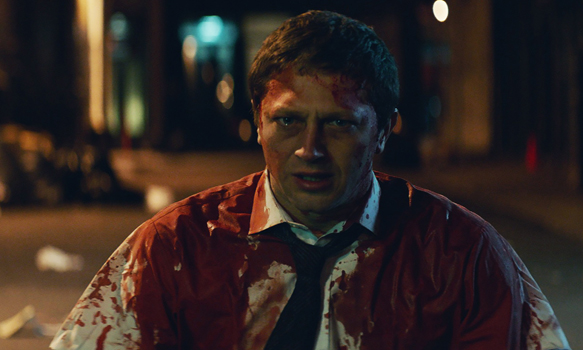 Next, brothers Luke and Peter McCoubrey (Grey Matter 2011, Therefore I Am 2015) teamed up to create Grey Matter, a delightful, yet disgusting short starring Ebon Moss-Bachrach (The Royal Tenenbaums 2001, Mona Lisa Smile 2003) and Lucy Walters (Here Alone 2016, Powers TV series). Simon (Moss-Bachrach) wakes up in the middle of the street, covered in blood and sporting a baseball-sized hole in the back of his skull. Not wanting to be late, Simon throws on a hat and goes to work. When he spots the beautiful Emily (Walters), a tiny voice inside his head encourages Simon to ask her out.

Even after Simon realizes that the scratchy interior voice belongs to a fat, grey maggot that lives in his newly formed head hole, he continues to take advice from it, eventually landing a date with Emily. This was a funny, disgusting short, and one that needs to be fleshed out in more depth. One can only hope that the McCoubrey brothers expand on this story, giving audiences more tales from this Chinese food-eating parasite.

Curiosity Kills was both written and directed by Sander Maran (Rubik’s Cube Terror 2012, Turbosledge! 2013) and stars Peter Maran (Turbosledge! 2013, Framed By A Kid: LOLLIPOP MASSACRE 2013), Rita Rätsepp (Bande 1986, Võõra Nime All 1986), and Jaak Valdre (Täitsa Lõpp 2011). A young boy (Maran), left to his own devices, gets a hold of his dad’s mid-century radioactive chemistry set and decides to feed a noxious chemical concoction to his pet rat. Like all things exposed to radiation, the rat gains superpowers and a pissed-off attitude. Fur and blood fly as the glowing vermin attacks everything in the house. This short was without dialogue, so the actors had to convey their feelings with expressions only. This made for over the top performances all around, much like the silent films of yesteryear.

Moving on, written and directed by Erik Gardner (The Mangler Reborn 2005, Blue Hole 2012), Hag was by far the creepiest segment included in Monsterland. Hag tells the story of married couple Scott (Drew Wicks: Snakes On a Plane 2006, Transformers: Age of Extinction 2014) and Marie (Megan Duffy: Maniac 2012, Holidays 2016) as they try to figure out the reason for Marie’s sleepwalking and Scott’s sleep paralysis. What could possibly be causing this? This short was great – the tension was tight from beginning to end and the reveal at the end was jaw-dropping. The idea that the sleep paralysis made it impossible for Scott to defend himself made it all the scarier. Watch for the cameos from John Franklin (Isaac from Children of the Corn 1984) and Eileen Dietz (Pazuzu’s face from The Exorcist 1973). 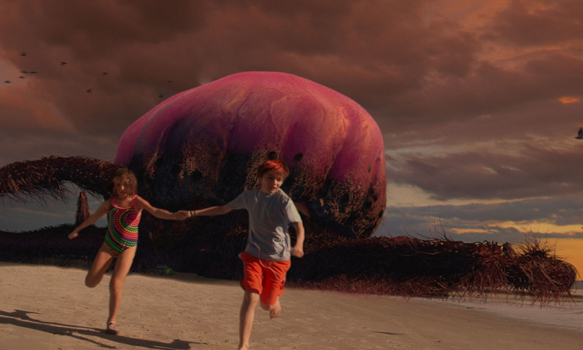 Frank Sudol’s (South Park: Bigger, Longer and Uncut 1999, Tales of the Dim 2015) animated short, Monster Man, tells the newest adventures of the walker-sporting old man named Fred from City of Rott (2006). This time, the octogenarian is called on to dispatch the monster living in his neighbor’s shed. Despite the caller’s doubts and the old man’s increasing senility, the Monster Man kicks that critter’s ass. All is well… at least until mama monster shows up.

This next short, entitled House Call, was one of the best acted and most cringe-worthy tale of the bunch. Directed by Graham Denman (The Haunting of Whaley House 2012, Blood Brothers 2015) and written by Dick Grunert (Adventure Time TV series, The Boondocks TV series), House Call stars Insidious’ Ruben Pla as a suicidal dentist who gets a visit by an agitated young man (Sean Keller: Giallo 2009, Rage 2014) who insists that he will soon turn into a vampire and begs the doctor to pull his teeth out before he can bite anyone. Between the closeup of the wrench tightening on the tooth and the tearing, cracking sounds of the roots being ripped out of the guy’s head, this short has everything a horror fan could ever want, despite the lack of gore. Also, between Keller, Pla, and Grunert, the characters were excellently intense. A slight hitch in voice or swipe across the mouth said more about these men than any dialogue ever could.

Back in the movie theater, the happy-go-lucky moviegoer notices that something with an abundance of tentacles is messing with the projector. After fighting it off, he accidentally eats a glob of goo from the creature that fell into his popcorn. Apparently, this goo has hallucinogenic properties, and the man is suddenly sent on a surreal, trippy jaunt through space and time in a short called Happy Memories. There is no discernable plot – the short is more of an excuse to shove together a bunch of head-scratching images.

However, the use of multimedia – everything from puppetry to stop motion animation – to create the short was nothing short of spectacular. First time Director Jack Fields gives this as an explanation: “A cupcake is born from a monster. It is exploited and tortured by a series of terrifying beings. It is torn from the prenatal pastry world, experimented on by 12-dimensional Mathuloxes, and transformed into a new being, perpetuating the cycle of pain and wonder.” Does that help?

Stay At Home Dad is by far the best short in Monsterland. It is original, funny and Lovecraftian all at the same time. The second short in this film directed by Kasch and Skipp, Stay At Home Dad is a multilayered story that touches on current society’s obsession with perfect parenting as well as the long held notion that science could very well be the end of life on Earth. New mom Brenda (Alisha Seaton: Dark Reality 2006, The Fourth Kind 2009) stresses over working outside the home and breastfeeding her baby daughter – that is, until Steven (Matthew Currie Holmes: The Fog 2005, Wrong Turn 2 2007) offers himself up as a breastfeeding surrogate. 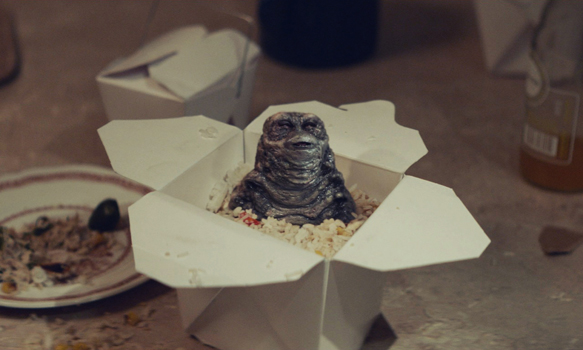 He has heard about a new treatment that will give him luscious, milk-filled breasts, freeing his wife up to go back to work. Special effects artist Marc Shostrom (Evil Dead 2 1987, Nightmare on Elm Street 3: Dream Warriors 1987) and his team did a superb job creating huge, leaky, natural looking breasts relatable to any breastfeeding mother. The male mammaries are not even the tip of the iceberg in this short – it is the jaw-dropping twist that really makes this tale stand out. Watch for House Call’s Sean Keller in a cameo as the jogger.

The last tale in the Monsterland anthology is called Hellyfish and gives audiences an updated spin on the “science is going to kill us” idea from the ‘50s and ‘60s. Off the coast of Georgia, a lost, leaking nuclear bomb turns all the East coast jellyfish into pissed off, purple people eaters with super strength and the ability to walk on land. The short was written by Kate Fitzpatrick (Color Games 2011, The Visions of Dylan Bradley 2011) and was directed by Patrick Longstreth (Grandma 2015, Adam Ruins Everything TV series) and newcomer Robert McLean. The CGI was ridiculously fun, making Hellyfish a colorful, hilarious ride.

Monsterland wraps up as the movie-loving apocalypse survivor notices a stream of green goo dripping onto his shoulder from above. Needless to say, things do not end well for him.

Overall, Monsterland is a gory, gooey, graphic flick sure to be enjoyed by Horror lovers everywhere. Anthologies are usually pretty hit or miss, but Monsterland offers up mostly hits in its 109-minute run. Although the movie tends to run more toward light-hearted, tongue-in-cheek fare, fans of Horror will recognize the shoutouts to the genre and relate to this offering of the silly side of scary. CrypticRock gives Monsterland 4.5 out of 5 stars. 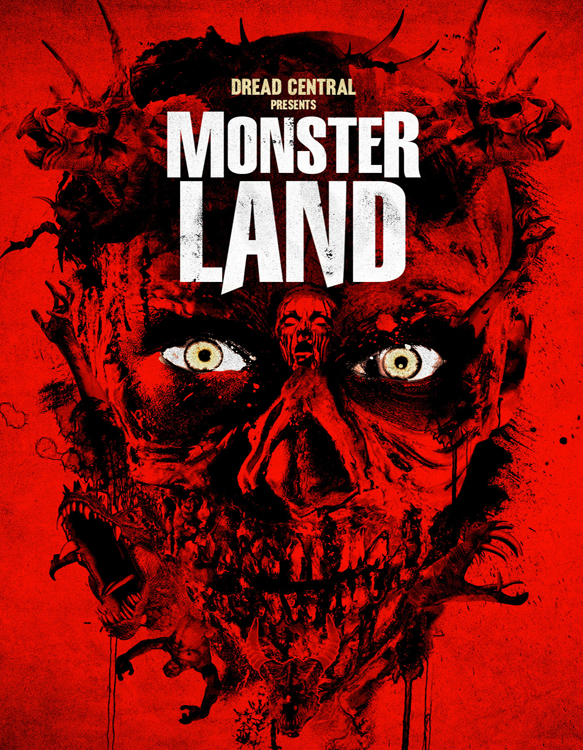