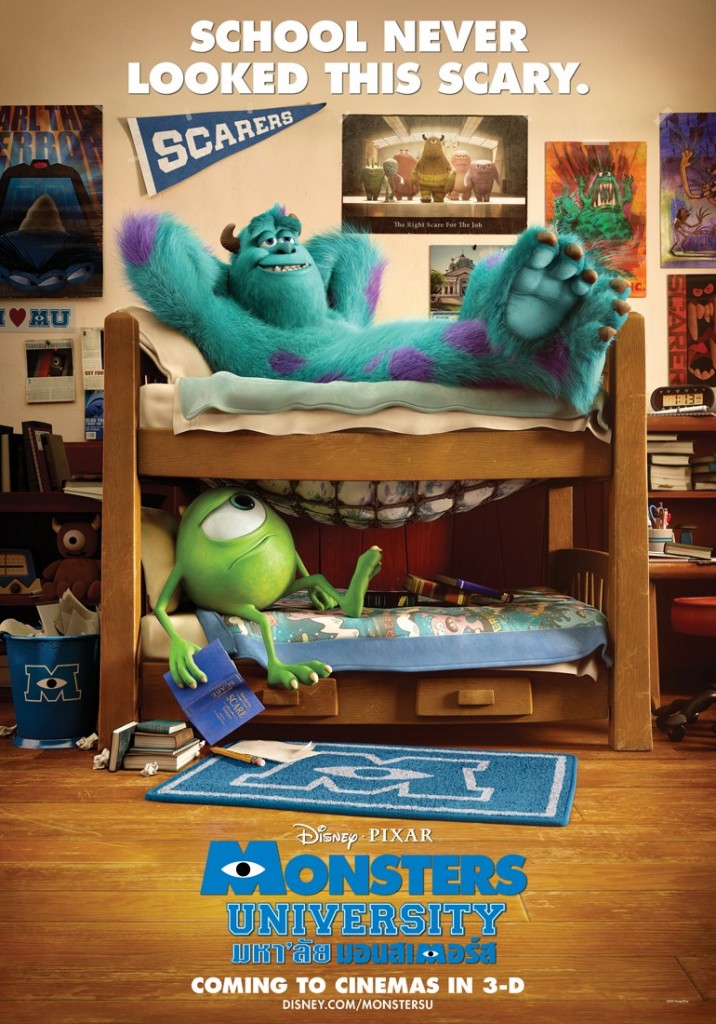 In 2001 Disney Pixar captivated audiences of all ages with Monsters Inc. The film was inventive, funny, visually stunning, and entertaining. In 2012 Disney decided to re-release Monsters Inc in 3D. This decision appears to be clearly made to refresh the memories of audiences for a new film. Over a decade later they bring us the prequel in Monsters University.

Often prequels fall short from the original and are not nearly as entertaining. That is definitely not the case with Monsters University. The film starts off giving us the back story of our favorite green ball shaped one eyed monster “Mike” Wazowski (voice by Billy Crystal). It’s clear that from a little monster Mike had dreams far bigger than his actual size. Due to Mike’s guts and determination he wants to defy all odds and become a “scarer”. Fast forward a decade or so and Mike is off to Monsters University to learn the art of scaring. Bringing back all the key characters from Monsters Inc. we find Mike’s college roommate to be Randall Boggs (voice by Steve Buscemi), our goofy multi-legged lizard-shaped monster with a chameleon-like ability villain. Much like many young underdogs in college Mike is not received very well and lead to believe he doesn’t belong. In the midst of Mike’s adversity he crosses paths with his future best friend James P. “Sulley” Sullivan (voice John Goodman) our favorite big blue lovable monster. Sulley and Mike don’t hit it off so well at first and due to unfortunate circumstances get expelled from Monsters University. Determined to get back into the scare program they team up with a bunch of less than scary monsters for the fraternity Scare Games. Taking on a Revenge Of The Nerds (1984) like quality of a bunch of misfits ready to prove the world wrong and beat the big bad popular kids. Mike’s determination and drive helps his new group of friends realize their potential. Riding high on confidence ignited by team work and friendship the group excels in the Scare Games. From this point in the film there are a few twist and turns  but keeping the story fresh. In the end we are left with a complete well written back story of how Mike and Sulley became best friends and partners at Monsters Inc.

Billy Crystal, John Goodman and Steve Buscemi performance is top notch bringing the characters of Mike, Sully, and Randall back to life. The chemistry between Billy Crystal and John Goodman gives a deeper look into the bond between the friendship of Mike and Sully. Filled with clever jokes, inventive story line, and great acting Monsters University is a worthy addition to the series. Wait until the end of the film after the credits for a fun little clip you will appreciate. Cryptic Rock give this movie 5 out of 5 stars.