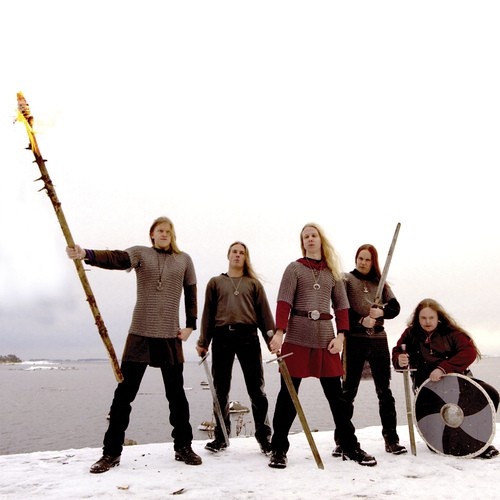 Encased in a winter like no other in recent memory, February of 2015 will be remembered not only as the month the snow overwhelmed the northeastern United States, but as the ten year anniversary of the release of one of the world’s most important folk metal albums to date. Verisäkeet, or ‘Blood Verses’ in their native Finnish tongue, was the fourth studio album by the band Moonsorrow. Released on February 23rd, 2005 via the prolific Spinefarm Records, the album was recorded in the famous Tico Tico Studios in Kemi, Finland.

Moonsorrow had garnered worldwide media attention with their previous album, Kivenkantaja (2003). With the folk metal explosion gaining steam and on the cusp of reaching its height of commercial success, it was anyone’s guess in which direction the Finnish troupe would take their sound. Cousins Ville and Henri Sorvali (bass guitar/vocals/lyrics and rhythm guitars/songwriting, respectively) had been building a foundation of folk metal, but one that went against the grain – and would continue to go against the grain – of some of the genre’s more popular acts, namely Korpiklaani, Turisas, and Finntroll. (For a time, Henri Sorvali was Finntroll’s vocalist, going under the stage name ‘Trollhorn’).

Despite having a propensity for the mouth harp and certain other sonic folk metal affectations, Moonsorrow was displaying a penchant for long, winding musical passages soaked in keyboards and distortion. Occasional robust clean vocal sections could be heard, but for the most part Ville Sorvali’s decidedly black metal shrieking screams made up most of the vocal attack with which the band chose to work. This was quite the opposite of what was chic at the growing folk metal party, and something Moonsorrow took to new heights on Verisäkeet.

While their contemporaries may have been writing shorter, catchier campfire drinking anthems, Verisäkeet emerged with a track-listing of only five songs, but boasted a running time of seventy minutes and thirty-seven seconds. Only the closing song, “Kaiku,” came in at under ten minutes in length. Lyricist Ville Sorvali, who reveled in telling tales of Finnish mythology and history, combined with cousin Henri and the rest of the band (Mitja Harvilahti – guitars / Marko Tarvonen – drums / Markus Euren – keybaords) to take the passion, blood, and history of their nation’s storied past and widen the playing field. The sounds of crackling fires and the forlorn calls of lonesome birds heralded a sound far more cinematic and sprawling in scope, where the songs would climb to multiple crescendos. In this way the music mirrored the very stories the band was conveying. Ville Sorvali’s inhuman vocals, sung entirely in Finnish, would escape anyone of their fan base located outside the land of a thousand lakes, but the riveting, epic nature of the music on Verisäkeet ensured that fans from Japan to Jersey would feel the journey being undertaken.

The percussive, marching grandeur of opening song “Karhukynsi” (or Bear Claw) is piloted by a very folk-like keyboard riff, and then after 8 and a half minutes has elapsed, gives way to a stunning blast beat. The transition sneaks up on the listener, announced by a vocal call to arms. The song then rages along with a black metal intensity. This kind of in-song flexibility is what Moonsorrow was starting to become all about. On Verisäkeet, they mastered the technique. How fine the line between being epic and simply boring the listener. Moonsorrow had the chops and the dynamics to avoid these pitfalls outright. ‘Haaska,’ (or Carrion), comes on with the sound of post-war fire and the cries of scavenging birds. It is rife with pure heavy metal might; deliberately paced but interspersed with a fine helping of folk instrumentation and a dash of Tales From the Thousand Lakes -era Amorphis thrown in for good measure. Third song “Pimeä” (or Dark) clocks in at over fourteen minutes in length, capping an opening trio of songs each reaching the same length. For comparison that is three straight “Rime of the Ancient Mariner’s” on one album. Crafty guitar solos, epic clean choral arrangements and folk metal breakdowns compliment the song so well, the time flies by like the wind on a seafarer’s face. Do Moonsorrow offer a respite from the lengthy songs on track four? They do not. In fact, they up the ante. “Jotunheim,” clocks in at over nineteen minutes, setting a grim and lamenting mood with its calling loon-like bird sounds and plucked acoustic guitar introduction. Here the listener’s attention is being completely sucked into the world the band has created with their sound.  And after all the blasting, raging fire the song amplifies, when the keys have quieted and the riffs have finished, the song ebbs away in its final minutes with the sound of fire and the calls of birds as they look down upon the heaps of dead. Then comes the far off lamentation of flutes and the most mournful accordion you’ve ever heard, which leads us to that final song, “Kaiku,” which unlike its predecessors is an ambient journey of clean choral voices and further folk instrumentation.

Ten years on, Verisäkeet still sounds amazing. Its footprint on the muddy battlefield of epic Folk Metal is arguably the defining one, as few who have set foot on similar ground have managed to balance the folk elements with the Black Metal elements as fully and theatrically as Moonsorrow. Verisäkeet was groundbreaking in this regard, and as a Pagan Metal anthem should never be overlooked.