With the world in its usual daily upheaval of putrid chaos, many bands continue to channel the craziness, directing it towards meaningful music. That mind, Morbid Angel are back with a well-structured album full of toxic energy re-vamped into the most appealing serving. Their first studio album in six long years, Kingdoms Disdained hit the masses on Friday, December 1, 2017 through Silver Lining Music.

One of the most influential Death Metal bands to surface out of the Florida scene in the early eighties, Morbid Angel has shown nothing stands in their way, and Kingdoms Disdained is no different. Their ninth overall studio album, the common debate with the band these days is who is the better singer and will they ever cross pollinate songs with current Vocalist/Bassist Steve Tucker into the David Vincent era material?

That aside, Kingdom Disdained features some of the best on fire riffage from original Guitarist Trey Azagthoth yet. This is evident from opening song “Piles Of Little Arms,” which hits the ground running at turbo speed and collects all enemies in its path. Also, travelling along the rocky surface streets filled with excitement and fury is “The Righteous Voice.” This is followed by the ransacking radiance of “Architect And Iconoclast,” feeding the mortal soul with the most vicious order of chaotic impulse found on any Death Metal album today.

The guitar work is so good, it almost is a guarantee that many listeners will cast aside the Morbid Angel vocalist debate by the time they get more than halfway through the album. Additionally, Scott Fuller does declare new law on the drums with some very up to par typical Morbid Angel speed demon drumming as Dan Vadim Von fills in flawlessly on guitar. The overall potent nature of it all is heard explicitly on “The Pillars Crumbling,” a track that is sure to gets the heart pumping. It pulverizes with unstoppable riffs and beats of destruction.

While “The Pillars Crumbling” may just be a hands-down favorite, there is no lack of quality content on Kingdom Disdained to be found. This is clear when hearing later album songs such as “For No Master” and “Declaring New Law.” An unstoppable force, the pummeling continues through to closing cut “The Fall Of Idols” with forceful gutturals on top of insanely brutal guitar work.

The other major selling and underrated marketing point of Kingdoms Disdained is the fire lit, bearded, satanic beast featured on the album cover – symbolism of a society in a state of disarray and destruction. With the band name imprinted in the darkest black, the artwork is highlighted by fire and smoke in such a beautifully evil setting. Simply put, there is no better visual to help listeners best grasp the concept Morbid Angel are going for here.

In a live setting, Morbid Angel is as brutal as ever. That said, although their set list may be somewhat limited to particular eras, it is not a disappointment and the inclusion of these new songs will be a pleasant addition to an extra brutal experience. Morbid Angel still stands high in the ranking of brutal Metal music, and for that reason, CrypticRock gives Kingdoms Disdained 5 out of 5 stars. 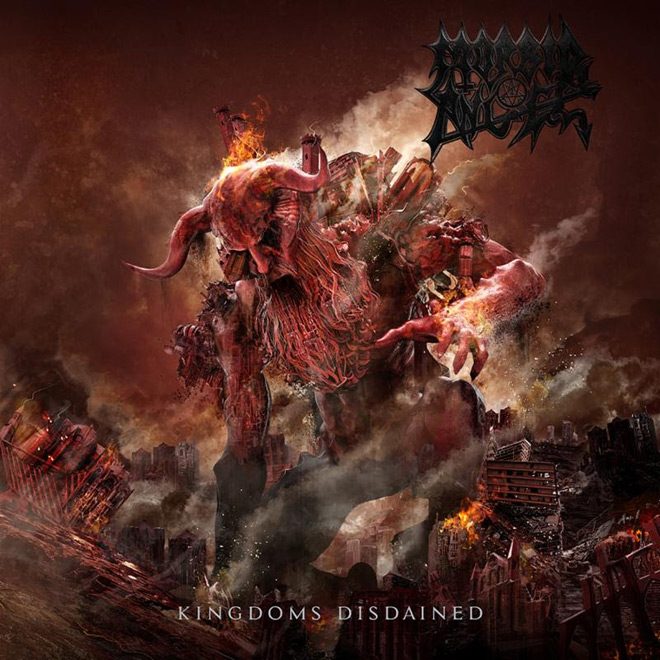 Witch Cross – Angel of Death (Album Review) Born of Osiris – Angel or Alien (Album Review)
Like the in-depth, diverse coverage of Cryptic Rock? Help us in support to keep the magazine going strong for years to come with a small donation.