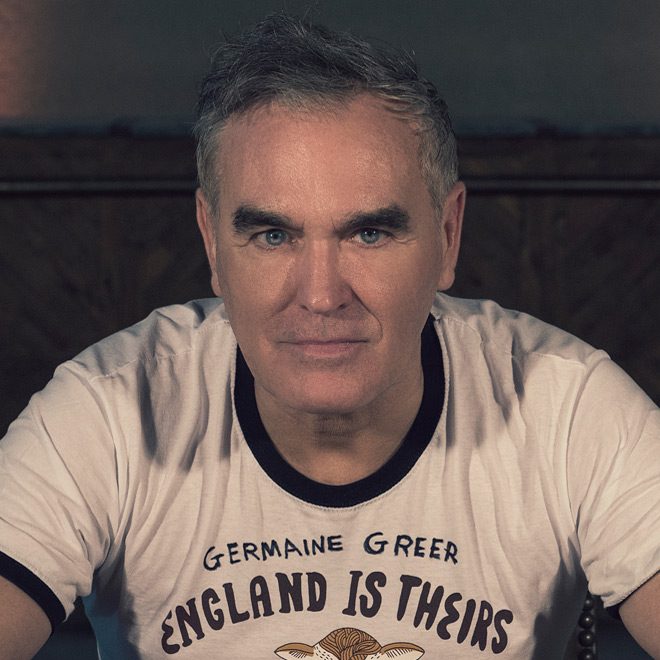 The equally loved and loathed vocalist and lyricist of the long-defunct The Smiths who had shown astounding proficiency and prolificacy in his time with the seminal English band, in the 1980s, and during the ’90s phase of his solo career, is on a bulldozer roll once again.

Just two years’ fresh from the success of his well-crafted tenth oeuvre, 2015’s World Peace Is None of Your Business, Morrissey is all ready to axe again the Monarchy and other issues that disgust him, with another impressive set of provocative proclamations draped in golden red and brilliant blue tin foils of catchy melodies and choruses as well as intricate arrangements and instrumentation.

Released on November 17, 2017, on Etienne Records/ BMG, and produced by Joe Chiccarelli, Morrissey’s eleventh offering, titled Low in High School, exhibits the singer’s unending, scathing sarcasm and irony that immediately surfaced as early as The Smiths’ first single of 1983, “Hand in Glove,” and in his own first solo song, 1988’s “Suedehead.” Music-wise, many of the new songs sound like remnants of the last album – melodic and textured – but are drenched more in heavier guitar grates, drum shots, and bass punches.

Low in High School opens with “My Love, I’d Do Anything for You,” whose intro recalls the same sinister sound of the title track of The Smiths’ second album and which then explodes into a coda of guitar-and-horn-section interplay in a seeming bull-versus-matador fighting festivity. Following next in fuzzy subtlety is “I Wish You Lonely,” which treats the listener to the quirky singer’s jangly Guitar Pop predisposition, as heard best in his earlier songs like “We Hate It When Our Friends Become Successful” and “November Spawned a Monster.” A heavy, jangly, sonic juxtaposition then ensues in the form of the lavishly orchestrated and beautifully titled “Jacky’s Only Happy when She’s Up on the Stage.” The dirge-like guitar plucks and the poignant cynicism flow seamlessly to “Home Is a Question Mark,” ending in a dramatic backdrop of marching beats, lush strings, and Morrissey’s soaring, velvety vocal laments.

The album’s first single, “Spent the Day in Bed,” is a change of atmosphere, owing to its spacey, funky, bouncy, and sprinkle of light Reggae elements. Then there is the momentous, Progressive/Art Rock–inspired epic “I Bury the Living,” which may be regarded as the album’s highlight because of its length as well as Vaudeville and cinematic appeal. Morrissey turns Classical and sentimental in the piano-dominated “In Your Lap.”

“The Girl from Tel-Aviv Who Wouldn’t Kneel” is another piano-oriented track whose Mediterranean and Klezmer flourishes fit well its lyrical theme. The ensuing, almost acoustic “All the Young People Must Fall in Love” builds up on the carrier melody of Morrissey’s “Interesting Drug” and then dips its heart and fingers in light Jazz and ’60s Baroque Pop, reminiscent of David Bowie’s debut album of 1967, particularly the tuba-led “Rubber Band.”

The risqué throwback “When You Open Your Legs” is Morrissey the provocateur at his usual best, expressed in lively Spanish/Portuguese Paso Doble style, which was last heard in World Peace’s “The Bullfighter Dies.” Its choppy and percussive rhythm carries over onto the more upbeat and faintly Shoegaze-influenced “Who Will Protect Us from the Police?” Finally, Morrissey, with current bandmates and collaborators Boz Boorer (guitar, clarinet, sax), Jesse Tobias (guitars), Mando Lopez (bass), Matt Walker (drums, tubular bells, percussion), and Gustavo Manzur (keyboards, piano, organ, synths, trumpet, accordion, Flamenco guitar) – finishes off Low in High School with the mystical allure of the somber piano ballad “Israel.”

Overall, the aural aesthetics of Low in High School is a delectable mélange of the crunchy guitar heaviness of 2004’s You Are the Quarry; the intricate, Flamenco-flavored finesse of 2015’s World Peace Is None of Your Business; and the Indie Pop guitar jangle of his early works. Lyrically, it paints yet another ship of thousand razor-sharp and romantic words of the same literarily witty, linguistically eloquent, politically polarizing, and cultural activist Morrissey. Yes, the adorable and belligerent bigmouth strikes again! Furthermore, he deserves an equally vocabularily elaborate artistic assessment of his latest masterpiece. This is why CrypticRock gives Low in High School 5 out of 5 stars. 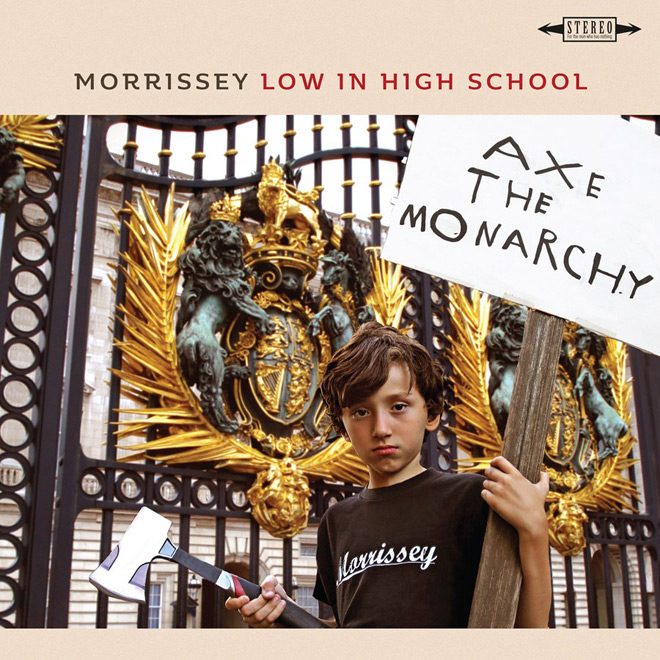