Before Mortuary Massacre begins, the audience is treated to a 1970s style cinema lobby advertisement, then a mock trailer for Teenage Psycho-A-Go-Go. The teenager-turned-killer by science plot harkens back to the 1950s or 1960s. Yet the dodgy camera quality and dubbing goes back to 1970s exploitation flicks. The ‘Prevues of Coming Attractions’ banner beforehand is very 1940s, but then the ‘Feature Presentation’ banner afterwards is quite 80s-esque. It is all done for laughs, and it may elicit a chuckle or two. It also prepares the audience for what to expect next. 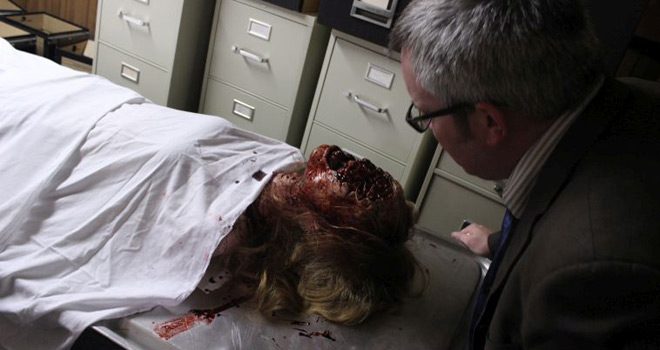 Presented by Razorwire Pictures, and originally released on DVD back on March 28th 2017 via the hardworking people at Wild Eye Releasing, Mortuary Massacre is out to wreak havoc. It is about Detective Giger (Todd Brown: Night of the Living Dead 3D 2006, The Man Who Knew How to Fly 2010) being debriefed about some mysterious deaths that occurred on Halloween night by local mortician Mortimer King (Carl Crew: Blood Diner 1987, The Secret Life of Jeffrey Dahmer 1993). It was directed by Christopher James Miller (Carrion 2007, Ironhorse 2010), who also wrote the screenplay with Lydia Blaisdell-Miller (Toolbox Murders 2 2013), based from stories by cast members Mark McGarrey (2035: Forbidden Dimensions 2013), Kyle Morris (2012: Ice Age 2011), and Sean Stearley (Quarantined 2009).

What is Mortuary Massacre really though? Well, it is an anthology film. Giger and King act as the thread connecting a series of short films about how the mortuary ended up with three curious cadavers. In short, imagine a feature-length episode of CSI: Miami, only with less cops and investigative jargon. Like the ‘prevue,’ the film starts as it means to go on, taking inspiration from Grindhouse Horror flicks like 1972’s The Last House on the Left or 1979’s Zombie Flesh Eaters, only it combines that with Tales from the Crypt, playing it up for laughs.

It consists of three horrific tales. The Apartment features an apartment manager slowly going insane as he sees creepy visions on the grounds. The Scrying has a group of youngsters using a mirror to communicate with the dead, unleashing a ghoulish cowboy in the process. While False Face is about a struggling actor who takes drastic measures to get the best of his more successful rival. 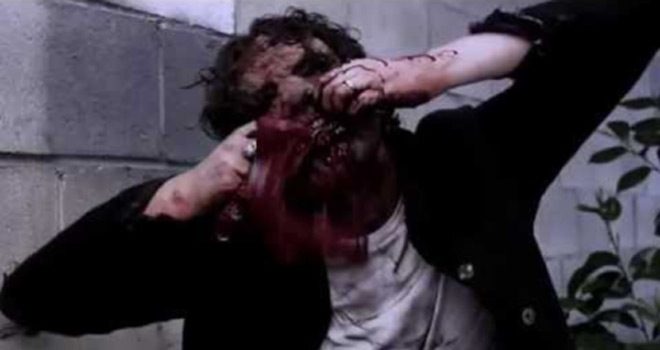 How does it fare overall? Well…it is certainly gross. The makeup effects are high on gore and other grisly business. It is not exactly convincing, but they succeed in being gruesome. They certainly work out better than the visual effects. It can be hard making a realistic-looking old film, but it takes more than adding film scratch and dirt filters. The camera quality is a little too modern for old-school, as are the modern references like phone-gazing millennials or 2008’s Twilight. Maybe the anachronistic combo is part of the joke, but if it is, then it does not hit the mark. The sound effects, even when played for laughs, are a little better. Yet, they overuse some of the same ones, and they sound pretty videogame-like in places; especially the ones taken from Tekken 3.

It has Grindhouse-style acting to go with the Grindhouse looks. The Apartment has McGarrey’s cartoonish manager, and the whitest street kids since Ali G. The Scrying has the strongest performances, but the scares bring out the actors’ inner cheese. However, the cheesiest, yet most fun performances lie in False Face. Morris’ Jason Lee Ray is suitably deranged. It is Steven Briggs’ Grant Hoffman who ends up being the most entertaining. He seems to be having fun playing such a smug jackass of a character.

The stories are not that hot altogether. False Face just about holds up with its jokes and scenery-chewing acting. The Apartment uses elements from 1980’s The Shining, like a grisly woman in the bathtub, or the creepy twins in the hallway. Meanwhile, The Scrying just feels like it is there. It does not copy and paste its scares, but it does not hold up when compared to other occult-ritual tales. It does have some out-of-place music though. For a so-so soundtrack, the electro-disco music over a violent scene is a curious choice. 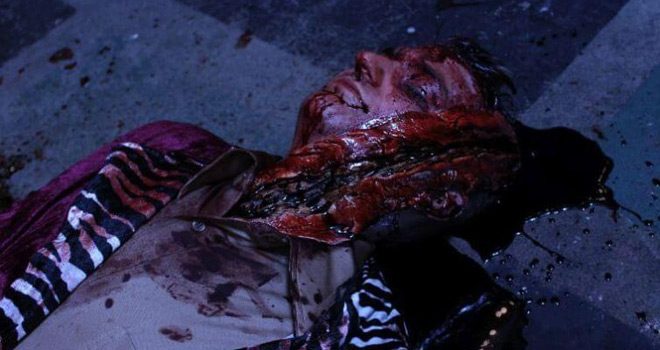 That puts Mortuary Massacre at 2 misses and a sort-of hit with its anthology. Even then, the distracting visual effects last throughout the whole picture, and a lot of the jokes fall flat. It has the gore effects, and a nice reversed-footage sequence in The Scrying, but it is hard to recommend it. If anyone is daring to give it a try, they should see if the Teenage Psycho-A-Go-Go trailer gets a guffaw. Once it does, they may find the rest to their fancy. Otherwise, CrypticRock has reason enough to give Mortuary Massacre 2 out of 5 stars. 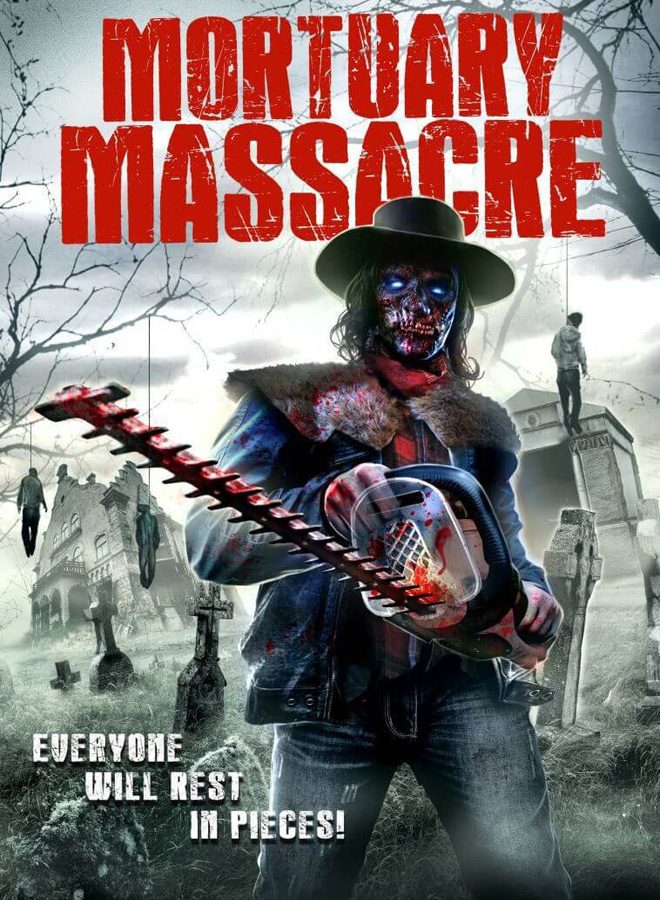