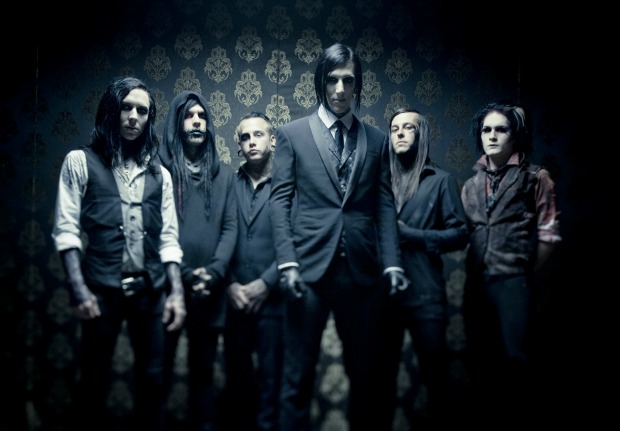 Motionless in White have been impressing audiences since their debut album Creatures (2010). Building a name for themselves with intense live performance, fierce image, and powerful songs. The band earned themselves a spot on Warped Tour last year further exposing their talents to a larger audience. Following the major success of Warped Tour the band released their high anticipated sophomore album Infamous in late 2012.

For those which know of Motionless in White, they would classify the band as gothic metalcore. With Infamous the band completely shattered the glass which held them and completely reshapes your image of them. Starting off with “Black Damask (The Fog)” completely ripping your head off from the get go with vocal assault, intense drums and guitar riffing. You are then led into a chorus where you are expecting the clean vocals and that is exactly what you hear but it’s a range above anything the band has done before. Perfectly setting the stage for the rest of the album. “Devil’s Night” the lead single of the album provides you with an industrial feel drenched with synthesizers, combined with different growling approach to the vocals. Chris Motionless wows yet again with a killer clean vocal display in the chorus complimented by melodic guitars. Lyrically confronting all the naysayers in life telling you what you can and cannot do. Chris’s emotional delivery intensifies the words letting you know his drive will not be taken down by others. “A-M-E-R-I-C-A” is a yet another expansion in the band’s sound. Taking on an industrial goth metal sound with dark clean vocals through the verses. Chris is accommodated by Vampires Everywhere! vocalist Michael Vampire providing crowds with one of the best chorus you may ever sing along with. Currently the song is being played heavily on hard rock formats and is somewhere of the cross over track leading the band into different genres of metal. “Burning At Both Ends” is a great melodic metal track further showing the dynamic quality of the band.

“The Divine Intervention” is a track one would think came off Marilyn Manson’s Antichrist Superstar masterpiece. Chris has managed to expand his vocal range and style even more. This is yet another song furthering the band from their metalcore label. “Puppets 2 (The Rain)” has a brutal opening, that of a European death metal feel. Leading into a chorus where Bjorn “Speed” Strid of Soilwork adds a texture to compliment Chris’s brutal bellow. One thing is clear with the lyrics on this song and every song on the album and that is passion, intensity, and a clear vision of where the story teller wants their life to go. “Sinematic” is perhaps the darkest song on the entire album. Keyboards, dark guitar melodies and emotional vocal delivery create a vivid atmosphere. In this song we hear another tier of Chris’s growing range. “If It’s Dead, We”ll Kill It” sounds like you are in an intense nightmare. Started with synthesizers and dark black metal like vocals into metalcore guitars and growls to a clear vocal chorus. The track features vocal appearance by Brandan Schieppati of Bleeding Through, further intensifying the effects of this head trauma. “Synthetic Love” is a beautiful industrial metal track in the vain of Orgy. Driven by the synthesizers and a larger than life chorus the track stands out as a hidden gem. “Underdog” is possibly the best track on the album and the stand out track of the band’s career to this point. Chugging heavy metal guitars, synthesizers and vocal attack bleed into a sea of aggression, triumph, and adrenaline. Lyrically intelligent, beautiful, and vindicating all in one. This is the anthem of a driven, passionate, never say die individual. Clearly the best track on an album stocked with greatness. The regular edition of the album closes out with the title track “Infamous”. A great end to a mind blowing album. Those lucky enough to get their hands on the deluxe edition of the album it is recommended. With two extra tracks in “Sick From The Melt” and “Fatal” plus 4 remix versions of album tracks. “Sick From The Melt” featuring Combichrist Trevor Friedrich. A heavy dance like industrial track which should be spun at all goth clubs worldwide.

Infamous is clearly a different direction for Motionless in White. As if the band had not impressed crowds enough they take their game to the level here. Maturing in their song writing, diversifying their sound, and breaking all walls down. It is very obvious much blood, sweat, and tears were put into the writing of the music and lyrics of this record. Chris Motionless and company took a risky leap into the unknown of alienating their fans here but the risk has paid off with a masterpiece. Picking up a completely new fan base and keeping the die hards along the way. If Motionless in White fans first reaction is negative to this album listen again, and again, and again. This is a gem and deserves to be heard by all. CrypticRock gladly give this album 5 out of 5 stars. 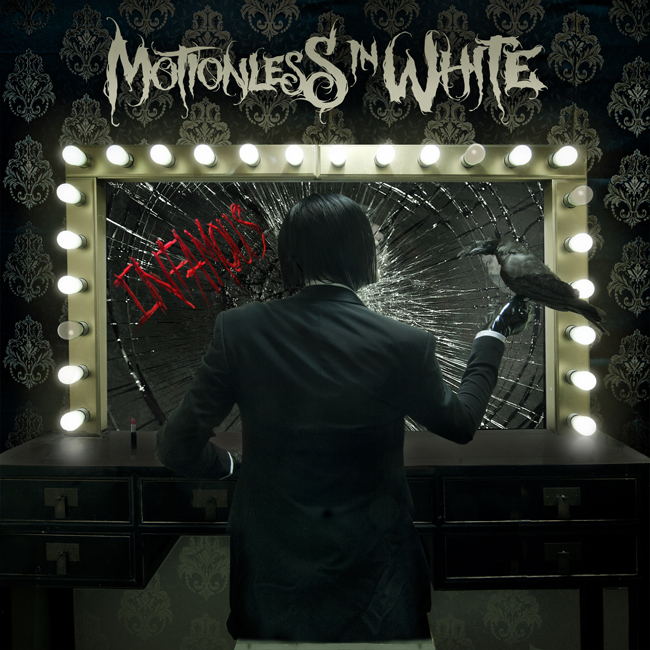