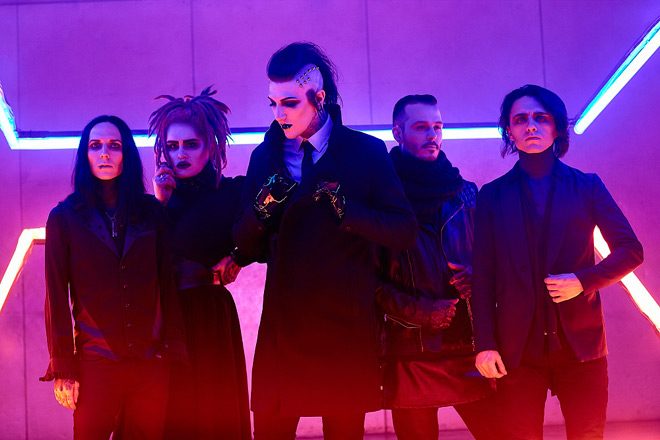 In case you did not know, every day is indeed Halloween and a reason to wear the blackest of black noir. A group of lads who celebrate the macabre and spend each night dancing on your graves, Motionless In White make their triumphant return to eardrums Friday, May 5, 2017 with Graveyard Shift on Roadrunner Records.

Motionless In White (who often abbreviate their name as simply MIW) are a Metalcore band who formed in Scranton, Pennsylvania in 2006, and are reportedly named for the Eighteen Vision’s track “Motionless and White” (Not too shabby, boys!). With influences ranging from Metallica and Slipknot to Depeche Mode and The Cure, Motionless in White’s sound was destined to be an amalgamation. Their debut, full-length studio album, Creatures, arrived in October 2010 and would peak at No. 6 on the Billboard Heatseekers chart.

As their star continued to rise, Motionless In White would sign to Roadrunner Records in July 2016. Known for their relentless touring schedule of the past eleven years, MIW have shared stages with the eclectic likes of Slipknot, Lamb of God, Bring Me the Horizon, HIM, In This Moment, Lacuna Coil, All That Remains, A Day To Remember, Bullet For My Valentine, and many, many more. They have performed on the 2013 Mayhem Festival, 2014 Vans Warped Tour, and had their material remixed by the almighty greats Celldweller and Combichrist.

A band that flawlessly blend the heavy stomp of Metalcore with Gothic and Industrial elements and wrap it all up like a classic Horror flick, Motionless In White’s fourth studio album, Graveyard Shift, arrives May 5, 2017 thanks to Roadrunner. Produced by Drew Fulk, this is a twelve-song anthology of brutal Metal, dance-worthy Industrial, Gothic flare, and that unique zest that truly sets Motionless In White – Vocalist Chris Motionless, Guitarists Ricky Horror and Ryan Sitkowski, Bassist Ghost, and Drummer Vinny Mauro – apart from their contemporaries.

The aggressively sexual taunt of “Rats” kicks off Graveyard Shift with Slipknot sonics and Marilyn Manson vocals; a dirty little masquerade that is pure Industrial Metal with massive balls. Fan girls will giggle like schoolgirls when Chris warns, “Shut your mouth before I fuck it!” Second track “Queen For Queen” bumps the Metal assault up a notch and evolves the sound away from the band’s influences and toward something less easily-defined; and it is heavy, my friends. Blistering, bloody, and beautifully heavy!

“Necessary Evil” explodes with pummeling bass and glittering keyboards, and features a guest spot from Jonathan Davis of KoRn. Containing a completely Gothic lyrical play on Leslie Gore’s “I’ll Cry If I Want To,” this is MIW meets Korn and so much better than anything the latter has done in decades! Heavy, throbbing, viciously seductive, you will head-bang while you dance.  In fact, it must be acknowledged that – at just three songs into Graveyard Shift – there are absolutely no doubts that Motionless In White are ascending to the Metalcore throne. This is a pivotal album for the quartet of Pennsy boys, and Graveyard Shift delivers in spades.

An ode to the naysayers, “Soft” is vicious, no-holds-barred aggression. “I’m not broken so don’t fix me,” Chris and co. growl.  They further taunt, “I am the nightmare that will haunt you in the light” in “Untouchable;” a superbly catchy, Industrial dance groove. Keyboards lead the charge in this beautiful marriage of undeniable riffs, intelligent lyrics, and gang vocals.

“If she’s got a pulse then she’s not my type,” proclaims “Not My Type: Dead As Fuck 2,” a cinematic Horror romp; it is a little cheesy but so deliciously fun. Think Heavy Metal Danny Elfman. One of the album’s heaviest assaults, “The Ladder” begins with a soundbite from the 2016 film The Neon Demon about the assumption that beautiful women are merely climbing a ladder to something better. The track is a vicious swearing off of being used as a stepping-stone by anyone; it is abundantly clear that Motionless in White will not be the ladder that anyone climbs. Meanwhile, “Voices” is not the best track off Graveyard Shift but it certainly has some dreamy keyboard work and a grooving rhythm. Similarly lacking “LOUD (Fuck It)” is the middle-finger-to-the-sky anthem of the album; frivolously fun but not as intelligent in its aggression as many of its predecessors. It does, however, tickle the eardrums with thoughts of 1989.

In a recent interview with some website called CrypticRock, Chris mentioned that “570” was the most personal song that he has written to date. It does not take a genius to figure out that these three digits are the area code for home; and this vicious rocker tells the story of a boy who fought the odds to rise to success through “no money, no sleep” and 10 years on the road. This is the heavy, emotional promise that “if you mean it, you will make it.” It is the tale of triumph for one band from blue collar nowhere. It segues perfectly into the pummeling “Hourglass,” which contains addictive bass-lines and some vicious, yet catchy vocal work that counts the hours to ask, “Will I expire before my dreams unfold?” It is the perfect introduction to the end, “Eternally Yours.” A catchy Rock-n-Roll offering with Horror themes that propel its addictive choruses and screaming verses; this track is the perfect summation of a band that embrace a motley crew of sounds that range far and wide across heavy music.

Graveyard Shift has influences, sure – Marilyn Manson and Slipknot, to name two – but it also waggles its pretty little fingers towards deliciously heavier things (Bleeding Through’s This Is Love, This Is Murderous comes to mind). Clearly there is no denying that this is a stellar Rock-n-Roll record and certainly poised to chart in all the 2017 “Best of” lists. In fact, Graveyard Shift might just be that career-defining album for Motionless In White, the little piece of plastic that pushes the quartet from club favorites to arena rockers. It is hard to predict anything in 2017, but it is absolutely certain that this is a Metal album that will impress a veritable plethora of fans – from red eyeliner wearing tweens to die-hard headbangers in the sticks. Graveyard Shift is heavy, acerbic, deliciously sensual Metal that begs to be played on 11! For these reasons, CrypticRock give Motionless In White’s Graveyard Shift 4.5 of 5 stars. 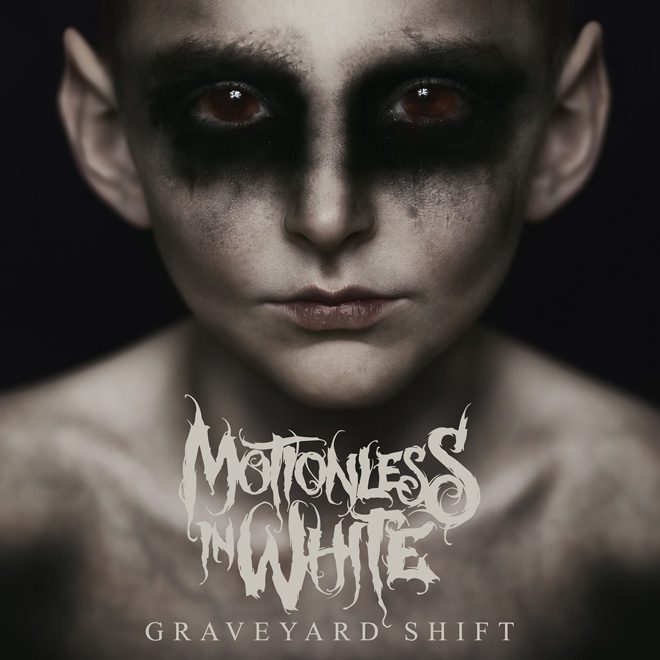