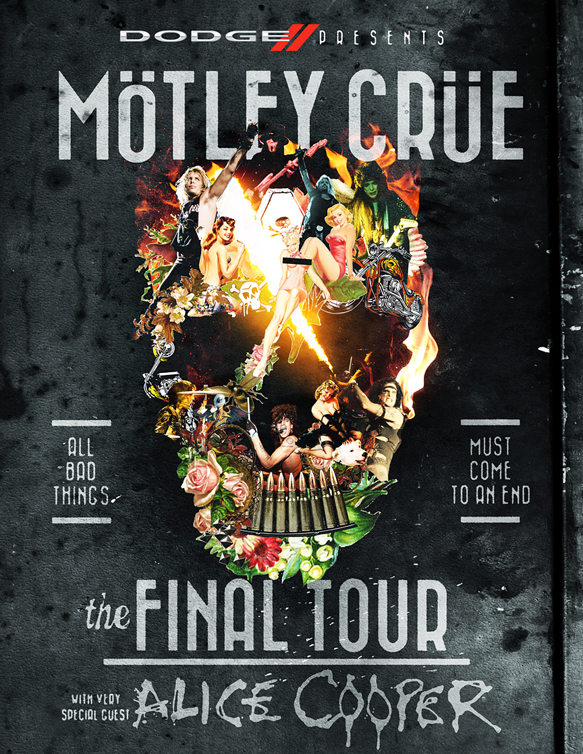 After more than three decades together, iconic rock ‘n roll band MÖTLEY CRÜE announced today their Final Tour and the band’s ultimate retirement. The announcement was solidified when the band signed a formal Cessation Of Touring Agreement, effective at the end of 2015, in front of global media in Los Angeles today. Celebrating the announcement of this Final Tour, the band will perform on ABC’s Jimmy Kimmel Live TONIGHT and will appear on CBS This Morning TOMORROW MORNING.

With over 80 million albums sold, MÖTLEY CRÜE has sold out countless tours across the globe and spawned more than 2,500 MÖTLEY CRÜE branded items sold in over 30 countries. MÖTLEY CRÜE has proven they know how to make a lasting impression and this tour will be no different; Fans can expect to hear the catalogue of their chart- topping hits and look forward to mind-blowing, unparalleled live production. “When it comes to putting together a new show we always push the envelope and that’s part of Motley Crue’s legacy,” explains Nikki Sixx (bass). “As far as letting on to what we’re doing, that would be like finding out what you’re getting for Christmas before you open the presents. We think in an age of too much information, we’d like to keep some surprises close to our chest until we launch the Final Tour.”

The Final Tour presented by Dodge and produced by Live Nation will kick off in North America on July 2nd in Grand Rapids, MI and reach 72 markets before hitting international territories in 2015. To Live Nation MÖTLEY CRÜE tours are not only box office successes but artistically their shows have set the bar for production and entertainment value. “There’s no arguing that Motley Crue have been and always will be the definitive bad boys of rock and roll,” says Rick Franks, Live Nation’s Regional President of North America Concerts. “But behind all those notorious stories is a legendary rock band that has revolutionized heavy metal and created some of the biggest hits in music history. They are a hugely successful global brand and a touring powerhouse. Everyone at Live Nation has a tremendous amount of respect for these hard working and extremely talented gentlemen. The music industry will never have another Motley Crue.”

The Dodge brothers were a notorious duo, so it seemed only natural to partner with the World’s Most Notorious Rock Band. “Whenever I talk to people about Motley Crue, the common thread is how cool and relevant the band remains even after 33 years,” said Tim Kuniskis, President and CEO, Dodge Brand, Chrysler Group LLC. “This irreverent ‘staying power’ resonates deeply with the Dodge brand as we turn the corner on our 100 year anniversary. What better way to celebrate the band’s final tour and the 25th anniversary of Kickstart My Heart than to do it together?”

Fans can look forward to Very Special Guest ALICE COOPER joining MÖTLEY CRÜE for an incredible package – Alice invented the genre and MÖTLEY CRÜE put steroids in it! “Real hard rock bands are hard to find these days,” said Alice, continuing,”Motley has always gone on stage with one attitude and that’s to blow the audience away. That’s exactly how we do it. Putting Motley Crue and Alice Cooper together is going to be just what this summer really NEEDS. We’re going to go out there and tear it up, and I can’t wait to see Motley on stage. Motley Crue and Alice Cooper – A match made in… Armageddon?”

As documented in the Cessation Of Touring Agreement the band signed at the press conference today, the band will not tour after this Final Tour. Band Attorney, Doug Mark of Mark Music & Media Law, explains “Other bands have split up over rancor or the inability of people to get along, but this is a mutual among all four original members and peaceful decision to move on to other endeavors and to confirm it with a binding agreement.” Vince Neil, Nikki Sixx, Tommy Lee, and Mick Mars will go their separate ways after the lengthy 2-year touring cycle. Tommy Lee (drums) explains “Everything must come to an end!! We always had a vision of going out with a big fucking bang and not playing county fairs and clubs with 1 or 2 original band members! Our job here is done!!!” Of the band’s tumultuous history, Mick Mars (guitar) adds “(It has been) more drama than ‘General Hospital’ it keeps ‘em watchin’ and they keep comin’ back.” Vocalist, Vince Neil says of the Finality of the tour – “I’ll miss playing with the guys but I won’t quit playing rock and roll!! I feel there are a lot of great opportunities and exciting projects after Motley.”

The Final Tour will coincide with the film made from MÖTLEY CRÜE’s NY Times Best-Selling book The Dirt. Jeff Tremaine (Bad Grandpa) has signed on to direct the opus that is set to debut in theaters globally in 2015, coinciding with The Final Tour. The Dirt is not only one of the best selling rock books of all time but also one of the greatest rock books of all time because of its brutal honesty, its unique voice, its multiple perspectives on the same events and its first-person inclusion of all members of the same band. Most rock memoirs are salacious mud-slinging accounts of a single person and MÖTLEY CRÜE was adamant to include the perspectives of all four of its members. Tremaine’s intention is to make, not just a great movie about a band, but a great movie about four misfits who, despite themselves and everyone else, band together to overcome the odds and change the history of Rock & Roll. “The Dirt’ is a movie I’ve wanted to make ever since I read the book in 2002,” says Tremaine. “I relate to the story on so many levels; my whole professional career has been about boys behaving badly, so I have a real connection to the material. It’s awesome to be working with the band at such an exciting time in Motley Crue’s history.” The film will be produced by the members of MÖTLEY CRÜE, Rick Yorn, Julie Yorn, Erik Olsen and 10th Street Entertainment.

BIG MACHINE RECORDS, home to Country Superstars such as Taylor Swift and Tim McGraw has teamed up in a joint venture with MÖTLEY RECORDS and ELEVEN SEVEN MUSIC for the summer 2014 release of a Country Music Tribute To MÖTLEY CRÜE. BIG MACHINE founder and CEO, Scott Borchetta, is among the legion of Country Music fans who love MÖTLEY CRÜE. The country tribute album will show off the band’s quality songwriting with these fresh takes on their classic hit songs. Among the artists already confirmed to be featured on the country tribute album is Florida Georgia Line. Borchetta says of the collaboration, “I have been a not-so-secret Crue fan from the beggining. When manager Chris Nilsson called with the idea for a tribute album on Big Machine Records it was an immediate ‘yes’ from me! Our album will highlight just how great the Motley Crue song catalog is. At the end of the day, that’s what will stand the test of time.”

Melissa Etheridge – One Way Out (Album Review)
Like the in-depth, diverse coverage of Cryptic Rock? Help us in support to keep the magazine going strong for years to come with a small donation.
Print page
0 Likes