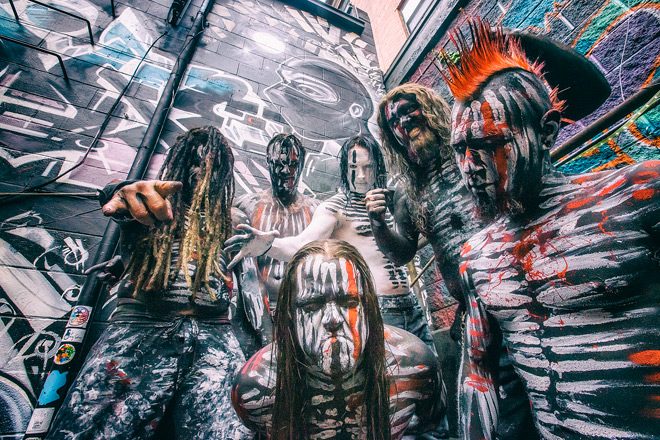 Is Motograter a ghost of the phenom they once were or a musical powerhouse reinvented? Hailing from California, the Nu Metal band made a name for themselves in 2003 with their impressive self-titled debut album. Hitting the scene with a unique extra heavy sound, thanks to their musical innovation, an instrument of their own creation which uses industrial cables, created a deep bassy tone. Calling it the motograter, it naturally became their name and the rest is history as they say.

Speaking of history, there is no denying Motograter’s past lineup has been quite unstable. That is not to say the band is without hope because thanks to longtime Guitarist Matt “Nuke” Nunes, the band has pushed forward in inspiring fashion. In addition, Bassist Mylon Guy has been in this band for around 9 years while Drummer Noah “Shark” Robertson joined the fold in 2013, Dustin “Skunk” Anderson came on as the master of the motograter in 2015, and Guitarist Jesse Stamper in 2016.

That leaves vocals, a spot many think is enthroned to only Ivan Moody. Well, Moody clearly moved on to Five Finger Death Punch over a decade ago, and in years to follow gives his former band his blessings to move forward. Clearing up any confusion as to what Motograter was and is, they are now completed with Vocalist James Anthony Legion on lead vocals since 2015, hence making them a complete and potent lineup.

A force which cannot be stopped, after 2 breakups and now sporting a new lineup, assuming the sound of any new music created would be the same is simply absurd, but who said different is a bad thing? Marking their first full-length album since 2003, the new sound and feel of Desolation may not be as heavy as longtime fans may hope for, although the band does use some familiar elements to evoke a new, almost eerie vibe for a new chapter in Motograter’s story.

Set for release on August 11, 2017 via EMP Label Group, the cover for Desolation matches the eerie feel thanks to Sam Shearon, who is known for his occult and Sci-Fi themed artwork. He has created covers for comic books and graphic novels including Clive Barker’s Hellraiser, as well as album and merch designs for groups like Iron Maiden, Rob Zombie, and Rammstein.

Produced by Ahrue Luster (Ill Nino/Ex-Machine Head) and mixed by Joshua Wickman (Within the Ruins, KING 810), the new 11-track album kicks off with “Parasite,” which has a lot of heavy vocals blended into electronic-feeling singing. Then comes “Dorian,” a single which is currently at #28 on the Billboard Mainstream Rock Indicator Charts. A good indicator of the sound and feel of the rest of tracks, it is followed by “Victim,” which begins with a brief heavy motograter intro and a quick switch to vocals. Nonetheless, this song truly showcases the deep capabilities of the unmatched motograter.

Then “Paragon” is crowned the cut with the catchiest chorus of the album, one which will keep running through a listener’s head after just one listen. In fact, it will be the metalheads revenge anthem for the summer of 2017. Then “Bleeding Through” mirrors feelings of regret and self-reflection while possessing a haunting tone. On the other side of the coin, “Misanthropical” is about reinvention, rejecting society’s standards, and coming out on top. With just as much fury, “Daggers” charges in before settling with an even steady pace before breaking into some rapid slamming guitar matched with lyrics of self-hatred and rejection.

With only a handful of songs left, “Locust” has a stunning breakdown, segueing smoothly into “Rise (There Will Be Blood),” which is hands down the best heavy track of the album. Complete with stunning solos and the perfect balance of clean and growling vocals, it is a highlight worth waiting for. Which leads to “Shadows,” a slower song and fitting way to close out Desolation as it conveys a final battle cry, creating images of a world in flames.

After years of the creative process, plenty of struggles, overcoming prejudices of their new lineup and sound, it is clear that new Motograter deserves a listen. Nuke and company have redefined the band, as well as the capabilities of their personalized instrument. The changes made will put the group on a new path allowing them to separate from the Motograter of the past and Desolation brings their hard work to light. A welcomed return, CrypticRock gives Desolation 4 out of 5 stars. 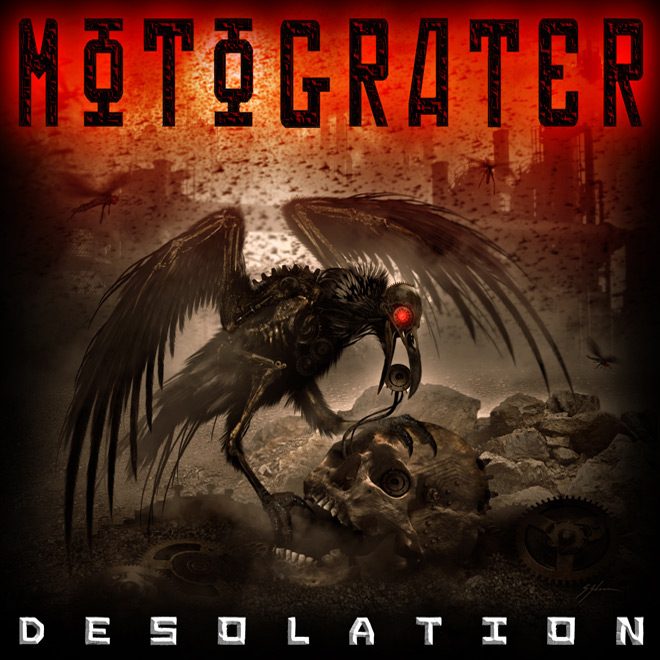