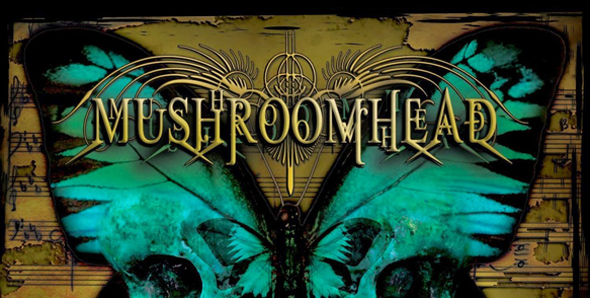 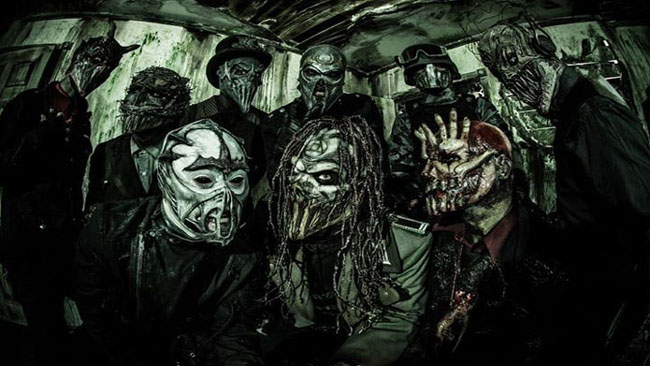 Industrial-crossover-metal band Mushroomhead broke out of Cleveland, OH over two decades with a unique style and sound that was bound to draw attention.  Their three independently released albums between 1995 and 1999 became underground hits that resulted in the band’s signing to Universal Records in 2001.  Mixing dark tones with theatrical masks, their major label debut XX broke the Billboard 200.  With an amazing nine members, the band has had several line-up changes over the course of twenty years, but kept the core together through it all.  In 2014, Mushroomhead is comprised of the three drummers Skinny, Robert Diablo, and Stitch, vocalists J Mann, Jeffery Nothing, and Waylon, guitarist Church, Keyboardist Schmotz, and bassist Dr. F.   Now the band unleashes their eighth studio album, The Righteous & The Butterfly via Megaforce Records, marking the bands home base since 2006.  The album marks some changes as well, with the return of vocalist J Mann and the debut of new guitarist Church and bassist Dr. F., replacing Pig Benis and Gravy respectfully.  Featuring a familiar production team of Skinny and Bill Korecky, Skinny proclaimed “This album damn near wrote itself”.

The sound and atmosphere of The Righteous & The Butterfly is demonstratively dark and nightmarish.  Consisting of fourteen songs in total, it is difficult to point out one or two stand-out tracks on the album.  Being more of a cohesive monster, this album needs to be listened to from start to finish to completely grasp it.   The opening neck-breaker “Our Apologies” includes intense guitars, percussion, and vocals that lay the ground work for thick groove-themed songs to follow.  Songs like “How Many Times” are carried by dark emotionally sung verses and warm synthesizers.

Other songs range from crossover-hardcore-metal tracks “Devils Be Damned”, “Qwerty”, “Son Of 7” to emotional anthems like “For Your Pleasure” and “Worlds Collide”. The album is stated to be dedicated to original guitarist, J.J. Righteous and the band’s former photographer (and drummer Steve “Skinny” Felton’s wife) Vanessa Solowiow, who unfortunately both passed at young ages.   Tapping the vein of more somber emotion, “Portraits of The Poor” and “Childlike“ have Pink Floyd like moods with dark piano and heart-felt singing.  This conveys a good cross-section for the album until the aggression picks up again.  Like a story book with a variety of climaxes, the album tells a very intriguing tale through its sounds and lyrics.  On the closing portion of the album, the song “Graveyard Du Jour“ has a big ear-catching chorus, nice piano melody, and complimentary eerie sound effects which make the song a horror fans dreams come true.  Throwing the audience a curve ball, the album closes out with a guitar riff and electronic heavy take on Adele’s number one hit “Rumor Has It”; then again, always expect the unexpected from Mushroomhead.

The Righteous & The Butterfly is a very emotional, personal album where Mushroomhead’s influences of the past seem to be assimilated and their fans see them get back to their roots.  As always, there is an eclectic mix of sounds in each song where Mushroomhead manage to make their chaotic approach work like only they know how.  This is a very dark, soulful industrial-rock album which has a lot to explore for fans that want to sink their teeth into something juicy and do not need a hit-single to hook them in.  CrypticRock gives The Righteous & The Butterfly 4 out of 5 stars. 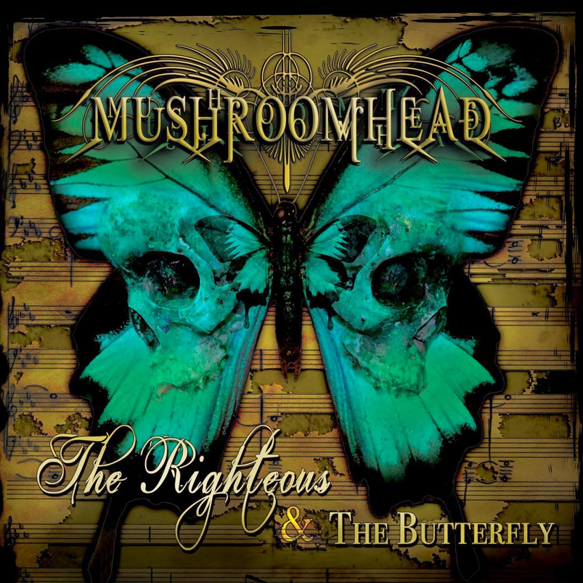