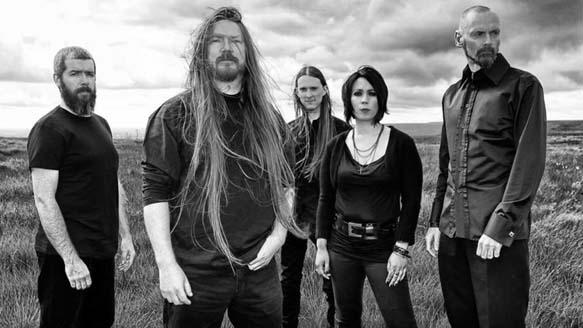 It seems that for many bands of greater tenure, returning to the roots is often a remedy for stagnation of any sort. This is not to say that Yorkshire, England’s merchants of doom My Dying Bride have lost the script for what made them great, but once in a while circumstances demand a group of individuals to reach back while reaching forward in order to advance. For album number twelve, entitled Feel the Misery (out now on Peaceville Records), the band returned to Academy Studios and welcomed original guitarist Calvin Robertshaw back into the fold. He joins original Guitarist Andrew Craighan, founding Vocalist Aaron Stainthorpe, Bass Guitarist Lena Abe, and Keyboardist/Violinist Shane Macgowan, hoping to ignite a flame of darkness in the landscape of a genre they helped create. Along with Paradise Lost and Anathema, the “Peaceville Three” changed the landscape of Heavy Metal music as far back as 1990.

Turns out the band returning to the scene of its classic era was the proper conduit to bitterness My Dying Bride fans were hoping for. The guitar tone harks back to the tortured melodies of yore, while the violin is once more the keen of sorrow so integral to the sonic empire of sadness this band has worked so hard to build. Stainthorpe sounds as forlorn as ever, as the album sees him singing, growling, and talking in almost equal measure. “My Father Left Forever” was the first song released to the public, and its interesting beat and pacing already speak to a more creative outpouring from the band, as the double-bass and riffing sound almost old-school Death Metal in their delivery. The violin and the voice of Aaron Stainthorpe ensure the atmosphere remains gloomy instead of vicious.

Feel The Misery exudes the very emotion it implores the listener to feel, as the wretchedly heavy “To Shiver In Empty Halls” churns from the speakers with the force of despair itself. The riffs on this album are chunkier, the intent clearer, and the atmosphere harks back to the formative years of My Dying Bride in a way that should please old-school fans. There are introspective parts, such as on “A Cold New Curse,” whose haunting guitar tone augments Stainthorpe’s pained voice. The transition to super-heavy riffing at 3:54 brings is both seamless and tension building. Without a doubt an album highlight, My Dying Bride then reaches into the very crucible of sadness with “I Almost Loved You,” a song not unlike what the band went for on the atypical Evinta release from 2011. Even more so, the song is reminiscent of “For My Fallen Angel” off of 1996’s Like Gods of the Sun. The violin pierces the heart with a clarion call to utter sadness, the production making it feel like one is sitting in a big empty church in the middle of the night, perhaps while Winter winds claw at the shutters outside.

On the title track, Stainthorpe’s poetic ode takes center stage, as he implores the listener to truly feel the misery. His spoken intro hangs in the dead air until the riffing storms in, and that quite simply is vintage My Dying Bride. A triumph of personal tragedy, indeed. Seemingly going for the same opposing dynamics which flavored their classic releases, a song like “A Thorn Of Wisdom” beats with a different heart, in a stylistic departure to more goth territory. Fans will be intrigued to hear the slight effects on Stainthorpe’s voice. They are subtle, much less in your face than what fans heard on “Heroin Chic,” (1998 – 34.788% Complete) for instance. “I Celebrate Your Skin” roils in breathless throes of desire, a slow crawler of drawn out riffs and dreamlike vocals. “Within A Sleeping Forest” closes out the new album, coming in at 10:43, and it is the only section where perhaps a few more changes in dynamic might have served it a bit better. Fans of slow, crawling doom should be very happy, however, as the song certainly strikes the right chords. The violins are gorgeous, and the guitar sound cannot be overstated. If there is one production quibble to be made, it is that the drums are perhaps a bit too quiet in the mix, the kick a bit too tinny. Fans will recall 2001’s The Dreadful Hours, with its massive percussion sound, as a reference.

Nevertheless, Feel The Misery is a triumphant return to a form many fans of the Yorkshire legends have been yearning for. All in all, My Dying Bride composed a majestic piece of music for many a rainy night’s sorrowful reflection. CrypticRock gives Feel The Misery 4.5 out of 5 stars. 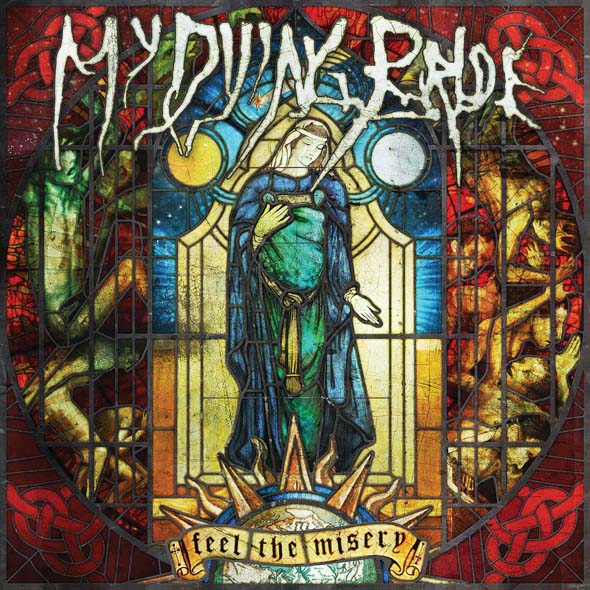