Nails – You Will Never Be One Of Us (Album Review)

It is a new era in the corridors of aural extremity, sixteen years into a new millennium that has so far yielded very little in the way of Jetsons-style innovations, but has certainly provided a whole hell of a lot of war, violence, suicide, shootings, and hopelessness. Art follows the travails of life, and in the hot, crowded, economically riven state of California, an expression of darkness within and without emerged in 2009 called Nails. A vision of three young men, the screams and riffs of Nails come courtesy of Todd Jones, while John Gianelli lays down the four-string bottom end and Drummer Taylor Young obliterates the kit. June 16th, 2016 sees the release of their third album, entitled You Will Never Be One Of Us, for Nuclear Blast Records.

With a length of just 21 minutes, folks new to the band might balk at such a short running time for any proper album. Glance at their last LP, 2013’s Abandon All Life, which clocks in at 17 minutes, and then take a gander at their 2010 debut, Unsilent Death, which waxes and wanes in a blink-and-you’ll-miss-it 14 minutes.

The formula here is one of rapid devastation. Make the point and then get out while the blood is still warm. Nails have shown a penchant for this, and You Will Never Be One Of Us continues this philosophy. Musically, Nails sounds like the first Napalm Death album (Scum) met the first three Agnostic Front albums in a dark alley and had a knife fight, but not after first tripping over Fear Factory’s classic debut record, Soul Of A New Machine. But one look at the stark black and white album covers depicting morbidity and its no surprise that the Black Metal set was feeling a kinship to these upstarts. The new album, with its red and black tones and tentacled, demonic monk collage, again evokes a very depressive Black Metal tone. From the standpoint of a long time extreme music fan, it is clear that tried and true styles that once existed separately are being crossed over once again. The kids now call this stuff Powerviolence, but whatever tags journalists and “scenesters” come up with, You Will Never Be One Of Us hits the listener like a grenade in the face.

The introductory wash of feedback in the opening title track subjects the listener to an immediate barrage, with a breakdown that sees the kick drum tick-tick-ticking along to the guitar phrasing, evoking shades of Raymond Herrera (Fear Factory). The part that follows is vintage Hardcore. “Friend To All” has that Grindcore meets Hardcore blast before Gianelli’s rope-thick bass tone takes over. Fans of the style will slaver over that bass tone, reminiscent as it is of classic Shane Embury (Napalm Death) and Andrew Shives (Fear Factory). The mosh-worthy mid section of “Life Is A Death Sentence” will get even the most stoic head nodding along, while the comparably spacious “Violence Is Forever” encompasses 3:47. Mid-paced, it lays down a mean Hardcore set of riffs, with a double-bass laden bottom end that transfers to a much more breakneck tempo, with Jones adding a filthy couple of solos into the mix.

In “Savage Intolerance,” Nails has themselves a nice slice of old school Death Metal not unlike the way the boys in Sweden always did it. “In Pain,” over its stunted length, goes from a Lock-Up style blast to some killer soloing. Much like a certain car theft film, its all gone in sixty seconds. “Parasite” and “Into Quietus” continue the back half of the album’s thread of music much more akin to Grindcore-influenced Death Metal as opposed to the more Hardcore style going on in the album’s front half. It is all building to the only real disengagement from the path everyone expects Nails to take.

Closing song “They Come Crawling Back,” at over 8 minutes in length, might come as a surprise to some fans. But one must remember that Nails are not writing one minute songs because they lack the ability to compose longer ones. The energy wrapped up in the songs they record could power a small city for a year. This is rage incarnate, spit with abandon in carefully controlled outbursts. This last song builds around a repeated set of riffs, and resolves into an almost Godflesh-like chug at around the 3 minute mark. Featuring some repetitive song structuring, the mid section rolls along almost hypnotically until it grinds down into a powerful, sluggish, yet titanic heaviness that fades out in a hail of solos and cymbal crashes.

Nails may not be reinventing the wheel, but they are taking the aforesaid elements of Hardcore, Grindcore, and Death Metal and making something with zero filler and no dull moments. While fans might itch for more material, Nails is hardly the first band to blast their message forth so quickly. Punk legends Bad Religion put themselves on the map in 26 minutes with 1988’s seminal Suffer album, so other than wishing for more, there really cannot be any knocks against Nails for the thundering fly-by that is their albums. You Will Never Be One Of Us is certainly a clash of styles that were birthed long ago in the 1980’s, but the Californians do it with such convincing vitriol and authenticity, it is very difficult to play the album and not want to incite a riot. CrypticRock gives You Will Never Be One Of Us 4 out of 5 stars. 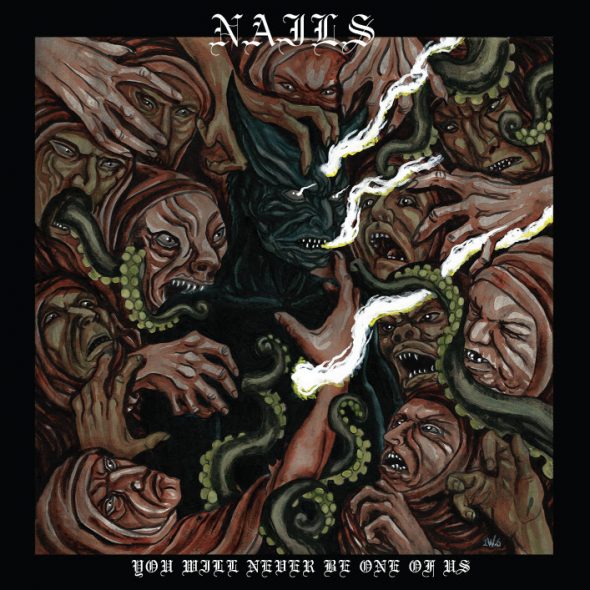 Album review, Death Metal, Grindcore, Nails, Nuclear Blast Records, Powerviolence, You Will Never Be One Of Us
Print page
0 Likes