In the realm of Horror films riddled in fang-toothed creature-features containing the likes of 1931’s Dracula, and 1922’s Nosferatu, there is one movie that stood out like a sore neck-bite from the rest; a movie that has garnered more clout today than it should have when it was first released. That film, 1987’s unique vampire saga Near Dark.

Released in theaters on Friday, October 2nd in 1987, because of such hits as 1985’s Fright Night and earlier that same year, The Lost Boys, there was an eagerness to get yet another vampire hit out there. That said, the distribution company DeLaurentiis Entertainment Group was none the happier to offer-up an answer to the fanged lore of the undead with the releasing of Kathryn Bigelow’s Near Dark. 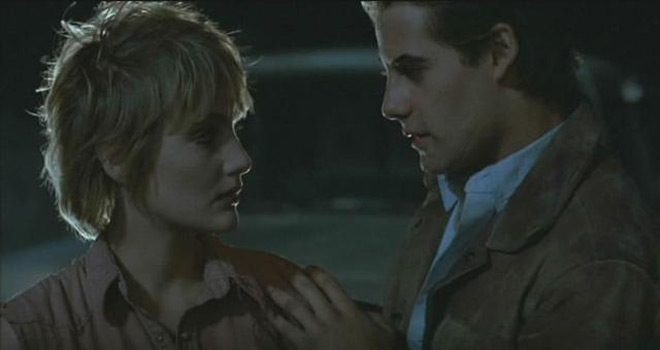 No matter what anyone may want to think of such a movie, not one negative thing could ever be uttered when it comes to Near Dark. Why? Because it contains such a slick storyline, for one, that is wrapped so tightly around a wall-to-wall doom and gloom, featuring a cast of characters that should be hated but have instead become infamous and quite likable. What is even better about Near Dark is its setting, which has a backdrop against a western sky; and beyond this sky lay the way of western life, lush with beautiful desert scenery, and of the countryside. Throw in a ruthless gang of vampire bandits into the mix, along with a slight romance, and what becomes the result is an amazing take on the vampire craze.

As the story within Near Dark goes, for those not familiar, what begins as an innocent flirtation between two people will lead to a new but very dangerous lifestyle in its wake. This occurs when Mae (Jenny Wright: I, Madman 1988, The Lawnmower Man 1992) is sweet-talked by the handsome Caleb (Adrian Pasdar: Top Gun 1986, Carlito’s Way 1993), blossoming a romance between these two lovebirds. Mae has a secret that she rather not mention right away; a secret that could destroy any chance she has at feeling real love. The problem is, this secret is also giving her one hell of an appetite, so, during a little sexy-time, Mae bites Caleb’s neck, sending him down a spiraling staircase of change, new beginnings, and survival.

Who could it be to think of such a wonderful story is none other than aforementioned Writer/Director Kathryn Bigelow (Strange Days 1995, The Hurt Locker 2009), along with the impeccable skills of friend and Co-Writer Eric Red (Blue Steel 1989, 100 Feet 2008). Apparently, Bigelow and Red both wanted to make a straight-up Western film, ripe with cowboys and horses, but sans any Clint Eastwood. What Bigelow and Red did instead was marry the wayward life of vampires with a western-esque setting. This proved to be a great and refreshing mix in the end. 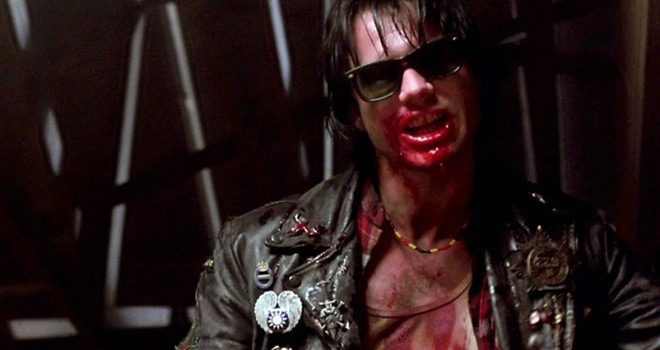 Unfortunately, following its release, Near Dark did not perform all too well at the box office. This was mostly due to the fact that the distribution company had fallen into an unfortunate bout of bankruptcy. Furthermore, because of such a thing, Near Dark did not receive enough promotion it truly deserved, which kept moviegoers in the dark as to its release. Thanks to home video, it would be later on in its shelf-life that Near Dark would become a huge, cult-favorite among Horror fans. Besides video rentals, cable television would also help bring more attention to what originality lies within this amazing movie.

As for the vampire bandits in Near Dark: these things are ruthless and vile, but they are a close-knit family of friends that have been surviving together for hundreds of years while being trapped in the un-aging vessels of which they possess. The interesting thing about these vampires is what actors are portraying each.

All familiar faces, of course, for the hardcore’est fans of genre films. Lance Henriksen, Bill Paxton, and Jenette Goldstein are the head bandits, and, incidentally, were all in Director James Cameron’s 1986 hit sequel Aliens. The sight of these amazing actors brought much joy and awe at first watch, for those who have seen the latter-mentioned film, because it was a chance to see them all performing alongside one another again—only, this time, under a different setting. Being that Bigelow and Cameron had once romanced one another back in the late-‘80’s, the thought of these great directors lending actors is quite an endearing thought. With Near Dark, this “borrowing” worked in the favor of the movie. 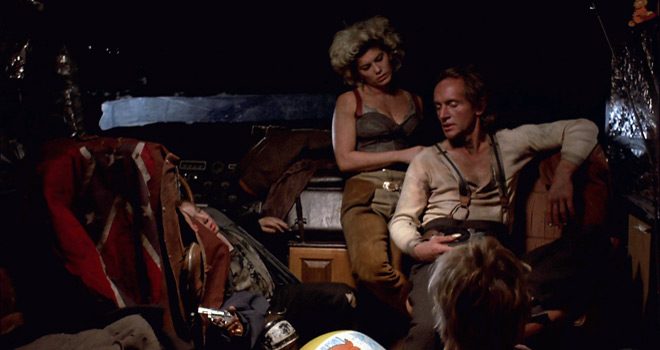 As years have passed since 1987, though, Actors Henriksen and Goldstein have long been active in other movies. Unfortunately, though, Bill Paxton has passed away, leaving behind a legacy of amazing feats and achievements. Although Paxton had since continued to prove how great an actor he was after Near Dark, he also took a chance at directing movies; two in particular, actually.

In 2001, Paxton directed one of the greatest surprise-hits called The Frailty, a Supernatural/Thriller of sorts, that told the tale of a father (Paxton) who believes an unknown force is telling him to kill-off “bad” people who are truly demons. In 2005, Paxton directed another amazing but much-overlooked biographical film called The Greatest Game Ever Played. It featured Shia LaBeouf portraying the late-golf great Francis Ouimet who becomes the first amateur to win the U.S. Open. Paxton took this particular film and proved what a little imagination could do for what could have been a typical sports movie. In doing so, he flew The Greatest Game Ever Played pass any and all expectations. For those who have yet to see either of Paxton’s films need to do so straight-away.

As far as the other cast members, no one can forget the entrancing performance of Jenny Wright as Mae who came across as pure, innocent, and mysterious. Her approach to the character made for a delightful romance interest with her and Adrian Pasdar’s Adrian, a rugged cowboy type with a big heart. Then, of course, there was Joshua John Miller (Teen Witch 1989, The Wizard of Gore 2007) as the volatile Homer, a man trapped in a kid’s body.

Back to the talented Bigelow, she has proven to be a great director with how well she can keep a certain vibe last throughout the entirety of her films – 1995’s Strange Days is another great example of such. In regards to Near Dark, Bigelow keeps this lurking gloom hanging over the heads of the whole cast, and underneath this gloom she sprinkles in some dark humor, and a lot of bizarre fun. Looming over all of what was mentioned, she also has this way of adding such heart to practically every character—whether good or evil. For instance: the bandits stick together like a family through thick and thin; not like a gang of selfish-prick, money-hungry hoodlums. This family has a lot of love, and in many scenes this will be shown. 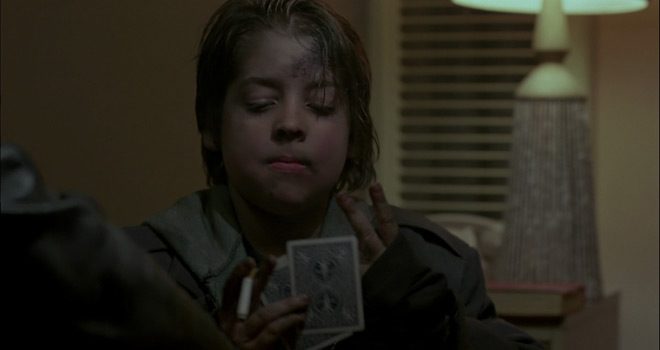 Last, but never least, is the amazing writer Red, for he has had a hand in many great Horror films since and before the release of Near Dark. One in particular is the infamous, irreplaceable, highly original, and top-notch Thriller 1986’s The Hitcher. In 1991, Red wrote and directed the very underrated Horror movie Body Parts, and again in 1993 with Bad Moon. Red has a certain style to his writing that is hard to pinpoint; what results on the big-screen, though, is one hell of a cinematic ride. Eric Red had such a way with mixing grittiness and humor to a story, while building such great character development with any movie he has ever done. With Near Dark, Red makes every character shine as bright as the sparkle gleaming from the spurs of their boots.

The movie Near Dark will never fade, never die down, and will always be remembered as being “that awesome vampire movie.” It has this way of grabbing the attention of anyone first setting a pair of eyes upon the opening scene, and keeping them there until the very end. There is no hokey in this faux western called Near Dark, and no pokey, whatsoever, in the way it tackles the lore of vampires. Near Dark has become a legend in its own right, even after 30 years, and will continue 30 years later. In truth, for every once-bitten lost boy and girl trapped in a fright night before the twilight of any breaking dawn—behind the shadow of a vampire, it will always be Near Dark. 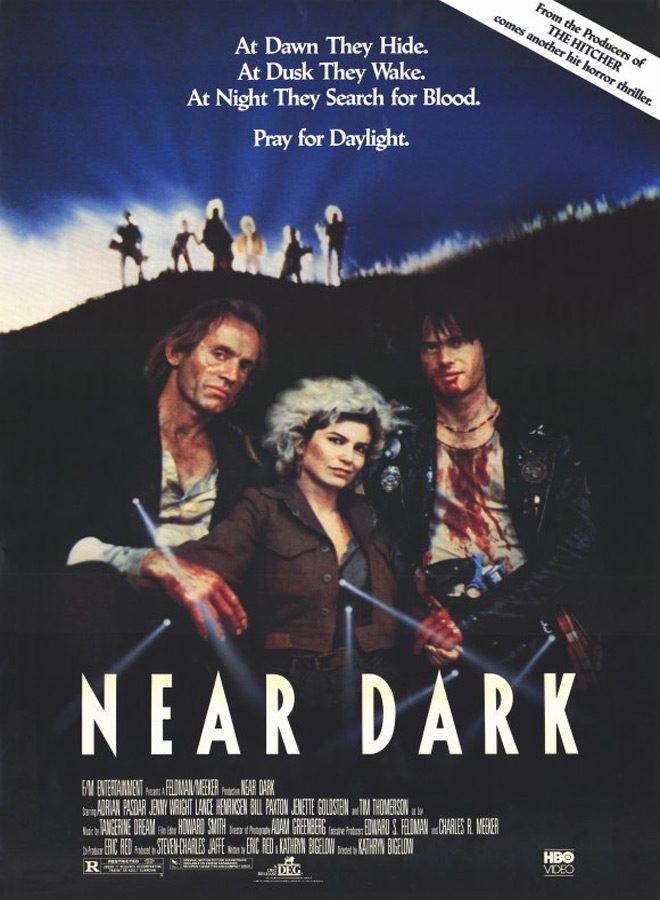