Neil Young & Promise of the Real – The Visitor (Album Review) 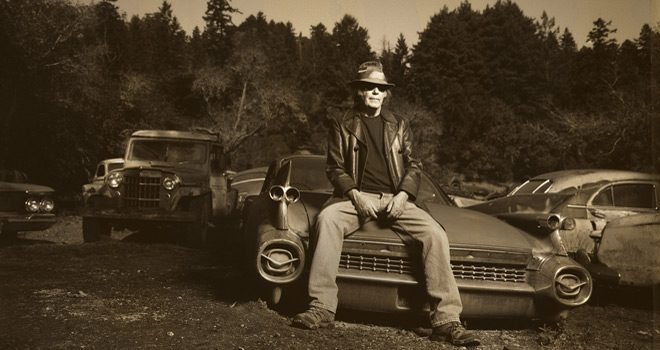 Singer-Songwriter Neil Young, a Canadian who came to Los Angeles, California over fifty years ago, has uncovered another layer of protest songs with his latest album The Visitor. His second studio recording with the band Promise of the Real – Lukas Nelson (guitar/vocals), Micah Nelson (guitar/piano/vocals), Corey McCormick (bass/vocals), Anthony LoGerfo (drums), and Tato Melgar (percussion) – The Visitor is an angry Rock album. In fact, it is ready to hit the public in more ways than one on Friday, December 1, 2017.

A follow-up to 2015’s The Monsanto Years, a record that reached #2 on Billboard’s Top 200, The Visitor is another caustic and thought-provoking anthemic attack on the modern state of being in his adopted country. Released through Reprise Records, produced by Neil Young and John Hanlon, the ten track album is a musical trip that came out of Young’s work at Shangri La Studio in Malibu, California just a few months ago.

A relatively quick turn-around for a record, what comes out of the recording sessions is nothing short of voices screaming out about the state of American culture, society, and politics. Yes, it can be said that this is the angry music that comes at a time of great cultural upheaval, but maybe that is exactly what we need. A different era than that of the 1960s, the challenge Young addresses today is just as potent. For example, leading song “Already Great” is purposely a complete contradiction to the campaign slogan of President Donald Trump. Filled with crowd chants, it is a song of inclusion in many ways lyrically with spotlight on the dissonance and fear that is spewed at the world from a small percentage of world leaders.

The well-known vocal of Young comfortably eases in a message, in case, this may be your dad’s Neil Young, but there are no crazy horses around here. From songs such as “Almost Always” to the harsh “Stand Tall,” it is a call to arms, standing shoulder to shoulder regardless to defend what is right. This all in mind, The Visitor is an album of delicious contrasts. “Carnival” paints a soundscape full of celebratory images in landscape form. A masterclass in storytelling to say the least, “When Bad Got Good” is another stellar example of saying more than thousands of words could as a direct attack on the country leaders.

Other songs such as “Fly By Night Deal” act almost like Rap, but then there is the Blues vibe of “Diggin’ A Hole.” Some of the best music on The Visitor are brief hits to the ears and soul lyrically, which works for a society that has the attention span of less than a flea. Are we “Children of Destiny” like Neil Young suggests, filled with hope, courage, and anger? Young’s words are pointed and truthful while there is a connection to a raw soul that has nothing to hide. Sure, it may annoy some listeners or make others scream in the dark, but it is good to know that there are enough people out there listening that will turn the light on.

The Visitor is the best of Neil Young’s past, present, and future. That said, is it difficult to believe that a seventy two year old man is still this angry after all these years? Not really. There have been periods of reinvention, such as 2003’s Rock Opera album, Greendale, but even then, Young tackled serious societal issues. What is not difficult to believe is the fact that The Visitor is an album of the ages – an angry political statement reminiscent of some of the best protest music in modern times. For these reasons, CrypticRock gives this album 5 out of 5 stars. 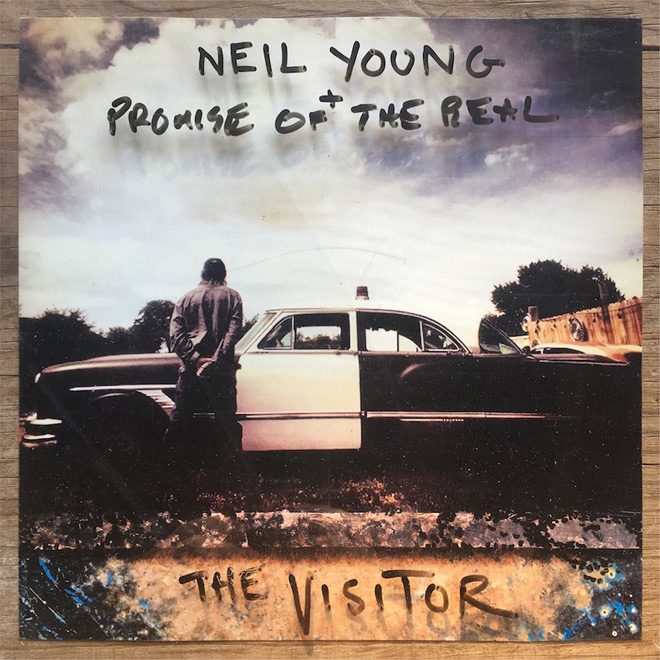