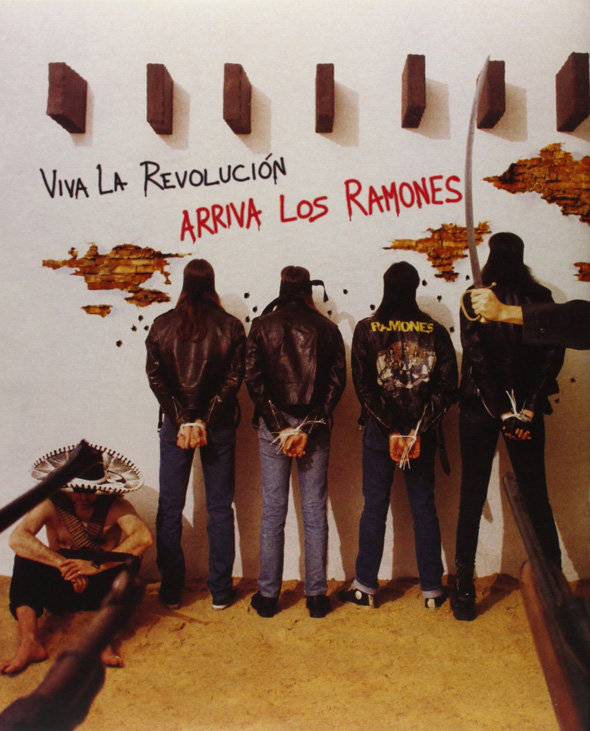 For over two decades, the Ramones built a storied career that culminated with their 1995’s farewell album, ¡Adios Amigos!. True to form, like the Ramones’ thirteen previous albums, the dark quirkiness was ever present.  Released Tuesday July 18th, 1995, ¡Adios Amigos! was produced by the Ramones’ longtime producer, Daniel Rey for Radioactive Records in the US, and Chrysalis internationally.  Although their swan song album, it is not their best-selling album. That benchmark goes to their 1976 self-titled debut album which is their only album to go gold in the US.  However, ¡Adios Amigos! is remembered twenty years later, because sadly it was the final released by the band as a whole unit.  Tragic struck and Joey Ramone was diagnosed with cancer that year, and would pass on in 2001. This would be followed by Johnny Ramone and Dee Dee Ramone within a decade of Adios Amigos’ release. Rather than focus on the extremely unfortunate events surrounding ¡Adios Amigos!, fans still hold the record near and dear to their heart, but they will never truly say goodbye to the legendary Ramones.

¡Adios Amigos! has earned the right to be among other swan song albums of 1995 such as Queen’s 1995 album Made in Heaven and Selena’s 1995 album Dreaming of You, which also were met with critical acclaim.  Even going out, the Ramones were not going out without a laugh just seeing ¡Adios Amigos! front and back covers.  Beginning with the front cover’s image of two Allosaurus wearing sombreros like they are going on vacation, this image is a digitally altered version of a painting by artist Mark Kostabi, named Enasaurs, which features the dinosaurs wearing yellow witch hats.  The back cover shows the band tied up before a firing squad. The Mexican man seated next to the band is longtime road manager Monte Melnick.

Admittedly, the 13-track album is slower to accommodate Joey’s older, sickly voice; yet, ¡Adios Amigos! dropped to mixed and positive reviews from the likes of Rolling Stone and Uncut magazines and fans alike.  Also, the album’s first track, “I Don’t Want to Grow Up,” was a top 30 hit on Billboard’s Modern Rock chart, a milestone that had eluded the band.  This track, true to the Ramones’ tongue-in-cheek rebelliousness, has a fun 1-2 beat and blazing melodic guitars as the guys lament getting older, “When I see the price that you pay/I don’t wanna grow up.”  Tongue-in-cheek as it is, there is something that feels confessional to “I Don’t Want to Grow Up.”  Of course, the very next track goes all out zany with “Making Monsters for My Friends;” still with its simple beat, the guitars weave the fun melody throughout.  The melodic “It’s Not for Me to Know” has a contemplative feel while accepting that some things just cannot be answered, “I don’t have any illusions anymore/I’ve done all that I can do.”

Breaking the sentimentality, the guys switch gears with “The Crusher,” a funny hypothetical take on what if they were wrestlers, but then, the guys return to the sentimentality with anthemic “Lie is a Gas.”  This track has a jovial beat with the accompanying lyrics of faithfulness.  Again, there seems a contemplation at play here.  “Take the Pain Away” has an immediacy from the first beat, keeping in mind Joey found he had cancer about this time, makes this song all the more poignant.  Pulling a hat trick, the sentimental “I Love You” simply states the obvious only the way the Ramones can, but it also says not to think them weak, because they can tell their feelings.  “Cretin Family” pulls the listener out of the sentimental into the darker Ramone psyche with the Punk hyper drums and guitars.  The lyrics of family hypocrisies are as the listener would expect with, “I am not so upset about my horrible self/But why don’t you go upset yourself/Hey here’s the mirror see your stupid face…”

So much of the Ramones songs are dark tongue-in-cheekiness, but then they throw out one that is just straight social commentary like the punked out “Have a Nice Day,” about the often throwaway parting statement.  Then, immediately following, is their ode to the “Scattergun.” Maybe thought of as a throwaway track to the average listener, but the speed of the piece shows force and anger, especially with the line, “I got the bead on you, she fires true/Take what you want and I’ll do what I have to do.”  The brilliant 1:41 long “Got A lot to Say” is the Ramones again making fun of that group that always has something to say, but has nothing to say.  “She Talks to Rainbows” slows the album’s tempo a bit with a folksy Rock piece that shows the guys’ talent for building a character through song about a free-spirited girl, who is out of touch with the world, but has captivated Joey.  Finally, “Born to Die in Berlin” closes out Adios Amigos with a mid-tempo, fatalistic parting aptly written by Joey and Dee Dee. Reportedly sung in German over the phone, it references death and drugs since Joey had been diagnosed with cancer and Dee Dee battled drug addiction.  There was a bonus track titled “Spiderman,” which was a punked out version of the 1967 cartoon theme.

While not considered the Ramones’ best album, ¡Adios Amigos! was a worthy addition to their discography with some heart-wrenching lyrical content, while others were straight Ramones humor, and still other deep, as if talking to friends. The band’s pioneering sound can be felt throughout their career, including standout records 1977 Leave Home and on drummer Marky Ramone’s debut with the band in 1978 with Road to Ruin. Naturally, the question that many fans continue to ponder is, would have the Ramones perhaps resurfaced at some point? Much like the Beatles, after the tragic murder of John Lennon in 1980, the Ramones’ legacy will forever have devoted fans wondering what if. Nonetheless, ¡Adios Amigos! was an apropos title that can be remembered twenty years later by a band that will never be forgotten. 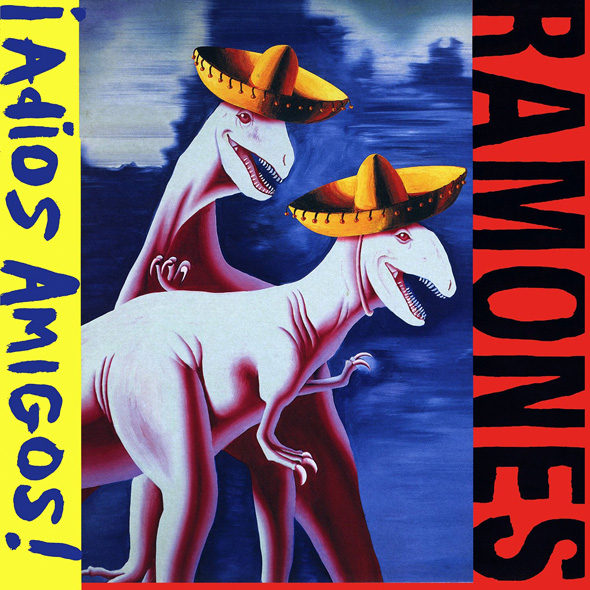