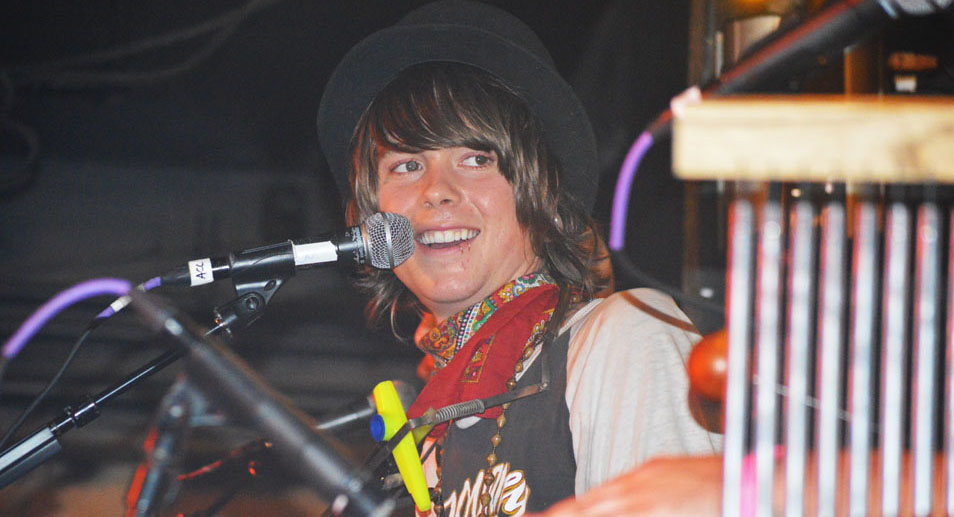 With Christmas a mere few weeks away Never Shout Never brought The Xmas Tour to Webster Hall, NYC on Friday December 6th. Along for the festivities were close friends Brian Marquis and The Downtown Fiction.  This tour immediately follows Never Shout Never’s November 25th  release, The Xmas EP.  The Marlin Room, of the multiple purpose Webster Hall, made for a perfect intimate performance for Never Shout Never’s adoring fans.  The stage was set up with Christmas lights and a blow up Santa, as kids were seemingly just welcomed to sit on the edge of the stage to partake in the fun.

The crowd first watched singer/songwriter Brian Marquis, formerly of There I Am, play some original mellow tracks acoustically.  Spicing things up, Marquis added some upbeat raspy voiced songs stressing his Americana style, that had the feet all in attendance tapping. Marquis’s debut EP, Snow Damage, is out now.

Next were The Downtown Fiction from Fairfax, VA. Now together for 5 years, the band has compiled a generous amount of pop rock songs to offer fans. They played a mix of songs, including new song “Some Place On Earth” and their hit “I Just Wanna Run” as their closer. Hearing the new track live merely added to the excitement of their fans awaiting a new album from the band in 2014.

As an increasingly building suspense spread throughout the crowd is was clear everyone was ready for Never Shout Never. Once they set up, first out was Taylor MacFee, who was of course wearing plaid as he grabbed his bass.  After a single drum and some chimes were setup Hayden Kaiser then followed.  Third came Christofer Drew Ingle with his acoustic guitar, his harmonica, and of course you can’t forget his trusty kazoo. Their opening song was “Magic”, from their Indigo (2012) album,  and it was the perfect song to begin with.  The song really got the crowd psyched to hear the rest of their upbeat good vibe set.  After a couple of songs Ingle said, “This is a cover of my favorite singer/song writer who stayed true to himself throughout all the fame” and then he began to play “Happy Christmas (War is Over)” by the wonderful John Lennon. The harmony of all three members’ voices sounded great, and they really made the song their own dreamy indie style, while keeping it similar to how Lennon sang it. Then of course Ingle’s guitar switched out for his lovely ukulele, which followed by the performance of the popular song “Trouble”. Everyone in the crowd knew every single word and sang along.  Soon after, Ingle was back on the acoustic playing “New Sound” from their new album Sunflower (2013).  During the guitar solo Ingle started tooting threw his kazoo to the beat.  Next was another new track entitled “Subliminal Messages” which Ingle whispered the secret message in the beginning of the song “everybody must get stoned, everybody must get, everybody must get everybody must get stoned”.  After the track was complete the band all agreed that was one of their new favorite songs to perform live.

The set moved on with “What is Love?” from Never Shout Never’s successful album What is Love? (2010). Most fans know it’s about Ingle’s parents divorcing and you can tell this song reached the audience on a more emotional level. The band finished the night with a wonderful anchor, “Lost at Sea”, from their album Time Travel (2011).  The track ended the night with all their voices connecting perfectly as they sang the last notes. The crowd screamed, clapped, reached out to touch their hands, and even Ingle leaned over to give a fan a hug who was standing on the side stage stairs. The Christmas spirit was in the air and Never Shout Never harnessed that feeling into the audience. Overall it was a night full of great music, positive vibes, and happy people.

Demonic (Movie Review)
Like the in-depth, diverse coverage of Cryptic Rock? Help us in support to keep the magazine going strong for years to come with a small donation.
Print page
0 Likes