New Found Glory are a band that are known for their tremendous sense of humor, a thing called personality. Now they are looking to make you sick with their upcoming album, Makes Me Sick, and their current tour in celebration of 20 years of Pop Punk. Sold out at nearly every stop along their 45-night journey, New Found Glory’s celebratory run – with the UK’s Trash Boat in the support slot – made its way to Sayreville, New Jersey’s beloved Starland Ballroom on Tuesday, March 28th.

The idea behind the 20 Years of Pop Punk Tour is simple: hit the road to let the fans know Pop Punk is hardly dead and New Found Glory (simply NFG to the anointed) will always rock, as well as to celebrate the band’s earliest albums. Each evening of the tour presents a set list containing two different NFG CDs: on this particular evening, the celebration would be composed around the group’s third studio album, 2002’s Sticks And Stones, as well as their fourth studio offering, 2004’s Catalyst. Other gigs will present nearly every album, from 1999’s debut, Nothing Gold Can Stay (hello Robert Frost!), to the more recent, 2009’s Not Without A Fight.

Opening band Trash Boat hail from the UK. The band – Vocalist Tobi Duncan, Guitarists Dann Bostock and Ryan Hyslop, Bassist James Grayson, and Drummer Oakley Moffatt – came together just three years ago, in 2014, but they have been hard at work ever since. With two EPs – 2014’s Look Alive and 2015’s Brainwork – to their credit, Trash Boat recently released their Hopeless Records debut studio album, Nothing I Write You Can Change What You’ve Been Through, last year (which has a truly awesome, artistic cover). They have toured with New Found Glory previously on their native UK soil, as well as performing at the 2016 Reading and Leeds Festivals.

With a sold out crowd in attendance and the walls of Starland Ballroom bursting to try and contain the fans, Trash Boat would take the stage to get this Pop Punk party started. Sonically reminiscent of The Story So Far (the band, not the NFG track), the band launched immediately into “How Selfish I Seem,” off their debut album. It was followed with the soaring vocals of upbeat “Tring Quarry,” Brainwork‘s “Perspective,” and the serious but rocking “Catharsis.”

Duncan took time between songs to banter with the crowd, noting that the emotional “You Know, You Know, You Know” was written for his mother. He also informed the audience that he and the other members of Trash Boat had just received their Visas to travel throughout The States, and they planned to make the absolute most of it while they could. “Brave Face” was dedicated to Duncan’s father, making it abundantly clear that this is a man who is very close to his parental units.

Trash Boat raised the bar up to a frenetic speed with the aptly-titled “Eleven,” before thanking NFG for taking them out on tour. They ended their energetic set with the Hardcore-tinged “Strangers,” hoping to leave behind a ballroom full of new friends. Thanks to their tight set of solid Pop Punk blended with deliciously devilish Hardcore moments, it was clear that Trash Boat would be gaining quite a few new fans to add to their American fanbase. 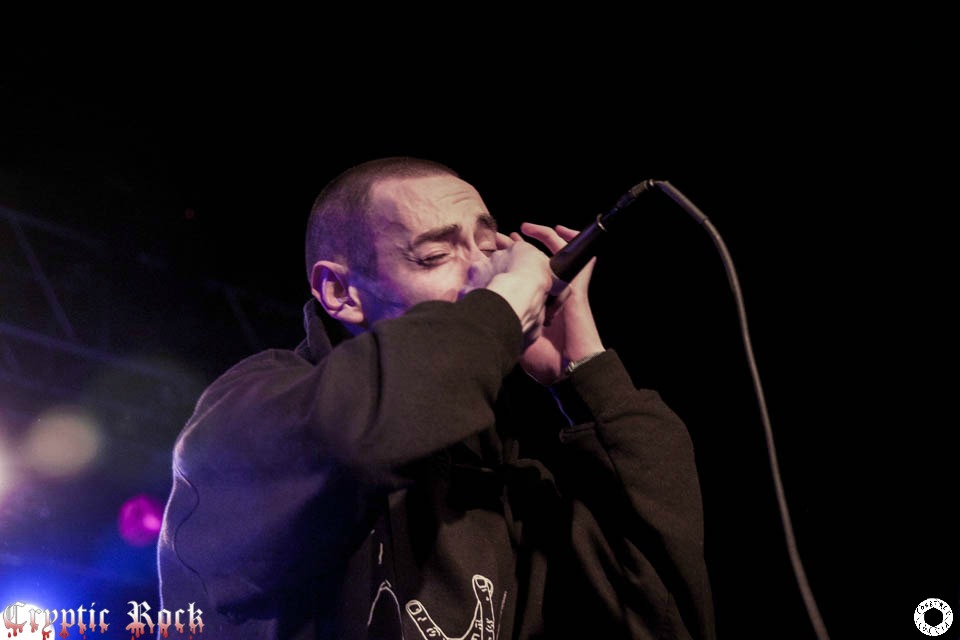 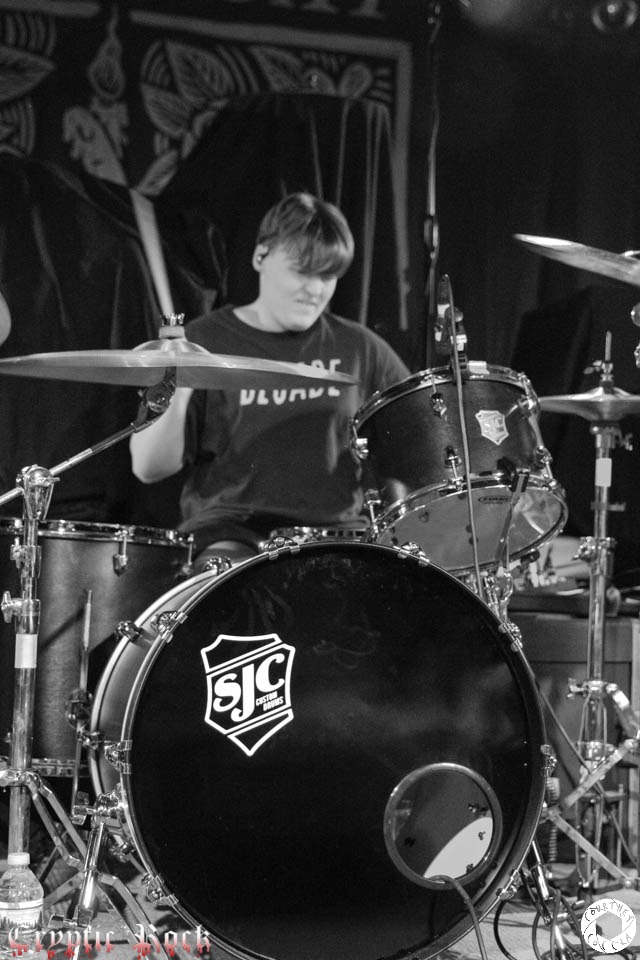 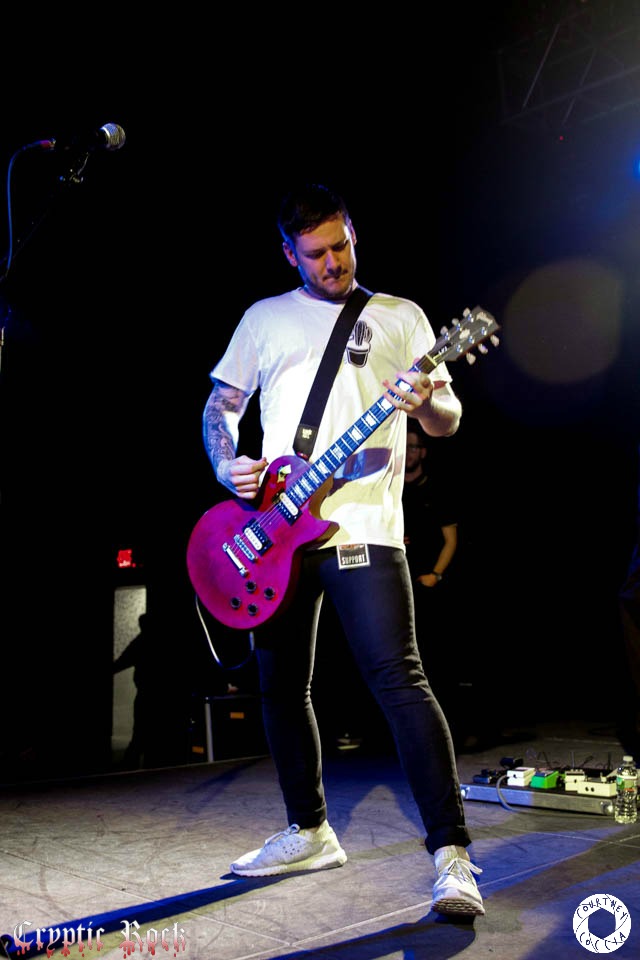 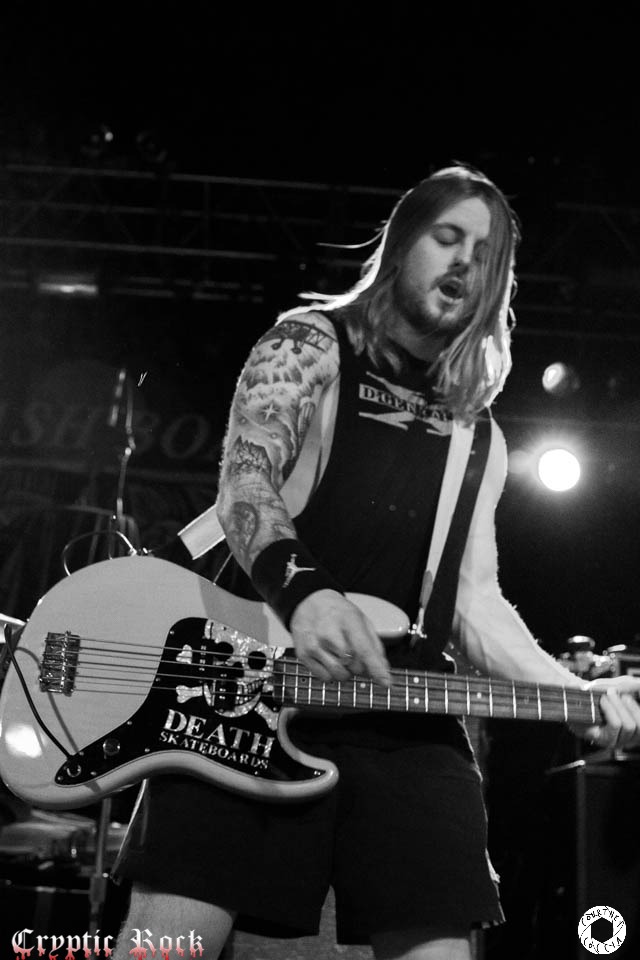 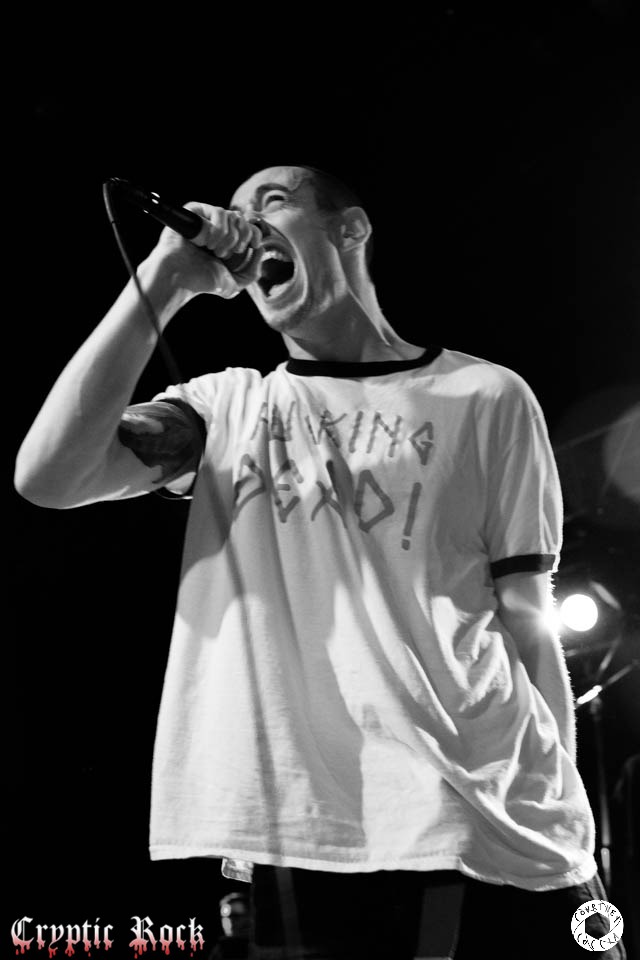 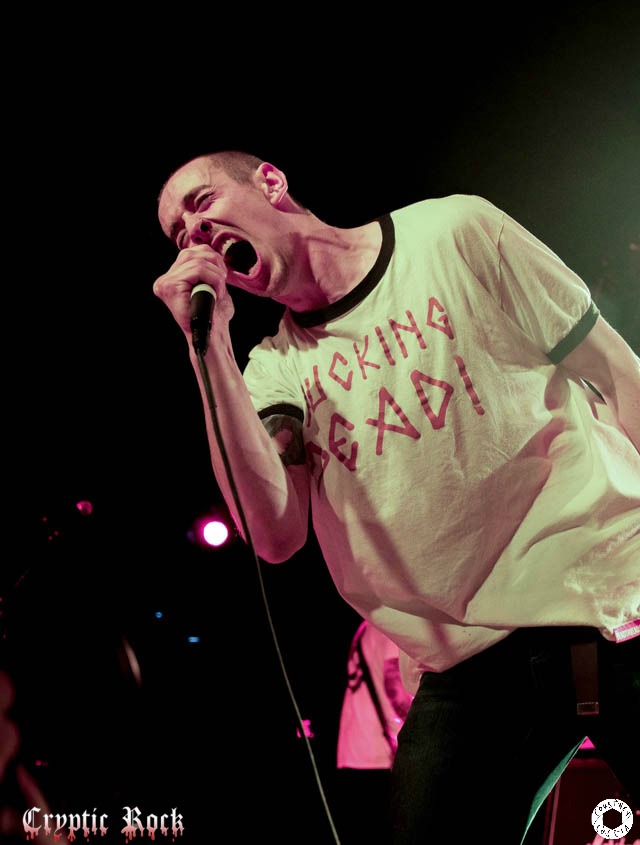 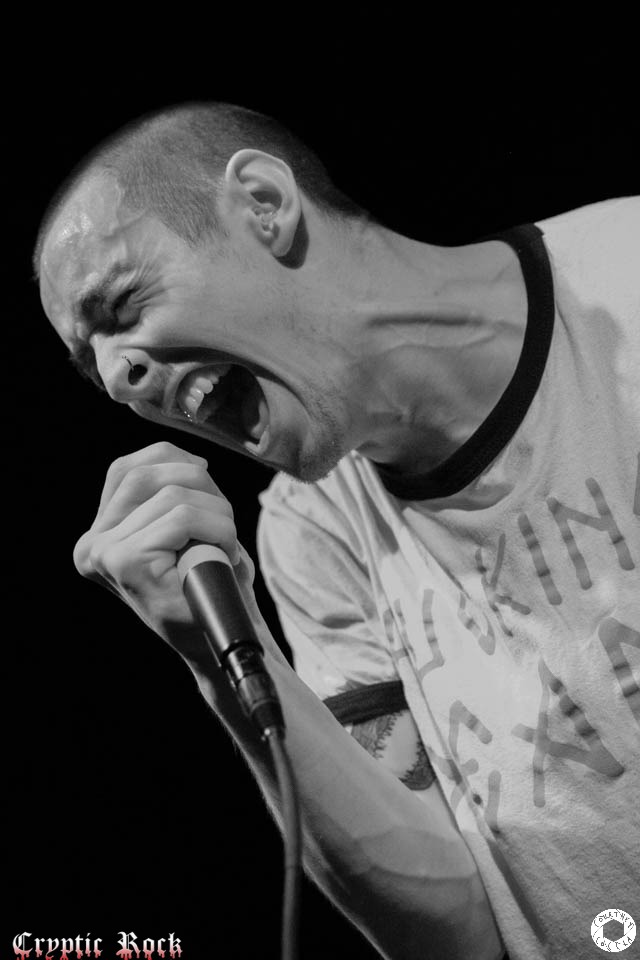 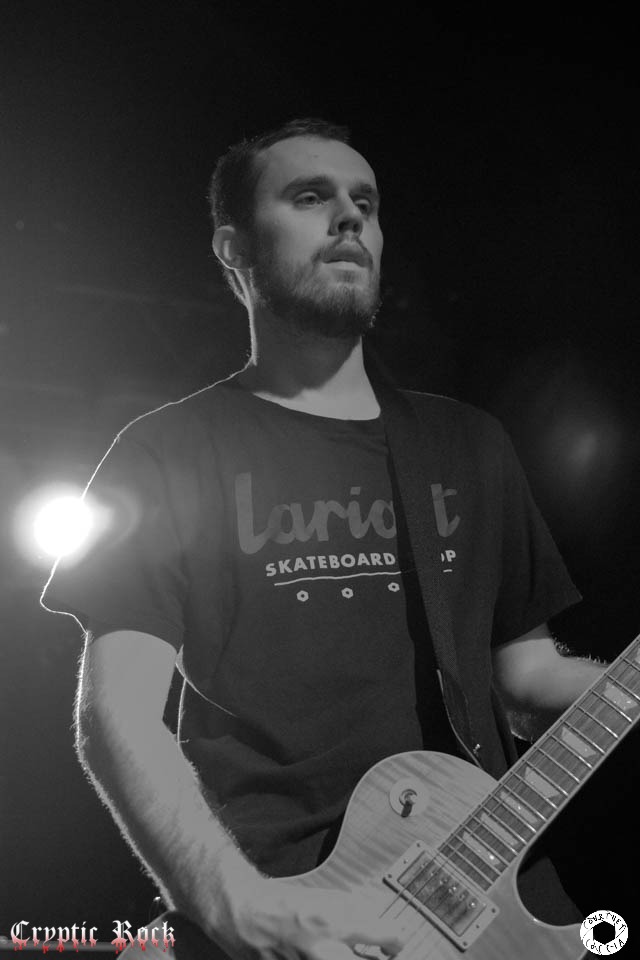 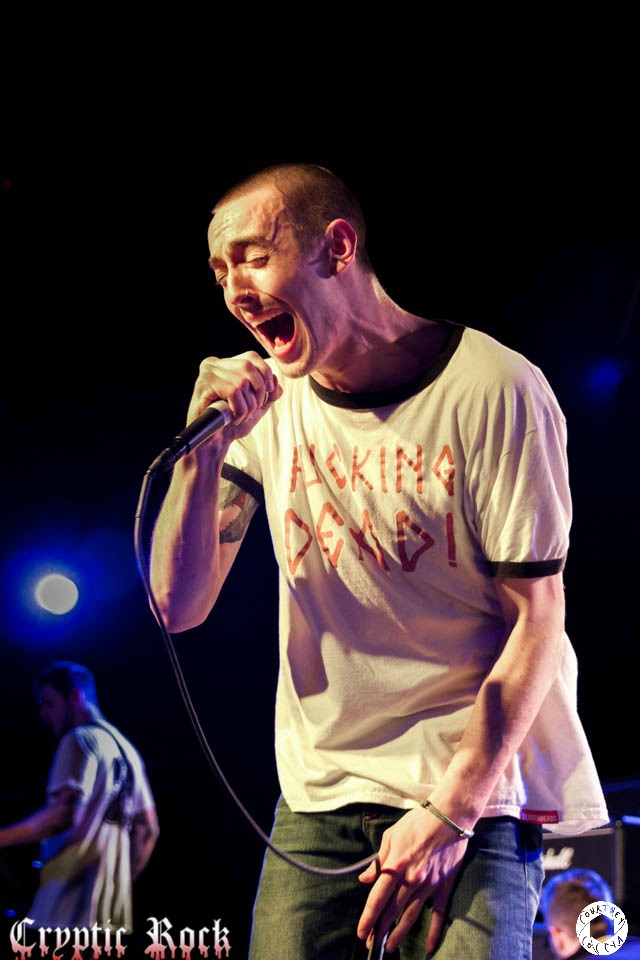 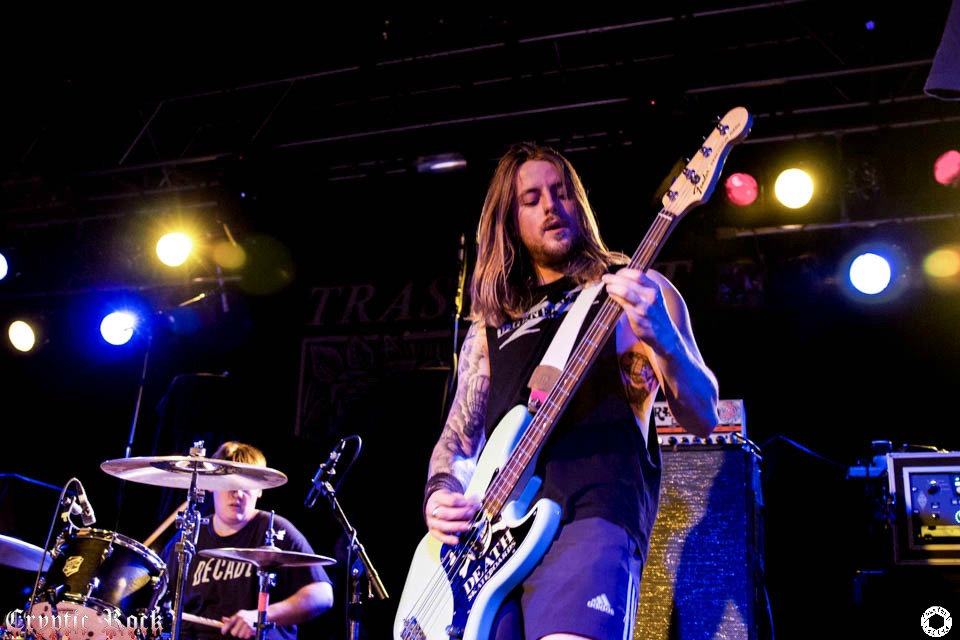 No strangers to the stage, New Found Glory are a quartet of strange beings from the planet Florida. With, yes, 20 years on the Pop Punk scene, this quartet – formerly a quintet before the departure of long-time Guitarist Steve Klein in 2013 – are well-versed in what it means to have abundantly overflowing personality, musically and personally. If you have seen any of the band’s DVDs or behind-the-scenes footage – or even their video for the cover of traditional holiday track “The Christmas Song” – then you know all too well the antics of these funny fellas. Their forthcoming, ninth studio album, Makes Me Sick, will be released on April 28th.

On an evening when the set-list is somewhat prearranged, there is an intense sense of excitement permeating the air; fans know that those rare musical treats will, in fact, be performed on this night. From the second they purchased their tickets, fans already knew the bulk of tonight’s setlist, but that did not stop New Found Glory’s Jersey contingent from being amped on high to see some of their favorite albums performed live in their entirety. Some bands take to the stage for these nostalgia fests and perform their albums start to finish, but never ones to follow a simple script, NFG offered a complete mixed bag from start to finish.

They took the stage to fan favorite “Understatement,” and then it was, not literally, “All Downhill From Here.” Amped to be back at the Starland Ballroom and performing for such a diehard audience, the members of New Found Glory – Vocalist Jordan Pundik, Guitarist Chad Gilbert, Bassist Ian Grushka, and Drummer Cyrus Bolooki – launched into their live blend of Sticks And Stones and Catalyst (Stickalyst, if you will). The relationship advice of “Never Give Up” and fast-paced dancer “Who Am I” continued the party. Sticks And Stones‘ “Something I Call Personality” has always been a hugely beloved song amongst fans, and it was no different on this evening. The crowd-surfers were in full effect and remained so for another popular offering, the pogoing “Truth of My Youth.” Pundik and Gilbert bantered freely with the audience between songs, as is the usual throughout any NFG set.

One of the band’s more poignant tracks and one that is less common to their recent sets, “Belated,” continued the nostalgia fest. Headbanging good times were had with “At Least I’m Known for Something,” where a chorus of fans sang along to the ironically triumphant lyrics: “Cause I’m best known for failure, best known for giving up.” The crowd-surfing chaos of “The Great Houdini” followed, but before the band could launch into “Sonny,” off Sticks And Stones, Gilbert took to the microphone to explain that, for this tour, they would be performing two entire albums from their oeuvre per night; a total of approximately 27 songs per evening. Another trio of beloved favorites followed: “No News Is Good News,” “Head On Collision,” and “Doubt Full.”

Sticks And Stones‘ hit “Failure’s Not Flattering” was hardly short on crowd-surfers, who seemed to glide over the audience in massive quantities. Inspired, NFG continued their never-ending setlist with the fabulously infectious trio of tracks “It’s Been A Summer,” “Your Biggest Mistake,” and “I’d Kill To Fall Asleep.” Fortunately for everyone in attendance, they did not, in fact, succumb to any bouts of narcolepsy.

The only song performed on this night that was not from either Sticks And Stones or Catalyst, “Happy Being Miserable” is the first single/video from the band’s upcoming release, Makes Me Sick. The crowd was ecstatic for the surprise inclusion of the song, as well as the sneak peek of new NFG to come. If you want to feast your eyes on one epic pie-eating contest that ends in projectile vomiting for all, go check out the video!

NFG returned to their previously-scheduled broadcast with “This Disaster,” “Over the Head, Below the Knees,” and “Singled Out.” Throughout the entire set, Pundik and co. managed to keep the crowd on the very tips of their toes, rocking out, and devouring every single second of their set. In the usual New Found Glory fashion, Gilbert and Grushka were all over the stage while Bolooki held down an always solid beat on the drums. Although they do amazing impressions of human pogo-sticks, NFG did slow their roll to tackle crowd-pleaser, the Pop Punk love song “I Don’t Wanna Know,” followed immediately by the break-up track “Forget My Name.” “Tell all my friends I’m dead,” the crowd mirrored Pundik’s vocals on the band’s anthemic track from Sticks And Stones. The bittersweet “The Story So Far” (the song, not the band) followed.

For their encore, New Found Glory began with the ironically apropos, at least title-wise, “Ending in Tragedy.” Fortunately for the bursting Starland Ballroom, this was no premonition and the show continued through Catalyst‘s “Intro,” segueing into and ending with possibly the band’s biggest hit to date, the cheeky and fun “My Friend’s Over You.”

From start to finish, New Found Glory’s set was a dream for die-hard fans, all of whom had a wonderful return to yesteryear thanks to the band’s retro setlist. Never ones to fail at putting on an amazing, high-octane live set, New Found Glory did not disappoint the sold out crowd in Sayreville. If you have not seen this band live, where have you been? Go now and help them celebrate 20 Years of Pop Punk! 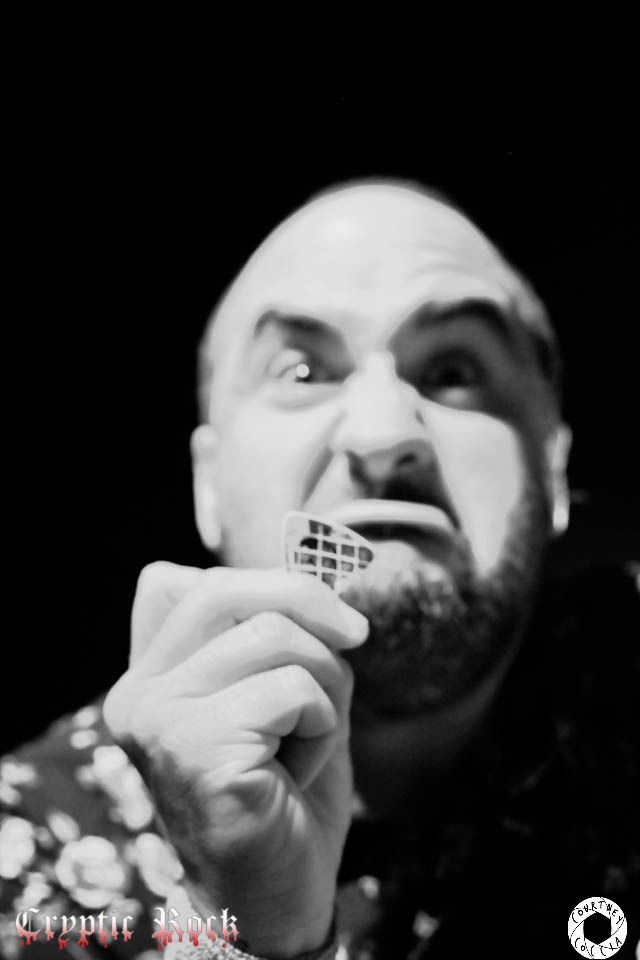 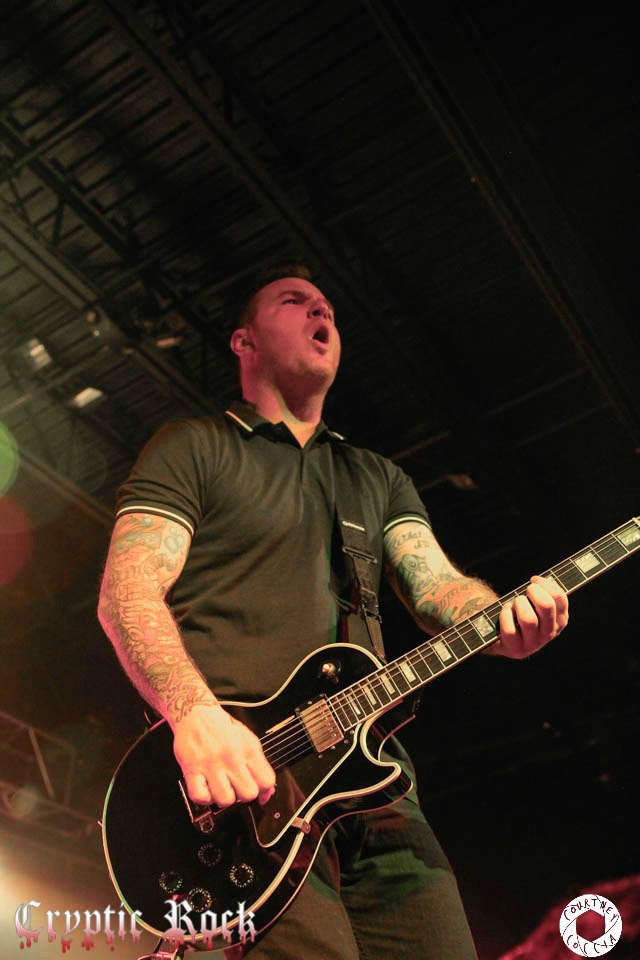 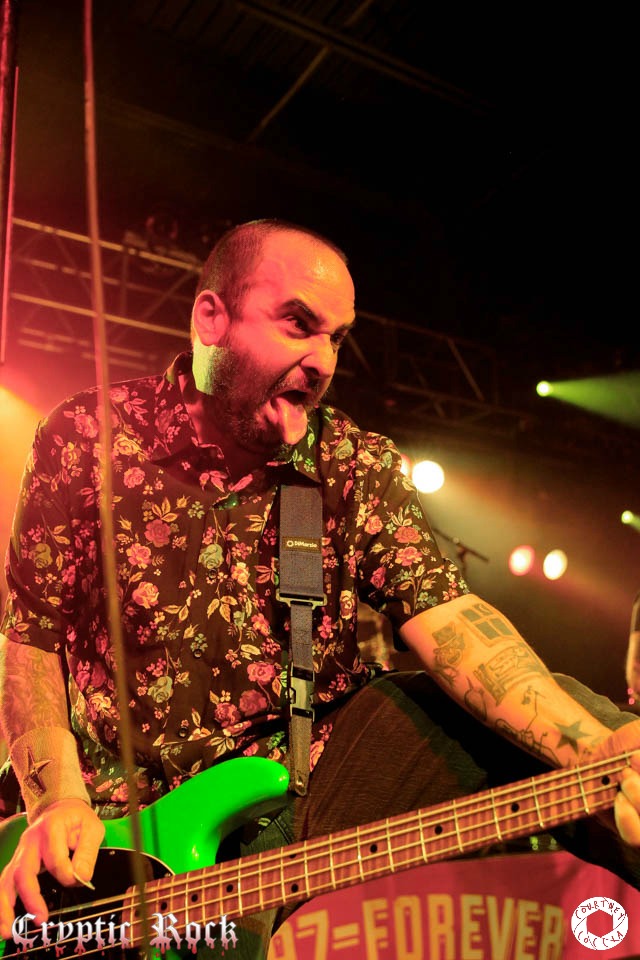 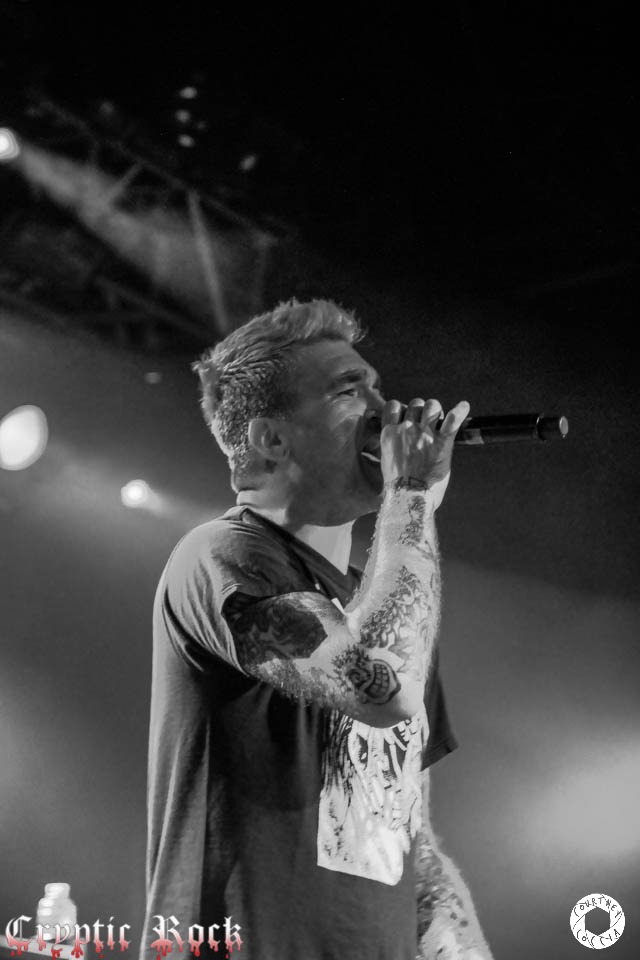 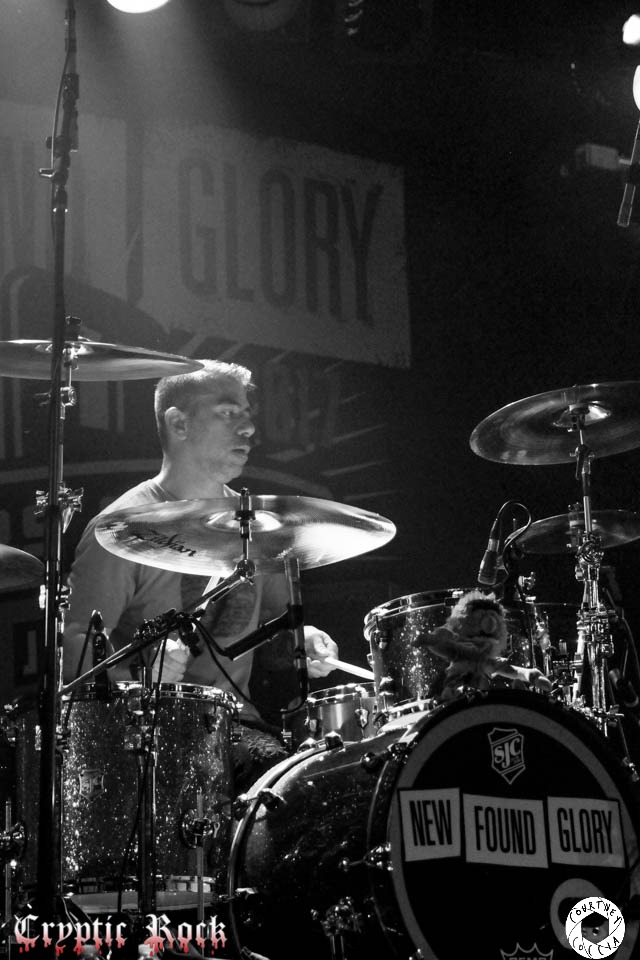 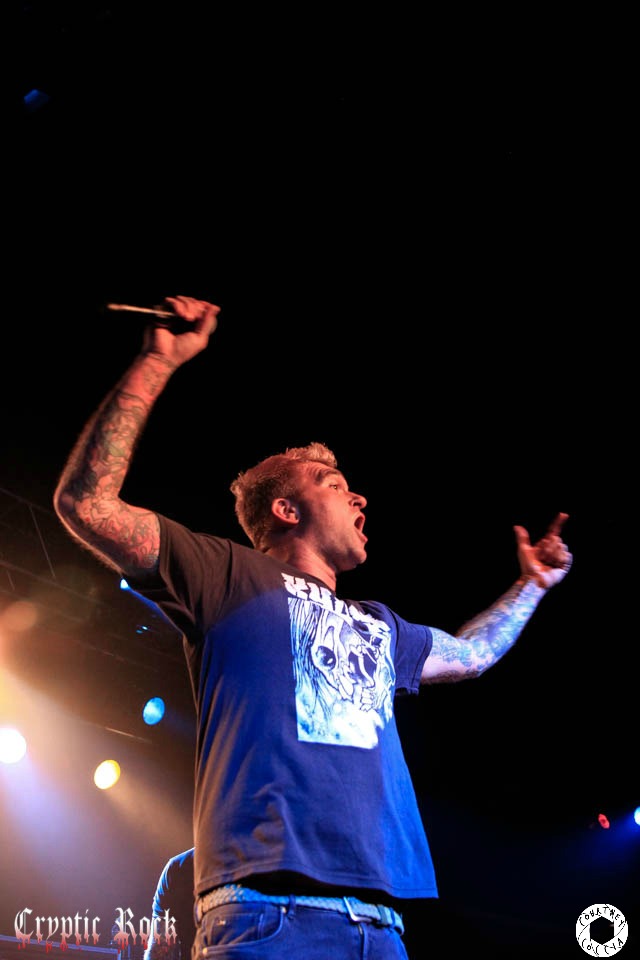 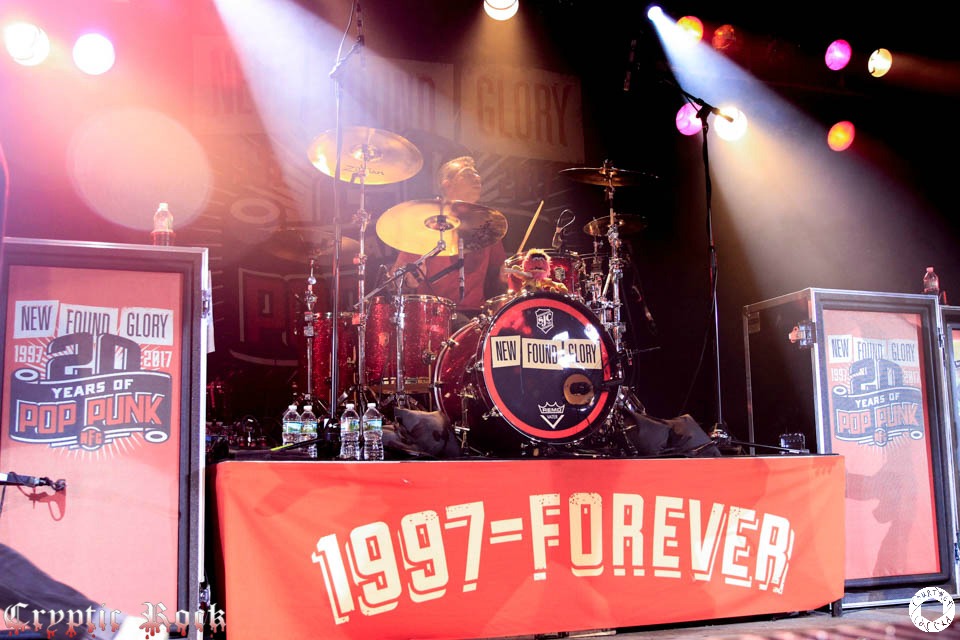 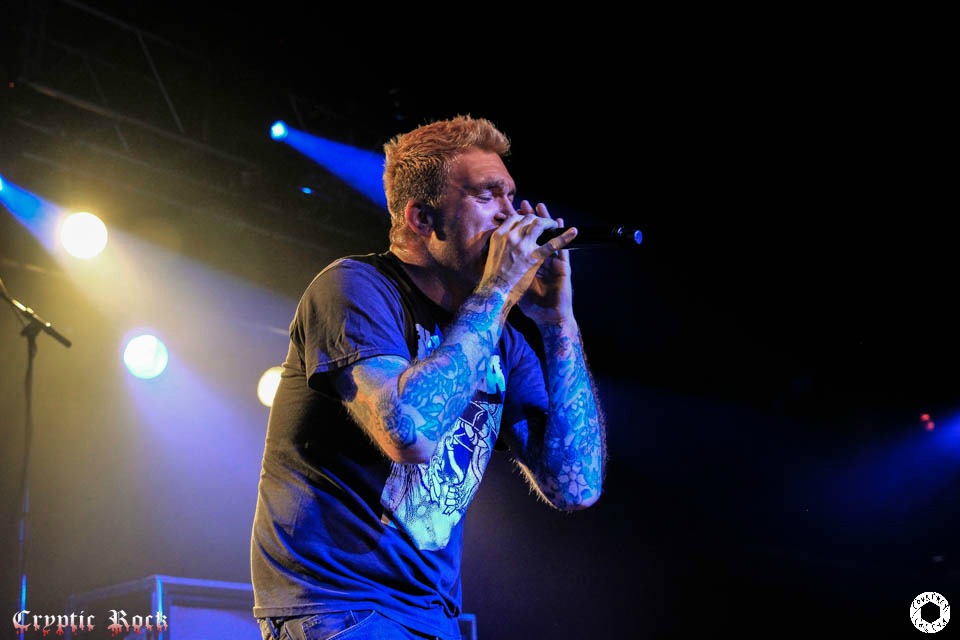 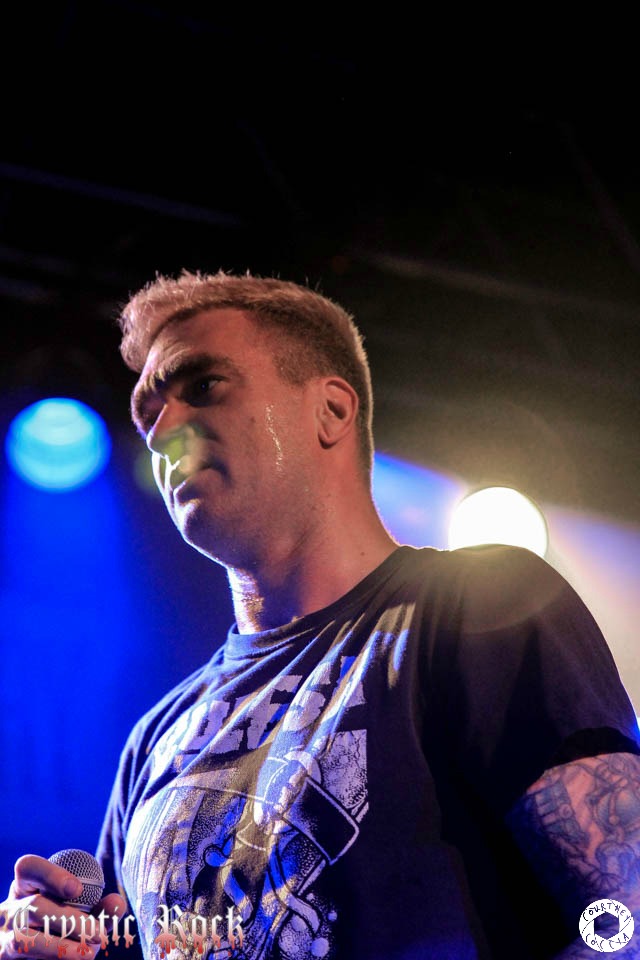 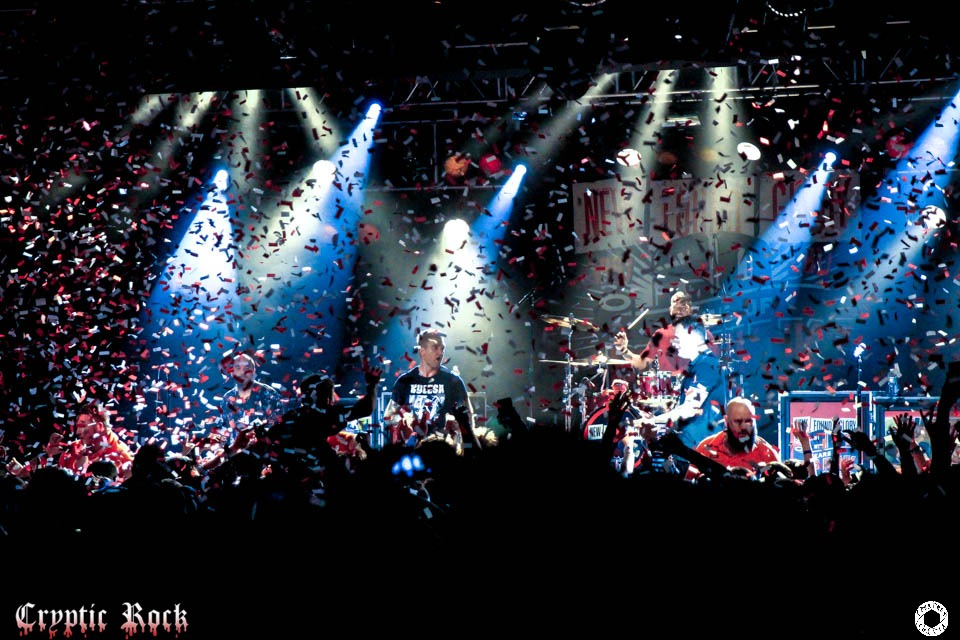