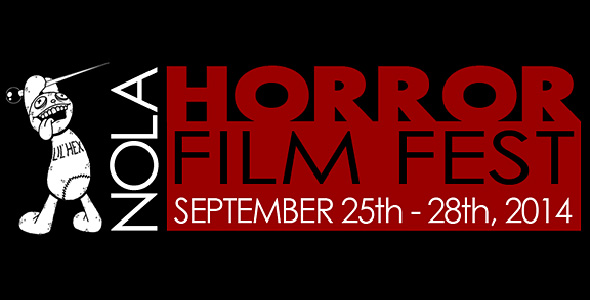 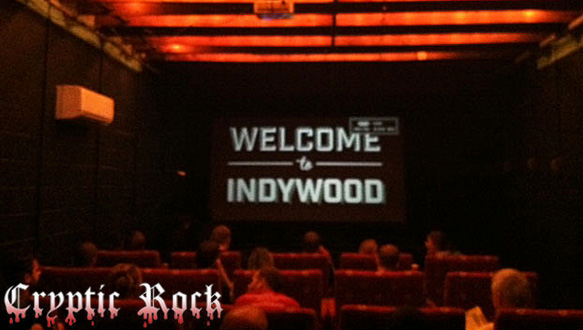 This weekend, Crypticrock had the opportunity to check out some of the highlights of the New Orleans Horror Film Festival. Although this was the festival’s fourth year, this was the first time it was held at the Indywood Theater, located on Elysian Fields Ave., which divides the hip Marigny and Bywater neighborhoods. In previous years, screenings took place at various locations on tourist-saturated Bourbon Street.

Indywood Theater, where huge plush seats are flanked by black cinder block walls, the ceiling beams are left exposed, and alcohol flows freely — Indywood has a B. Y. O. B. policy and provided free beer for some of the screenings — serves as the perfect environment for horror fans, a demographic who can truly appreciate grittiness.

The festival ran from Thursday September 25th  through Sunday the 28th, kicking off with a party and pub crawl, followed by a marathon of film screenings, a panel on special effects makeup, and screenplay readings. The event concluded with an awards ceremony, where event founder J. T. Seaton announced the winners in ten categories.

Award winning films are as follows:

The Barista (Short; Director Rebekah McKendry; Writer David Ian McKendry) A disgruntled cafe customer accuses his server of slacking on the job — but not in the way you might think. This film is not quite horror, but it is laugh-out-loud funny.

Still from The Barista

Still from The Wyatt

Sara Gorsky in in  Chrysalis (Feature; Director John Klein) A brooding, post-apocalyptic film about the survivors of an infectious outbreak which, naturally, turns people into zombies.

Savageland (Directors Phil Guidry, Simon Herbert, and David Whelan) A convincing faux documentary/found-footage film about the destruction of a small Arizona town near the Mexican border. This film addresses fears both real and imagined and challenges the audience to decide where the real threats are.

Grave Shivers (Short; Director Brent Sims) At only 14 minutes, Grave Shivers is actually an anthology including three shorts involving classic horror themes with a liberal dose of comedy. The first and final segment might be familiar to Internet denizens. The former appears to be based on a popular and charming illustration, while the latter portrays the events that take place in an oft-shared two sentence microfiction piece. The second segment, while not reminiscent of any particular meme, might have something to do with a recent panic regarding Girl Scout cookies. Although these shorts are familiar, their pop culture connections are not revealed until their conclusions, and since the source materials are an illustration, a written text, and a cookie-related controversy, Grave Shivers does not lack in originality by any means.

Tales of Poe (Feature; Directors Bart Mastronardi and Alan Rowe Kelly; Cinematographers Bart Mastronardi, Azmi Mert Erdem, and Dominick Sivilli) An ambitious anthology film based on the works of patron saint of horror Edgar Allan Poe. The first two segments, featuring characters driven to violence by greed, fear, and jealousy, are reminiscent of Tales from the Crypt. The third is a surrealist interpretation of the poem “A Dream Within a Dream,” and features nightmarish images interspersed with fleeting moments of beauty.

A favorite of both audience and judges was Blood Punch, (Director Madellaine Paxson; Writer Eddie Guzelian), which won Best Feature Film. Blood Punch is the first feature film for Paxson, Guzelian, and their production team (Ethan Pines, Fleur Saville, and Fred Schaefer). However, both cast and crew had previous experience together, working primarily on children’s television shows including Kim Possible and Power Rangers R. P. M. The team took quite a few steps away from their G-rated roots to create the violent romp that is Blood Punch. The film centers around Milton (Milo Cawthorne), a genius who’s been sent to rehab after getting caught cooking meth on his college campus. Skyler — the crew asserts that any resemblance to Breaking Bad characters is purely coincidental — a fellow patient played by Olivia Tennet, convinces Milton to team up with her and her boyfriend, Russell (Ari Boyland), to cook meth. Since Milton’s services will only be needed for one day, he agrees, even though Skyler has warned him that Russell “is the devil.”

Naturally, all hell breaks loose, and with its sharp wit and ample charm, the film is reminiscent of a very dark, blood-soaked version of Groundhog Day (1993). The film begins in media res, with a dismemberment in the first five minutes, and maintains a rapid pace throughout. The plot is clever and engaging, and just when the viewer thinks she’s got everything figured out, the film reveals a new twist. It has not been picked up by a distributor just yet, but Blood Punch is a wickedly fun film that is worthy of a wide release.

Overall, the film offerings were diverse, and viewers were treated to the frightening, the surreal, the comedic, the grotesque, the provocative, and even the beautiful. Delighted audiences and sold-out screenings were indicative of the high quality of the films presented. Blood Punch director Madellaine Paxson can attest to this fact. Upon receiving her plaque, she remarked that, because the films were of a higher caliber than those she had seen at any festival so far, the New Orleans Horror Film Festival was by far her favorite.