Night of the Creeps – It is 30 Years Later…Thrill Me! 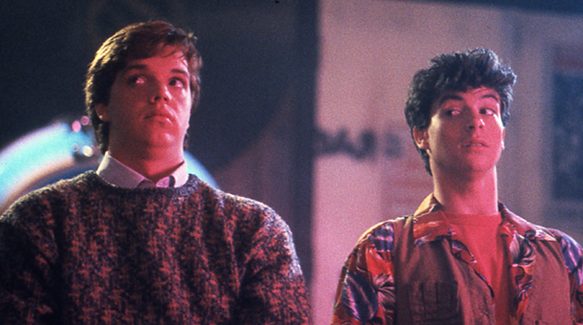 A homage to B Horror films, it all begins in 1959 as a meteor crashed on Earth. Upon investigation by Johnny (Ken Heron: debut and only film), cue The Diamonds’ haunting “The Stroll,” the meteor is actually a vial of mind-controlling alien slugs that make their home inside of Johnny. Twenty-seven years later, cue ’80s cut, Jane Wiedlin’s “Blue Kiss,” Chris (Lively) and C.J. (Marshall), in hopes of pledging a fraternity to impress Cynthia (Whitlow), unknowingly release Johnny from cryogenic stasis.

Johnny grabs Chris and C.J. and they run away “screaming like banshees.” Johnny makes his way back to the sorority he last visited and the slugs escape to wreak havoc on Corman University. With the help of Detective Ray Cameron (Atkins), it is up to the boys and Cynthia to rid the University of the slimy scourge before they can take over the world.

With an estimated budget of $5,000,000, Night of the Creeps was shot from February 9th, 1986 through April 27th, 1986. Locations included California State University Northridge, Griffith Observatory, University of Southern California, Royce Hall at UCLA, San Fernando Valley, and Castaic Lake. Unfortunately, Night of the Creeps only grossed $591,366 domestically, making it a bomb at the box office. However, like many cult films, this bomb gained the love of multitudes of fans over the years.

As stated, Dekker set out to make an homage to the Sci-Fi/Horror B-movies of the 1950s and 1960s and succeeded brilliantly while keeping it contemporary…well, contemporary for 1986. All the featured players had something in common. Even though not all of their last names were mentioned, they all had the last names of famous Horror directors. Jason Lively portrayed Chris Romero, the dorky, love-chasing underdog. Steve Marshall played J.C. (James Carpenter) Hooper, Chris’s cheesy, one-liner, best friend and roommate.

He also has some good lines, like when Cindy goes into the frat and Brad says, “Oh, great! She’s going into a frat,” to which J.C. replies in the most sarcastic and catty way possible, “Oh, that bitch!” J.C. was actually a very unique character in that he was a main character that was disabled, something that was never really seen before. He had to use crutches, but it was never made clear as to what actually happened that required the use of crutches, only that he couldn’t walk without them.

Jill Whitlow played the sweetheart knockout, Cynthia Cronenberg. Sure she was dating the main douche on campus, but she soon finds out she can do much better. Allan Kayser played Brad, who was the antithesis of the big-hearted dimwit, “Bubba,” on Mama’s Family. Brad was the aforementioned big douche on campus and head of the Beta Epsilon Fraternity. To prove that his douchiness knows no bounds, he trips J.C. in front of a crowd of people. Genre mainstay, Dick Miller (A Bucket of Blood 1959, Gremlins 1984), even had a small cameo to round out the full homage package. 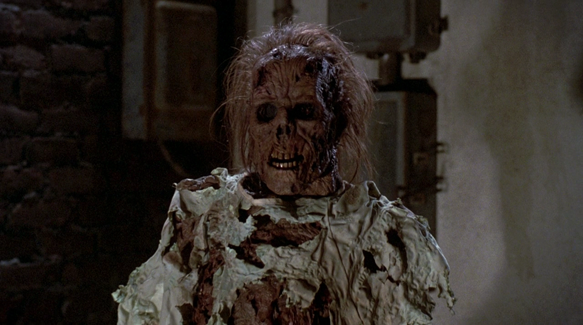 All the actors did a great job, but the showstopper was none other than Tom Atkins’ Detective Ray Cameron, a hard-nosed old fashioned detective, haunted and tormented by the memory of his girlfriend that was hacked to pieces by a madman in 1959 while he was on duty. He is equally tormented by the covered-up revenge he got on the killer.

Tom Atkins brought a lot of deadpan humor to the role of Cameron, as well. He portrayed Detective Cameron as if he were a cop from the Humphrey Bogart era, even driving a badass 1950 Ford Custom to complete the ensemble. Atkins’ greatest moment in the film, though, is when he is telling the story of his revenge to Chris over a shot of whiskey. He seems to lose himself in the memory of the girl who got away and got killed and how he got the killer in the end.

Jason Lively’s performance is equally good in this particular scene as he looks extremely unsettled, which is really all that scene called for. In addition, as Detective Cameron is telling the story, flashbacks are shown of him disposing of the killer’s body in 1959. Then, in present time, at Cynthia’s sorority, the decaying Killer is shown hacking his way up through the House Mother’s floor with an ax.

Night of the Creeps boasted a special makeup FX crew of around eleven people, but two of them happened to be young, yet-to-be-famous monster makers, Howard Berger (FX Crew: Day of the Dead 1985, Bride of Re-Animator 1989) and Robert Kurtzman (Special FX: Evil Dead II 1987, Phantasm II 1988) of KNB fame. Greg Nicotero (FX Crew: Misery 1990, Preacher TV Series) was an extra in Night of the Creeps, but not credited for any special FX according to IMDB. The special FX really ramp up after the bus crash when all the dead, disfigured frat boys start shambling back to the sorority. Some are missing body parts, others are missing their faces; they’re just a bloody mess right out of Night of the Living Dead (1968).

On November 18th, 2011 Night of the Creeps was shown on 35mm at the Andy Warhol Museum in Pittsburgh, PA. Afterwards, an informative Q&A panel was done with Director Fred Dekker and Actor Tom Atkins. Dekker discussed how he was really not happy with the tacked on jump-scare theatrical ending where the dog comes back. The original ending shows the slugs escaping from a zombified Detective Cameron into a cemetery and a large alien spaceship still searching for them appears. It was not done when Dekker showed the execs, as there were a lot of mattes and placeholders. He explained what was going to happen, but the execs “didn’t get it.” They suggested coming up with a “cheap scare ending.” Dekker suggested the dog ending, which was a joke, and the execs ate it up. Dekker goes on to say, “Never, never, in a Hollywood or any creative environment tell anyone a bad idea if there is any possibility they’ll say ‘yes go do it.'” Luckily, the original ending was put onto the DVD/blu-ray. 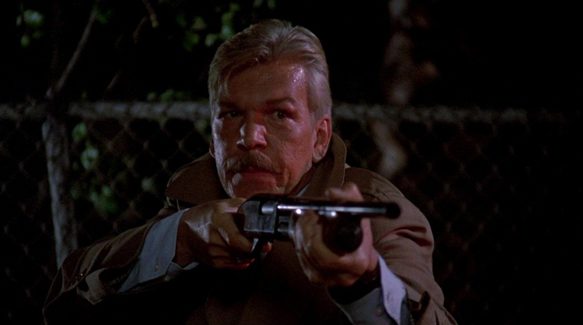 The MC asks Tom Atkins why Night of the Creeps is his favorite film. To which Tom Atkins replies, “Oh my god! You just watched it! It’s my favorite role because, I got all the great lines ever written for anybody in a film thanks to Fred. I mean, my Lord: ‘Thrill me,’ ‘Miller Time,’ ‘Spanky,’ ‘Alfalfa.’ My favorite: ‘Well girls, I’ve got some good news and some bad news. The good news is your dates are here.’ (‘What’s the bad news?’) ‘They’re dead.'”

Critically, Night of the Creeps received mixed reviews. Rotten Tomatoes reports that 69% of 13 critics gave the film a positive review; the average rating was 6.5/10. Nina Darnton wrote that the film, though derivative, “shows a fair ability to create suspense, build tension, and achieve respectable performances.” Nigel Floyd of Time Out London wrote that the direction and special effects are poor, but the film is still “enjoyable enough in a ramshackle sort of way.”

Michael Gingold of Fangoria rated it 3.5/4 stars and called it “one of the year’s most surprisingly entertaining fright features, one that homaged practically every sub-genre imaginable, yet kept a sure hand on its tone and never descended into spoofery.” Steve Barton of Dread Central rated it 5/5 stars and called it “a classic in every sense of the word.” Christopher Monfette of IGN rated it 7/10 and wrote that the film “shows its age” but is scary, gory, and has plenty of quotable lines. 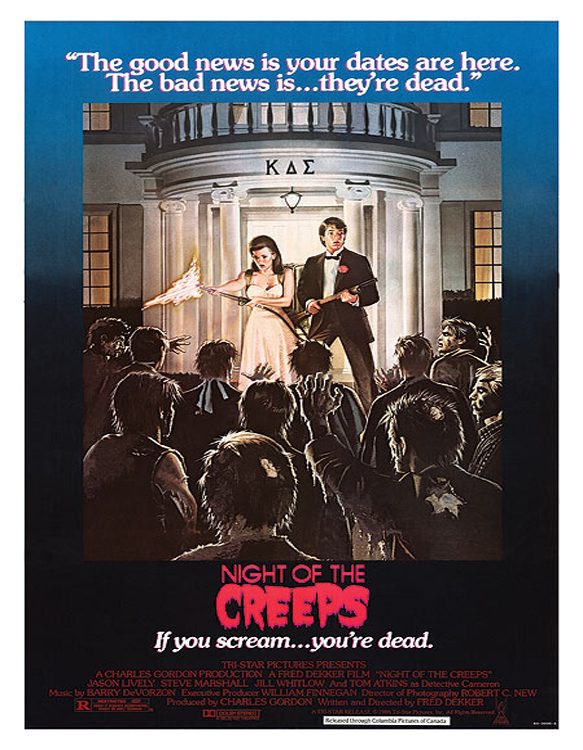